It's been more than a week since Tony Romo announced his retirement, and the tributes in his honor have been plenty. There have been tributes from fans, from his teammates, from the Dallas Cowboys organization, and even the Dallas Mavericks have paid tribute to Tony Romo. While it may be a bit late to the party, this is my little tribute to one of my favorite Cowboys ever, and the QB I watched growing up.

Here's to you Tony, thank you for the memories!

There were more moments I wanted to include in the list, but left out, so make sure to comment with your favorite Tony Romo moments. Here are mine, I hope you enjoy them, #CowboysNation.

I mention this spin specifically because it was against one of the greatest defensive players of all-time.

On second down and four to go, Tony Romo snapped the ball. J.J. Watt did something few can by bullying Tyron Smith with a speed rush to get to number 9. Romo, with Watt just a few steps way, executed a perfect spin.

Watt ended up on the ground while Romo threw a 43-yard TD pass to Terrance Williams. This is an honorable mention to Tony Romo's signature spin move. While there were many, this might have been the best one.

That's something you don't hear every Sunday. But if you watched the Dallas Cowboys play the then St. Louis Rams in 2007, you probably said something similar.

After a high snap on third and three, Romo chased the ball 30 yards behind the line of scrimmage (he kicked the ball, too).

When he finally picked it up he managed to get back to the line of scrimmage and four more yards, including the first down.

We all knew  Tony Romo was in the house.

When the Cowboys played the Indianapolis Colts in 2014, they had fun and secured the NFC East title by beating the Colts 42-7.

But Tony Romo was on fire that day. He ended the day with four touchdowns and a new Cowboys franchise record. He became the QB with the most passing yards in the history of the franchise.

While maybe it wasn't one of the most exciting games in Romo's career, I loved this moment. He broke the record by throwing a 25-yard TD pass to Jason Witten… my two favorite Cowboys making history.

The Cowboys started off with a couple of turnovers; Dez Bryant went down injured and Dallas was facing adversity. With the score at 26-20, 1:29 on the clock with no timeouts, Tony Romo settled in and drove Dallas down the field.

With under 15 seconds to go, on third and two from the 11 yard line, the Cowboys snapped the ball. After dropping the ball and picking it up, he threw the TD pass to Jason Witten and won the game.

We never expected that game would become Tony Romo's last comeback win in his career.

I can't remember being as excited about a meaningless game as I was for last season's week 17 matchup against the Philadelphia Eagles.

Dak Prescott and the Cowboys had already clinched the number one seed in the NFC and had nothing left to play for. They were visiting Philly and there was nothing to be excited about that week… except that Tony Romo was going to play some football.

During the second quarter, he led a TD drive. Cowboys Nation went completely crazy rooting for Tony, our QB, one last time. Seeing Tony walk back to the sidelines, smiling after his last play as a Dallas Cowboy was, for sure, something special. 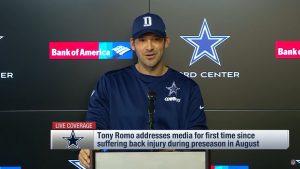 Tony Romo spoke in a press conference last November. After asking for a chance to compete with Dak for the starting role and being denied, he decided not to be a distraction and spoke about what many already knew about Dak Prescott: “He's earned the right to be our quarterback.”

Romo was a class act. He stood in front of the media at The Star in Frisco and put the final point on the debate everyone was talking about. Romo did what was best for this football team. One of a million reasons to thank Tony.

#4 Beating the Lions in the Playoffs

I remember this day like it was yesterday. I watched the first half of this game in a restaurant. I was out with my family for a New Year's trip to Las Vegas. Behind me, an annoying Lions fan was making fun of the Cowboys.

You can imagine my frustration.

When halftime came, I ran to the hotel room. Little did I know, I was about to witness an epic comeback, engineered by none other than Tony Romo.

With all the time in the world to throw, he stood patiently in the pocket and threw a perfect pass to T-Will, and walked away with a win in the playoffs.

#3 Losing to the Denver Broncos 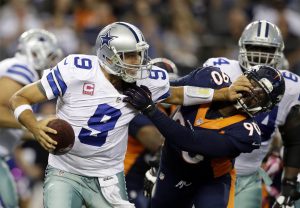 Yeah, I included a loss in this list, but this game describes Romo's career perfectly. Facing the 2013 record-breaking Denver Broncos, led by Peyton Manning, Tony stood up.

He threw for 506 yards and five touchdowns. Tony played at the level of All-Time great Peyton Manning.

Unfortunately, the defense did not step up. Denver didn't punt once that day.

Why does it describe his career perfectly? Because everyone remembers the interception Romo threw at the end of the game. Not the five touchdowns.

People don't remember Tyron Smith stepping on Tony's foot right before that INT. And nobody remembers 9's incredible performance in this game. But we do.

#2 Through a Punctured Lung

In 2011, when the Cowboys visited the San Francisco 49ers, Romo punctured a lung and a fractured rib in the third play of the game. At one point after halftime, Tony looked to be done for the day, but he wasn't.

He came back to the field and led the Cowboys to an OT win, throwing for 345 yards and two touchdowns.

Tony Romo was a hero once again.

#1 Beating the Redskins With an Injured Back

Dallas had to win their next two games if they wanted to play in January, and Romo was playing with an injured back. With 3:39 left on the clock, the Cowboys were trailing by six.

Tony engineered a comeback drive and it was something that I'll never forget. After every single play, Tony Romo looked to be in pain. On one play in particular, he ran out of the pocket and you just knew every single step he took hurt him.

He didn't care though, that play resulted in a 51-yard pass to Terrence Williams.

I thought, “No way he can do that again…” but on the final play, he scrambled in the pocket again before tossing the ball to DeMarco Murray. Murray caught it, and scored the game winning touchdown.

That's my favorite memory of Tony Romo. What he pulled off, can be described in one word: heroic.

What are your favorite moments?

Mauricio Rodriguezhttps://www.facebook.com/PrimeroCowboys/
I love to write, I love football and I love the Dallas Cowboys. I've been rooting for America's team all the way from Mexico ever since I can remember. If you want to talk football, I'm in... You'll find me at @MauNFL.
Previous article
2017 Cowboys Draft Target: Louisiana Tech S Xavier Woods
Next article
Cowboys Mock Draft: Double Dip At Safety And A Playmaking WR?

Definitely one of my top Tony Romo moments.

Nobody ever mentions the Buffalo game! He had 7,326 turnovers but still brought us back from 11 points down (i think) in the last couple of minutes!!!! Classic Romo deliciousness.