When football season ends we find ourselves in a “what do I do now?” sort of space. In mid-February football-hungry folks are resorting to getting stoked for some NFL Combine action while counting down the days until – and dreaming up all sorts of hypotheticals in regards to – NFL Free Agency starts.

It's a song-and-dance that we put into practice annually, and it's always accompanied by three simple words, “I miss football.” The offseason is a ritual unlike any other that we partake in as a necessary stretch of time to fill the gaps between respective kickoffs. The funny thing about the offseason though, is that beyond the structures of it things have a way of repeating themselves.

The offseason is built for narratives. It's hot take season out there and the temperature is only climbing. This is the time of year where every NFL team thinks they're in contention, and Team A is only one piece away while Team B is completely rebuilding.

The stories stay the same, the lone line of change being the team logo that they bare. The same can be said of each individual team with its core nucleus of players, as storylines are regurgitated as the tradition rolls on.

These are those storylines, you know the ones I'm talking about. We're seven months away from the 2017 Dallas Cowboys season officially starting, and between now and then we're going to hear all of these ad nauseam. You can see them coming from a mile – or an offseason – away.

“Jaylon Smith Is Feeling Better Than He Did Pre-Injury” 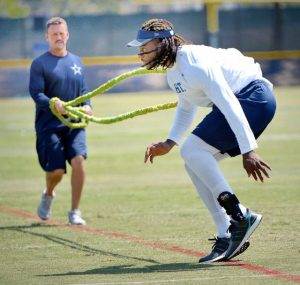 Despite the NFL Draft not taking place until late April, the Dallas Cowboys already have one of this season's most talented “rookies” on their roster – 2016's 34th Overall Pick, Jaylon Smith.

Cowboys Owner/President/General Manager – and recent Pro Football Hall of Fame inductee – Jerry Jones has always been one for the theatrics, but when it comes to Jaylon Smith he's always anxious to say something new. At some point this offseason we're going to hear all about how Jaylon has healed (which will be great), and how he's at an even higher level of athleticism than he was when he was hurt during the Fiesta Bowl back in January of 2016. 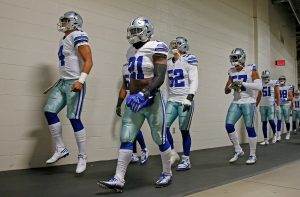 Thanks to the NFL's rotating schedule, 14 of any given team's 16 opponents in a season are known from now until the end of time. This rotating wheel of wonder handed the 2016 Dallas Cowboys the NFC North, AFC North, Tampa Bay Buccaneers, San Francisco 49ers, and of course their NFC East rivals.

2016 was a fourth-place schedule, which is what the Dallas Cowboys were in their division in 2015. This time around they've earned themselves a first-place schedule – you can view the 2017 Dallas Cowboys Opponents right here – that includes the NFC West, AFC West, Atlanta Falcons, Green Bay Packers, and division rivals.

As far as the calendar is concerned we've turned past Valentine's Day and we've already seen some talking heads from the national media succumb to this storyline. More will come. Save the chocolates for those dark days.

“The Cowboys Could Explore The Read Option More In 2017” 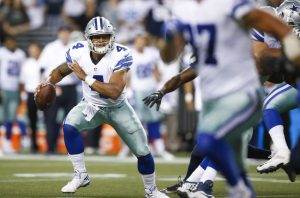 For the first time in a decade the Cowboys are entering the offseason with total and complete plans for a starting quarterback that is not named Tony Romo – Dak Prescott. Young Dakota made a whole lot out of the situation that unfolded before him in 2016, but could Scott Linehan take a page out of Joseph Randle's playbook and go for some more meat off the bone?

Many people have called for the Dak-led Cowboys to utilize the read option more in their offensive play-calling. Prescott certainly has the athleticism to run the option, and his best pal running back Ezekiel Elliott is probably down for anything as long as he's wearing a football uniform.

“Free Agent X Wants To Play With Dak And Zeke” 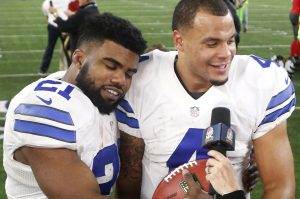 Thursday, March 9th will mark the beginning of Free Agency in the NFL, and it's going to be a day that requires us to set alerts for Adam Schefter's Twitter Timeline. There is no spectacle like football players looking for new places/teams to call home, and if you buy into the narrative then a lot of them could be looking at Dallas.

What narrative is that, exactly? You see, Dak Prescott and Ezekiel Elliott are pretty charming young players in today's NFL. They're the darlings of football, they play for the Dallas Cowboys, and they're two of the best players in the game. It's widely believed that other players – seeing this phenomenon – will gravitate towards them in hopes of calling Dak and Zeke teammates.

We've already seen projected number one overall pick Myles Garrett make a plea to join the Cowboys, and he even mentioned Dak by name. At some point or another, the same will be said about some arbitrary free agent .

“The Cowboys Are Better Off Without (Insert Free Agent That Leaves)” 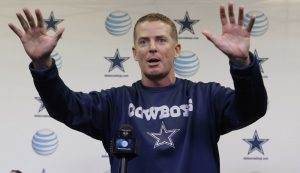 There are a few things true of a majority of football fans, sports fans in general really. We're loyal to our team, we always think we have a shot, and we always try to spin things in a positive direction.

The truth of the Free Agency era in the NFL is that you're going to lose someone you like in it. Someone is going to leave whether it's for more money, a better opportunity, or just because they're leaving. When this happens to the Dallas Cowboys with one of their current free agents this season, members of Cowboys Nation and narratives near and far will all talk about how we're suddenly better off without that player and his services.

Let's remember that, shall we? 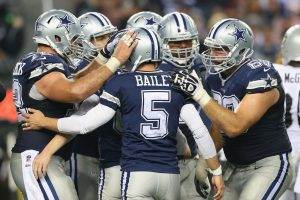 In the aftermath of the Cowboys Divisional Playoff loss to the Green Bay Packers, a shocking detail about Dan Bailey's 2016 season came to light – he played, and kicked, since Week 4 with a herniated disc in his back.

Bailey finished 2016 27 of 32 on field goal attempts, still making him one of the top kickers in the National Football League. If we're being honest though, there was an obvious disconnect in his game and that piece of information solved that puzzle.

With an offseason to rest up and get the body right, it's easy to assume that Dan Bailey will be even more dynamite – Dan-o-mite? – this upcoming season. That assumption will be made near and far, but however far it is Dan could still make a field goal from there.

“Jason Witten Is Focused On 2017 And Nothing More” 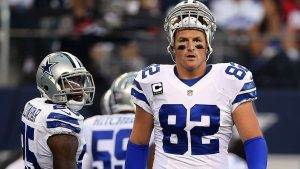 Earlier this week Jason Witten won an Ocho on a special Valentine's Edition of OchoLive. While I would understand if it was, I doubt that is going to be the peak of his offseason activities over the next few months.

No, perhaps Jason and the family will take a vacation and have a new experience. Whatever the case we know that “Gold Jacket Witt” is nearing the end of his playing time in the NFL, but he will definitely be back in action this upcoming season.

It really is insane that the clock is ticking so loudly on Jason Witten's career already, but he has remained focused that he is playing this season and unsure of anything beyond that. This idea will circle back quite a few times until September football begins. Witten will take the route of another Jason and handle things day by day.

“Charles Tapper Looks Like A Star Pass Rusher In Workouts” 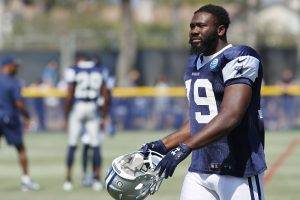 Dak Prescott, Ezekiel Elliott, Maliek Collins, Anthony Brown, and the prospect of Jaylon Smith should be enough for folks to be happy with a draft class, but nope not Cowboys Nation. The people demand more and the people demand Charles Tapper!

Amazingly the Cowboys drafted two players in the first 101 picks of the 2016 NFL Draft on the defensive side of the ball that didn't see a lick of regular season action – Jaylon Smith and Charles Tapper. We know all about Jaylon Smith's progress thanks to all his Twitter videos, but what of Defensive End Charles Tapper?

The Cowboys need some serious rushmen if they're going to make it any further than the Divisional Round of the Playoffs and a man charged with some of that responsibility is indeed Tapper. At some point or another he's going to have a great workout and it'll send us all into a tizzy. Just steer into the ice, folks. 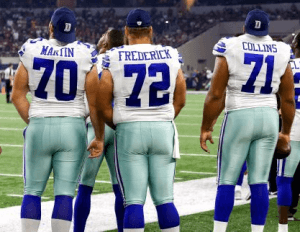 Somebody who missed a majority of the 2016 Dallas Cowboys party was La'el Collins. The third-year Guard from LSU has had a really interesting career so far in the NFL, beginning with the unpredictable circumstances that affected his draft stock.

When La'el originally signed with the Cowboys three years ago he made it known that Dallas was assembling one of the greatest offensive lines this game has ever seen. His rookie campaign saw the type of player that would back that statement up across the course of his career, but an injury early in 2016 gave Ron Leary the chance to shine in La'el's spot.

Leary will very likely be on a new team in a month, leaving the Cowboys to “settle” for a healthy La'el Collins. He is essentially a first-round player on an offensive line that features three of them and that blocks for another in their running back. The possibilities make one foam at the mouth which is why it'll be all over the headlines.

“We're In A New Era Of Dallas Cowboys Football” 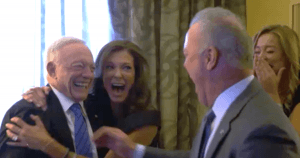 There's a ton that has changed regarding America's Team over the last 365 days or so. A new rookie-of-the-year-winning franchise quarterback has arrived, the next great running back is here (and led the league in rushing), there is a Coach-of-the-Year-winning caliber man leading the organization, and Cowboys Owner/President/General Manager Jerry Jones is a Pro Football Hall of Famer.

These aren't your father's Dallas Cowboys, heck they're hardly your Dallas Cowboys. The most renowned organization in professional sports underwent a pretty serious makeover across the life of the 2016 season, and that included some changes with some serious ripple effects.

These will certainly always be the Dallas Cowboys, but they've indeed changed. They're better, smarter, wiser, faster, and carved by a Hall of Fame hand. A new era is upon us, and it's hard not to get lost in it.

RJ Ochoahttp://OchoLive.com
I like long walks on the beach, mystery novels, no just kidding those suck. The Dallas Cowboys were put on this earth for us all to love and appreciate. I do that 24/7/365. I also love chicken parmesan. Let's roll. @RJOchoa if you wanna shout!
Previous article
Report: Tony Romo Expecting Release, Believes He Can Play 2-3 More Seasons
Next article
Cowboys Salary Cap: Free Agency Looms Large Over Safety Position