For all the huge hype that the NFL draft gets these days – with the three-day prime time coverage – it truly comes and goes faster than you can say Johnny Football. Of course, this brings me to my topic.

Let’s set aside a moment to thank Jerry and Stephen Jones, Will McClay and Jason Garrett for resisting the temptation to draft another polarizing quarterback; this one named Johnny Manziel. We already have our QB, as Jones and company have stated countless times.

Still, as the A&M standout was still on the board at the 16th pick, I was terrified that this draft could turn into a nightmare full of Aggies, Romo-haters and Skip Bayless. Instead, the Cowboys did what I had a feeling they would do all along; they drafted an offensive lineman, Zack Martin.

Not gonna lie Cowboys Nation, I gave a huge fist pump when I saw this selection. There are several reasons why you should LOVE this first round draft pick.

Completely solidified our offensive line and avoided a possibly miserable season of Skip Bayless saying Manziel should be the starting quarterback of the Dallas Cowboys. I’m ready to see Martin lineup with Smith and Frederick this next season as a starter. 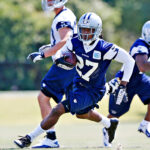 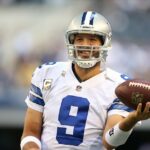