Since the Cowboys are no longer involved and I am tired of being upset I had to find somewhere or someone to take my frustrations out on. I can think of no one better than the Giants. The Giants and their fans make this an easy proposition. What makes it so easy is that this years version of the “New York Football Giants” are strikingly similar to last years version of the Dallas Cowboys. The best part of this though is that Giants fans do not see the similarities or in most cases see them, but since winning last years Super Bowl believe the Giants are immune to it!

The Giants started off the year hot and carried that momentum deep into the season. Both teams won 9 of their first 10 games, and were announced as the team that would represent the NFC in the Super Bowl in October. Dallas and New York both sported 11-1 records through November. THEN DECEMBER CAME! Dallas is hammered by national media for choking in December as they went 2-2 to finish the season at 13-3 and a first round win bye (thanks for that Wade). The Giants however are still the darlings of ESPN even though they have all but crawled through December with a 1-3 record to finish the season at 12-4 and a first round bye. The Cowboys drew the worst possible match up last year when they were awarded with a Home matchup against a division rival in the Giants who by the way had gotten hot and were winners of 4 of their last 6. Now the Giants have drawn the worst possible matchup. At home against a division rival in the Eagles. Who oh by the way have won 5 of their last 6 (one of those wins in N.Y.).

The Cowboys last year came into the divisional game with an inflated head thinking they deserved to be in the Super Bowl, and would roll past the Giants. In the first half that's what looked like what would happen, with the running of Marion Barber. Then in the second half the Giants defense shut down the Cowboy offense and our hopes were shattered. Sound anything like what is happening with the Giants this year? I keep hearing things like “the G-Men don't bend over in big games” and “you don't think Donovan is going to beat the Super Bowl MVP in a big game do you”. Sounds very similar to things coming out of Dallas last year.

The NFL playoffs have more to do with who is hot than how good your team is! Just ask the Patriots! Does anyone actually believe that the best team won the Super Bowl last year? The Giants were and are a good team, but they were not even on the same page as last years Patriots team. They were however on a hot streak like no other! The Giants will only go as far as their O-line and that 3 headed monster takes them. The Eagles are on Fire right now, everything is clicking, especially their defense! The best part of the Eagles defense is their run defense, look what they did to the best back in the league (Adrian Peterson) in the second half last week. This game should be a dandy, and don't be surprised if Elisha is the one crying this year instead of T.O.

All of this may be shear coincidence, but if I were a Giants fan I believe I would not be so quick to dismiss the Eagles. Although from a personal stand point I would love nothing more than for the Eagles to give Giants fans a large dose of reality. When I was younger I had more hatred towards Eagles fans but the older I get the more that pendulum sways towards Giants fans. So to all you Giants fans keep running your mouth, its fun I know, it will make for a great laugh on my behalf when the Eagles make you regret doing so.

It’s nice to see the eagles have support to take out the reigning superbowl champs.
Go Eagles!

Never thought I would ever say this but….. GO EAGLES!!!!!

The 2007 Cowboys were NOT the reigning SB champs when they played the Giants and The 2008 NYG do not have The worst coach in the NFL (Fat boy Phillips). This NYG Team is not in the midst of a 12 playoff drought and are not a Team full of cancers like the Cowgirls are. Most Importantly this NYG team has the reigning SB MVP at the helm not Tony Chokmo. I’m also prettty sure Eli didnt run down to Cabo with a washed up pop singer the week before the biggest game of his life.
I must say I do apreciate you dedicating an enire article to me though, as I seem to be the onlt one reading your articles. Guess all the Cowgirl Fans are buisy crying their eyes out after another blown or should i say Romo’d season

We will find out how “unstopable” your Giants are! I think it is absolutely histarical how defensive you get when someone points out anything bad about your beloved Giants!

Just so you know we have been doing just fine here without your blind ideas about the Cowboys. Since you keep coming back though it must mean that I am doing something right. So thanks for coming, and I enjoy battling with you! Are you having a Bromance with Elisha? I mean I like my QB too but damn you take it to extreme’s.

Well, I for one, am worried shitless about facing the Eagles – I would have much rather faced the Cardinals. But, I do have to say one thing – the 3 losses the Giants had in December – all were played without Brandon Jacobs – so, having him in the game will be a huge boost for the GMen! It will probably come down to the 4th quarter as always with these games – and hopefully the Gmen are left standing in the end. Not to put a curse on us or anything, but the Number 1 Seed has only lost one time to a Number 6 seed – so.. hopefully that trend continues.

That is all I was pointing out that this is not a gimme game, and that the trend we started last year could come to fruition again this year!

Bags- Looks like old Jerruh maybe heeding my advice after all…Pacman cut and Rumors that T.O. may be next..
As far as Eli I just Thank God every Time I watch a Cowgirl game the ELi is our QB and not that choke Artist Blowmo! 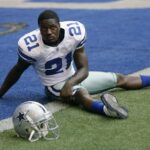