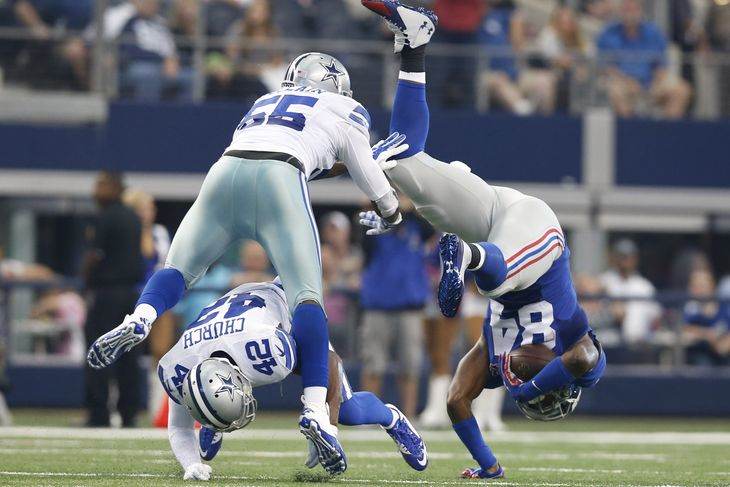 The Cowboys defense went undrafted in my first fantasy mock draft, which took place on NFL.com. However, I think there is some late-round value for this defensive unit.

The Cowboys defense amassed 117 fantasy points on NFL.com last season while taking the football away 31 times – good for second in the league.

The 2015 Cowboys defense should be even more turnover-oriented, which bodes well for big fantasy outputs.

They drafted UCONN defensive back Byron Jones in the first round, who had eight interceptions in his four years as a Huskie.

The front seven as a whole should be much improved, which will help not only Jones but veteran corners Orlando Scandrick and Brandon Carr.

With NFL.com giving two points per interception and one per sack, the Cowboys defense should be able to put up consistent totals week after week.

Outside the NFC East, they will also be facing four teams that ranked in the bottom half of the league in points per game last season.

A fantasy defense is often not a crucial part of the team when it comes to making the difference between wins and losses. For that reason, I much rather have the high-risk high-reward Cowboys defense as opposed to a solid and reliable but often low scoring defense.

If you are planning on targetting a top defense as a priority in this year's draft, I suggest you check if the Cowboys remain on the board.

If they slide down the board, take advantage of the opportunity to build on other positions and possibly land the Cowboys D on the waiver wire.

If you do indeed look elsewhere for defense, consider picking up the Cowboys after week 6. By this time, the Cowboys will be playing with Greg Hardy and Rolando McClain. They will also have already faced the Giants, Eagles, Saints and Patriots.

Tweet @ShoreSportsNJ or reply below with any fantasy questions and comments!