The Dallas Cowboys have unfortunately came out on the wrong end of the spectrum the last two games against the Los Angeles Rams and Green Bay Packers. There has been plenty of blame to go around as to how they allowed both of those games to slip through their fingers, but most everyone would agree it falls on the Cowboys defense.

The Dallas Cowboys defense has already seen their fair share of ups and downs through the first five games of the 2017 season. Injuries, suspensions, and poor play have all contributed to the overall performance, or lack thereof, of the defense. But, are things that much worse than last season or has everyone around Cowboys Nation just raised their expectations?

In order to try and clarify things during the bye week, I decided to take a look at the Cowboys defense so far this season and compare it to what they were able to accomplish in 2016 in order to make the playoffs. The results may or may not surprise you, but you have to continue to read below to find out. 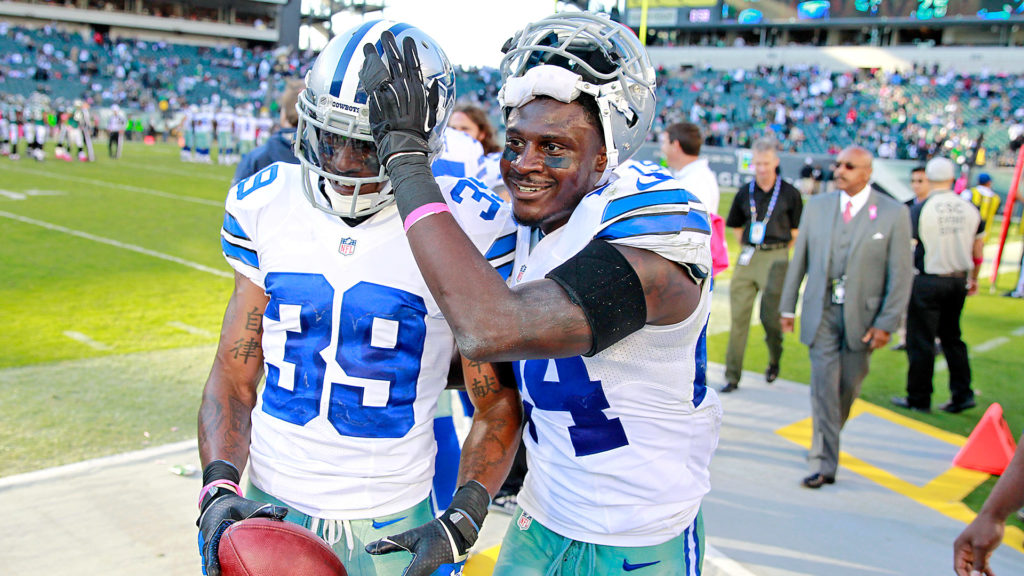 There was certainly nothing special about the Dallas Cowboys defense in 2016, but there is no denying they outperformed any expectations anyone had for them. They ended up finishing the season as a middle of the road defense, but that was good enough to get them into the playoffs.

Probably the best thing the Dallas Cowboys defense did last season was keep their opponents out of the end zone. The Cowboys defense only allowed 19.1 points per game, which ranks right there among the defenses of the teams that won the Super Bowl over the past several seasons. Honestly, that's really impressive, but let's take a look at how they did in some other categories.

In all honesty, even after witnessing how the Dallas Cowboys defense performed in 2016, I'm still surprised they were able to accomplish that with the players they had on the roster. But, even after exceeding expectations, the Cowboys decided not to re-sign any of their free-agents on the defensive side of the ball.

Not bringing back any of their free agents irked some Cowboys fans, but the organization was prepared to overhaul the defense in order to hopefully add more talent and improve. It could be one of the reasons why the Cowboys defense in 2017 is struggling, but let's take a look at how they performed so far through the first five games of the year.

It was honestly no surprise that the Dallas Cowboys defense wanted some new blood and that is why it ended up being the focal point of the 2017 NFL Draft. The only problem with overhauling the defense and replacing them with drafted players, is the amount of youth and inexperience expected to play big roles.

Injuries and suspensions have forced some of the younger rookies to play larger roles than they were initially expected to play, but that hasn't necessarily been a bad thing. Even with all the youth inserted on the defensive side of the ball, they are still only giving up 26.4 points per game. Ideally the Cowboys would prefer that a lot lower, but it's enough to win games if your offense is capable of putting up 30+ points a game. But, let's take a look at some other statistics and then compare them to 2016.

The biggest difference in the Cowboys defense in 2016 and this season to me is obviously how they've performed in the running game. The Cowboys were one of the best at defending the run last season and are now allowing nearly 40 more rushing yards per game and almost a yard more per carry. To me, this is the area they need to improve the most and quickly.

Surprisingly enough, the Cowboys secondary hasn't really been as bad as believed. These young guns in the secondary are allowing about 40 less passing yards per game, but they are unfortunately on pace to give up more touchdown passes. Fortunately, I think this is an area where they will continue to improve as the season progresses.

One area where the 2017 Dallas Cowboys defense has much improved is sacking the QB. In 2016, the defense had a total of 36 sacks for the entire season, but this year's team has already accumulated about half of those through the first five games of the year. That in large part can be attributed to how dominant DeMarcus Lawrence has been.

Overall, things might not be quite as bleak as we are led to a belief. Yes, the Dallas Cowboys defense haven't caught their stride in 2017 yet, but with the exception of their run defense, they're pretty much on par with what got them to the playoffs just a year ago. I think we should all just remain patient and let things play themselves out. At least that's the approach I'm taking and I hope you will too.

Do you think the 2017 Cowboys defense will improve?

Hey sh*t for brains… they’re coming off 2 straight games of giving up 35 points (plus the 42 to Denver!) and you ask a dumbass question like this?!?! Please for the love of God go back to working the night shift at 7-11 and give up writing!

Wow Steve, why don’t you tell me how you really feel. I was merely trying to point out that this year’s defense isn’t that far off from last year’s. The same defense that was good enough to get the Cowboys to the playoffs. But, the 2017 defense could end up being better a few changes and the continued progress of some of their young players.

This defense definitely took a step back. D Lawrence and J Lewis have been the only bright points Jeff Heath has been terrible, Jaylon Smith is a liability in passing downs, and they cant get off the field when they need to. The defense has been the issue in Dallas for 10+ years, whats new?? Jerry is worried about players kneeling when the whole time it looks like the defense is kneeling. It sucks to watch Dak blame losses on himself when its the defense bird watching. Without D we’ll be right back on the couch in January

I’m probably a little too optimistic, but I think this year’s defense can be good enough to get the Cowboys to the playoffs. Injuries and suspensions really set them back so far, but they should be almost at full strength coming out of their bye week. It’s going to take a little bit of patience on a lot of our parts, but I think the defense will improve in time. It will once again be a a priority in the draft and that’s really the best way to rebuild things.

I understand the optimism but the coaching staff needs to get their heads out of their asses and make personnel changes. As fans we see it, so why havent they seen it, I like Marinelli as our DC but he needs to realize these personnel issues are killing us the most, Jeff Heath has no business starting next to Byron, Where’s Taco n why so much Tyrone Crawford, he’s a big waste of money, Jaylon shouldnt be in on passing downs. All these things are hurting us but they keep the same guys in Its becoming frustrating

Travis, I understand where you’re coming from. The frustration with this defense has gotten to a lot of us. Unfortunately, I don’t know if we will see a lot of personal changes. A lot of these players are having to be depended on because of lack of depth or a better option. I do think we will start seeing Jeff Heath phased out, at least on passing downs. Xavier Woods has clearly outplayed him in those situations, but Heath is better against the run. The same can be said for Smith and Crawford. They just don’t have better options right now.