With the 2017 NFL Draft just a couple weeks away now, I thought it would be a good time to take a closer look at some of the Dallas Cowboys draft targets, especially their allotted 30 pre-draft visitors. Former Grambling State wide receiver Chad Williams is one of those  pre-draft visitors and a player the Cowboys could target in the later part of the draft.

The Dallas Cowboys decided to re-sign both Terrance Williams and Brice Butler this off-season, so drafting a wide receiver isn’t really a top priority. That doesn’t necessarily mean they won’t pull the trigger on one if there is a prospect there they like though.

Chad Williams was one of the few offensive players the Cowboys have privately worked out and someone they could decide to draft if the opportunity presents itself. Let’s take a closer look at his strengths and weaknesses in order to get a better understanding of exactly how he might fit in with the Cowboys.

Chad Williams did what he was supposed to do in his four years at Grambling State as a wide receiver and completely dominated against lesser competition. He was often times the best player on the field and in 35 career starts he accumulated 210 receptions for 3,062 receiving yards and 28 touchdowns.

Williams isn’t the biggest WR at just a little over 6 feet tall, but he already possesses a strong/physical NFL ready frame. He actually plays much bigger than his size would suggest on film and this is in large part due to his leaping ability and strong hands to go up and catch the ball at the highest point. He is also physical after the catch and is difficult to bring down.

He tracks the ball really well down the field and makes over the shoulder catches look easy. He has good body control and knows how to use his leverage to his advantage at the catch point. He is also a willing blocker in the run game and has a strength to not only secure his blocking assignment, but make the defender look as if they are on skates. 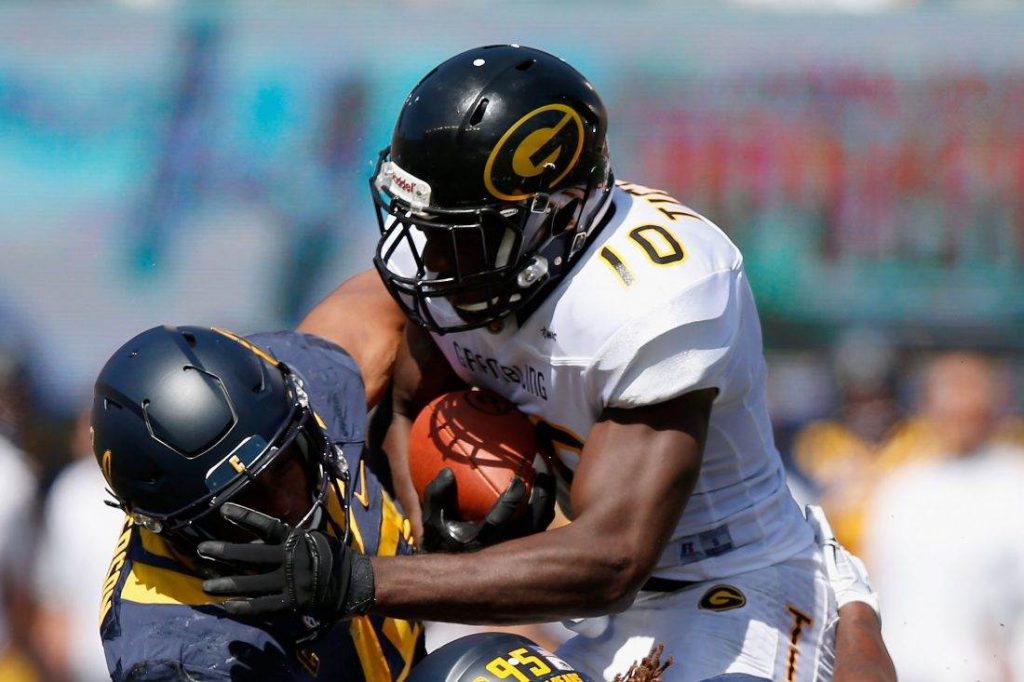 As things stand right now, Chad Williams is an unpolished route runner and will find it difficult to create the kind of separation he did in college in the NFL. He will also have to learn how to beat press coverage, because the level of competition he faced at Grambling State is nothing compared to what he will see in the NFL.

Surprisingly enough, you see him get pushed around too much in his routes, which is somewhat confusing because of his strength and the physical nature he plays the game. His route running will definitely need to improve and he will need time to grasp the mental side of recognizing coverages he will see in the NFL.

On film his 4.4 playing speed doesn’t show up like you would expect, but that could be due to the fact things came easily to him against lesser competition. He’s not very elusive after the catch and sometimes depends too much on his physicality.

Williams also has a few red flags that will need to be answered. He was arrested for having a firearm and marijuana possession in the past, which led to a one-game suspension for the season opener in 2016.

Chad Williams was a heavily targeted and protective wide receiver in his four years at Grambling State. He has the skill set to develop into a starting WR, but at this point in his career is probably a developmental prospect.

If the Dallas Cowboys draft Williams, he will likely be competing with Andy Jones and Lucky Whitehead for the last receiver spot on the depth chart. To even make the Cowboys roster he will have to have a strong training camp and prove that he is capable of playing special teams, something he didn’t do much of in college.

I personally think Chad Williams will be a Day 3 selection and I have a late 5th-early 6th round grade on him. If Williams last all the way to the sixth round when the Dallas Cowboys are on the clock, we could see him wearing a star in 2017.

Do you think WR Chad Williams would be a good Dallas Cowboys draft target?