The 2017 NFL Draft is drawing closer by the day and we are now just a little over two weeks away from the much-anticipated event. Since things are starting to heat up, I thought it would be good time to share with all of you some of the Dallas Cowboys draft targets, especially the prospects that were among their 30 allotted pre-draft visits. Today, we will take a look at Louisiana Tech safety Xavier Woods.

The safety position for the Cowboys is a little thin after the departures of Barry Church and J.J. Wilcox, so you will likely see the organization address the position at some point during the draft. Xavier Woods could be a really good addition and a Cowboys draft target in the middle rounds.

Let’s take a look at the former Louisiana Tech Bulldog Xavier Woods to determine his strengths and weaknesses as a safety.

Xavier Woods was a productive and reliable defensive back throughout his collegiate career at Louisiana Tech. He lined up everywhere in the secondary from the slot to the single high safety and started 51 games in his four-year career. He accumulated 14 interceptions, 32 passes defensed, and four quarterback sacks.

Woods has a solidly built frame and adequate arm length for the safety position. On film he shows really good play recognition and anticipation to undercut routes. This has a lot to do with his intelligence both on and off the field. He is a multiple CUSA All-American honors recipient and puts in the time to study game film. He is a true “student of the game”.

He has reliable hand eye coordination and plus ball skills to come away with interceptions. He is a willing tackler in the running game and has a saviness about him as a blitzer. He is also a standout special teams player, which is likely where he will earn his bones to start with in the NFL. 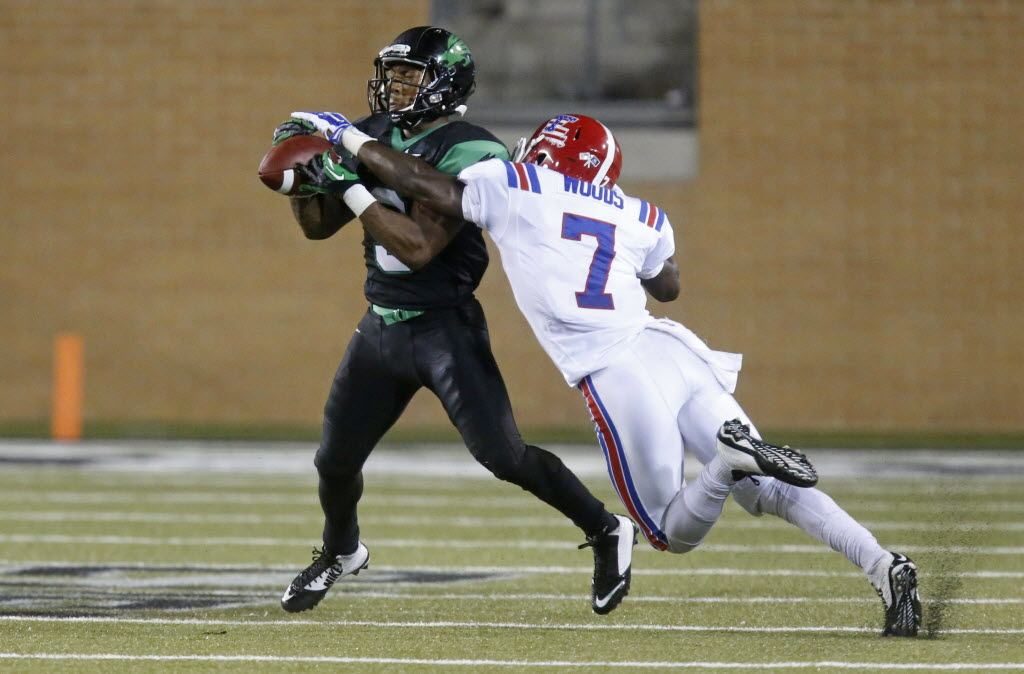 Despite Xavier Woods’ impressive collegiate production, he possesses just average range as a single high safety and lacks the recovery speed to close the gap when there is separation. He doesn’t have the ideal height for an NFL safety and can be posted up by receivers both downfield and in the red zone.

On film, he is sometimes late to read his keys in the running game, which will cause him to be caught out of position at times. He also tends to get caught with his eyes in the backfield. These two issues can cause him to diagnose plays late and create pursuit issues.

He is a little high in his backpedal and he has a stiffness to his hips. He needs to become a more balanced player as both a tackler in the running game and in coverage. He is a willing downhill tackler, but needs to clean up his technique. He can also be bullied around the line of scrimmage and struggle to get off blocks.

Xavier Woods has proven in his four-year career at Louisiana Tech that he is a reliable and dependable starter. He possesses natural instincts for the safety position, but also knows how to prepare like a veteran by watching game film.

Woods isn’t the twitched up athlete like Byron Jones, but could come in as a rookie and challenge Jeff Heath for the open spot at the safety position. Woods’ addition to the Cowboys secondary could allow the defense to play more Cover 3 and give them two interchangeable safeties.

Overall, Woods has a few holes in his game, but I believe he is a Day 2 draft pick. I personally have a late 3rd-early 4th round grade on him. For the Dallas Cowboys, he could challenge Jeff Heath for the starting safety position opposite Byron Jones, but also be a core special teams player.

Do you think Xavier Woods is a good Dallas Cowboys draft target?