The 2017 NFL Draft is so close we can now use our fingers to count down the start date and have leftovers. The most important event in the NFL is now just nine days away, which is why I have started to identify and analyze some of the Dallas Cowboys draft targets, such as JuJu Smith-Schuster. We will take a closer look at his strengths and weaknesses as a player and his possible fit with the Cowboys.

The Dallas Cowboys may have re-signed both Terrance Williams and Brice Butler to enter the NFL Draft without any glaring needs at the position, but that doesn't mean they are done upgrading. I wouldn't be surprised if they drafted a WR at some point and Smith-Schuster could be the prospect the Cowboys draft based on the fact he was one of Dallas' 30 pre-draft visitors.

Below I have analyzed JuJu Smith-Schuster's strengths and weaknesses as a WR and what the Dallas Cowboys would be getting if they used one of their coveted draft picks to make him a member of the organization. 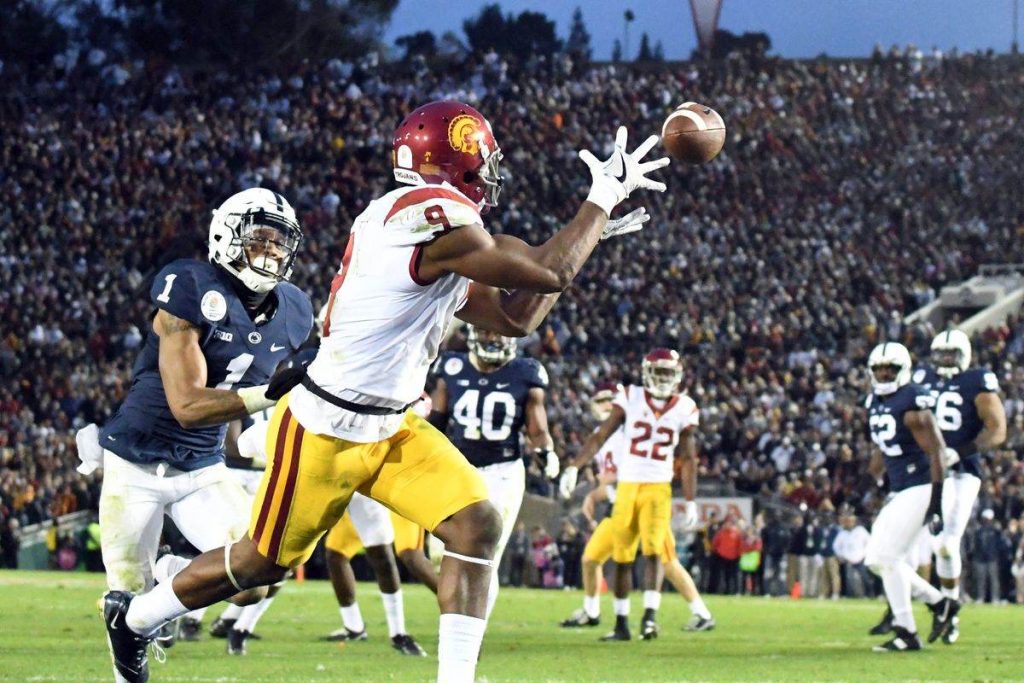 JuJu Smith-Schuster is a tall/physical wide receiver and already possesses an NFL ready frame. He has a thick trunk and a well-developed physique that is built to stand up to the punishment he will endure in the NFL.

Smith-Schuster has a wide catching radius and strong natural hands to make the difficult catches look easy. He tracks the ball well down the field and catches the ball away from his body. He also knows how to use his physical frame to get leverage against cornerbacks and shield them to make contested catches. He is a quarterback friendly WR because he understands how to find open space and sit down in zone coverage.

He prefers to be the aggressor after the catch and has a devastating stiff arm that will frustrate defensive backs in the NFL. He is a strong/physical blocker in the run game and takes pride in doing the dirty work. He has also shown a willingness to play through injuries and still find ways to be productive. In October 2015, he broke his right hand and would eventually require surgery, but didn't miss any time. 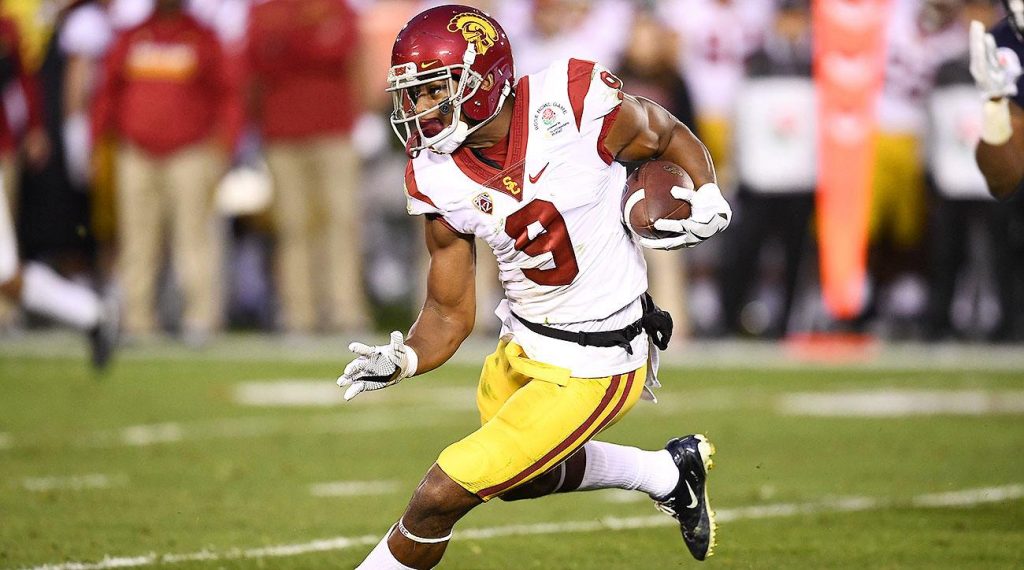 JuJu Smitth-Schuster is an unpolished route runner and will struggle to create separation because he only possesses average deep speed at best. He is going to struggle with press man coverage until he learns how to utilize his athleticism and quickness to keep from getting jammed at the line of scrimmage.

Smith-Schuster has a tendency to labor at the top of his patterns and doesn't quite have that extra gear to be a deep threat in the NFL. Needs to work on his footwork in and out of his breaks and learn how to use his frame better to lean on defensive backs to create more separation.

Despite his willingness to block in the running game, he is too inconsistent and needs to improve his technique. He is not very elusive after the catch and prefers to deliver the blow instead of trying to make the defender miss. He also has some frustrating drops on film and needs to work on his focus a little bit.

JuJu Smith-Schuster won't turn 21 until November and shows his immaturity at times on the field, which can sometimes get him in trouble. He has a passionate approach to the game much like Dez Bryant and will need to learn how to keep his emotions in check.

JuJu Smith-Schuster is a three-year starter at USC and accumulated 213 receptions for 3,092 yards and 25 touchdowns in college. He has the size and skill set to become a #1 WR in the NFL, but might be better as a position receiver due to his lack of top-end speed.

He passes the eye test and is just starting to scratch the surface of his potential. At just 20 years old, he is the youngest prospect in the entire 2017 draft class and has a long career ahead of himself.

He personally reminds me a lot of last year's first-round draft pick Laquon Treadwell, but will likely be a Day 2 selection. I personally have a third-round grade on him, but could see a team drafting him earlier due to his potential.

The Dallas Cowboys probably won't consider drafting a WR any earlier than the third round, which is right where I have Smith-Schuster. He could challenge Terrance Williams for the #2 WR spot opposite Dez Bryant as a rookie and potentially make Brice Butler expendable.

Do you think WR JuJu Smith-Schuster is a good Dallas Cowboys draft target?

Definitely an upgrade over Williams,Butler, and Whitehead but they probably don’t get a WR in the draft If they do It might not be until later by time then Ju Ju will be gone

Travis, I agree with you. I think the earliest the Cowboys consider drafting a WR is probably in the third round. The fact that they made Smith-Schuster one of their 30 pre-draft visitors is interesting though.

Hate to make comparisons, but the guys sounds a lot like Dez coming out of school. Maybe Dez caught the ball more consistently, but his route running was lacking.

I’m intrigued in the second or third.

John, I like that comparison. The only difference I see is that Dez Bryant was more elusive with the ball in his hands then Smith-Schuster. You may forgotten, but Bryant was one of the best return men coming out of college. But, they do have a similar skill set and approach to the game. I’m hoping he’s still there the third for the Cowboys. I don’t think they would draft a WR any earlier than that.

His age is super intriguing to me. Not even 21 yet and has a ton of physical tools already.