Ezekiel Elliott’s future with the Dallas Cowboys organization has become a widely debated subject. Everyone knows how good of a running back he is. Not only is he one of the best in the game right now, he has the potential to end up in the Hall of Fame. He’s obviously not even close yet, but once he hangs up his cleats, who knows who will we call the greatest running back in Cowboys history?

Although the debate is about signing or not signing Zeke to a long-term extension, it doesn’t revolve around how great of a player he is. That much should be clear. All the analysts and fans that think the team shouldn’t pay him big time money don’t believe so because they think Elliott is bad or not good enough. Of course not.

The discussion is rather about the value of running backs in the NFL. A completely valid argument, given the proven history of how running backs’ careers can be shorter than the rest, thanks to the continuous workload they receive. Even more when it’s about guys like Elliott who get tons of touches year in and year out. 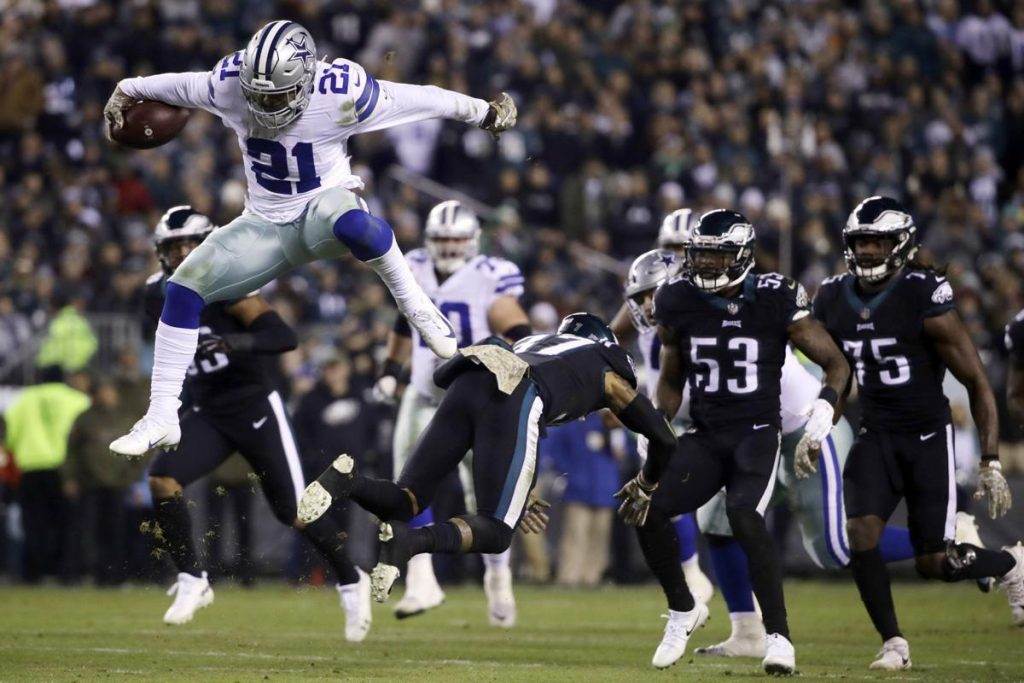 There are good and bad arguments on both sides, but one that’s tossed around very often by the “Pay Zeke” team is how the the team fared during his absence in 2017. As you might remember, Ezekiel Elliott was suspended six games that season. In that stretch, the Cowboys went 3-3, turned the ball over ten times and struggled badly.

Dak Prescott threw five touchdowns and seven interceptions, averaged only 191 yards per game and was sacked 17 times. He also fumbled the ball three times. That was tough, remember?

For many, this is enough to say the Cowboys can’t be successful without Ezekiel Elliott. However, this argument is, at best, incomplete.

First of all, we cannot pretend like the Cowboys didn’t have another important member of the offense missing. Tyron Smith missed a couple of games during that stretch, including the infamous game versus the Atlanta Falcons in which Prescott was brought down eight times. With Smith, the Cowboys went 3-1 during Elliott’s time away. Zeke wasn’t the only absence.

But that’s not even the most important thing. At the time, the Cowboys had no starting-caliber talent at the position other than Zeke.

I asked @Melvingordon25 his message to those who devalue #NFL RBs, and fail to separate good ones from elite ones when it’s time for contract talks: “You see what happened when @EzekielElliott was out.” #Chargers #Cowboys

So even though Melvin Gordon (who’s looking for a big time deal with the L.A. Chargers and speaking up for running backs’ value) and many others have commented on how the Cowboys did when Zeke was out, that doesn’t tell the story of how life without Elliott would really be.

At the time, Alfred Morris, Rod Smith and Darren McFadden were the team’s backup running backs. A solid group of backups? Maybe, maybe not. But none of them were starting caliber. If the Cowboys were to let Zeke walk in the future, they would obviously fill the position with either another three-down RB or get a couple of solid players to work with a RB committee.

They would work with better players than they did when Elliott was away in 2017.

The real question is how would the offense fare with a non-elite running back, but a good or two starting ones? In 2017, they didn’t have that when Zeke was out.

The Cowboys wouldn’t settle to work with Zeke’s current backups. They’d find someone else. They wouldn’t “find another Ezekiel Elliott” because that would be very hard to do, but college football produces tons of quality running backs every year. The front office could find one by the time Zeke’s contract expired if they wished to do so.

Look at the amount of NFL teams that have success without elite running backs. There are plenty. I’m a huge Ezekiel Elliott fan, and I’d love for him to stay in the long term, but there’s no way I believe the Cowboys would do so bad if he doesn’t.

There are many arguments to pay Ezekiel Elliott, but how the team did without him in 2017  isn’t the correct one.

Tell me what you think about “2017 Cowboys: The Wrong Argument to Pay Zeke Elliott” in the comments below, or tweet me @MauNFL and let’s talk football! If you like football and are looking for a Dallas Cowboys show in Spanish, don’t miss my weekly Facebook Live! show, Primero Cowboys!