With the preseason unexpectedly coming to a close due to Hurricane Harvey's destruction, the evaluation process of the young Dallas Cowboys defensive ends has also wrapped up.

Well for now, at least.

After the Hall of Fame game, I broke down how I felt about the three defensive ends fighting for rotational reps; first round rookie Taco Charlton, Charles Tapper, and Damontre Moore. At the time, Moore and Tapper had outplayed Charlton, and had many worrying about the 28th overall pick.

Now that Charlton, and the rest of the defensive ends, have four (or three in Tapper's case) preseason games under their belt, we have a bit more of a representative sample size to compare across players. So, without further adieu, let's do what sports bloggers do best. Rank them.

Charles Tapper is assumed to have the highest ceiling of these three ends, due to his athletic profile. He looks the part in many ways, and flashed during the Hall of Fame game in ways which Taco certainly didn't.

The rest of the preseason didn't go as well for Tapper, however. Just about disappearing over the last three games and missing the finale against Oakland, Tapper has taken a back seat to both Taco and Moore in terms of reps and production during those reps.

This isn't to say that Tapper is done, or will never become an effective pass rusher, but he clearly has a ways to go before he can be relied on over a consistent basis.

Charles Tapper clearly has the traits, but he needs to translate those traits into consistent play on the football field.

Coming in second place of these defensive ends is first round pick Taco Charlton. I've been hard on the selection of Taco the last few months, and my feelings on the other edge rushers on the board at the time have been well documented.

Of course, I am rooting for Taco Charlton to get it right, and be the best rusher of his entire class.

Charlton came away with two sacks during the preseason, beating Raiders left tackle David Sharpe for that second sack on the play above.

My favorite rush of his came against the Colts, however, as he beat a starting caliber left tackle on back to back snaps. Damontre Moore got the sack on the play, but Charlton certainly disrupted the quarterback's timing.

Charlton looked better with each week, and proved why we should be cautiously optimistic about his upcoming rookie season.

The best defensive end of these three this preseason to me has been Damontre Moore. Flashing multiple times each game Moore disrupted the passer on many occasions and came away with a strip sack against the Raiders last week.

The only problem with Moore, however, is that he won't be available for the first two games of the regular season. When the Cowboys first signed him, a suspension was expected. But Moore was never expected to serve as a serious contender for reps on the defensive line. Now that he has emerged as a forceful pass rusher, his suspension will hurt more than anyone had originally expected.

Still, he will only miss two games. Once coming back for week three, I expect Moore to compete for RDE reps, and possibly move down the 3 technique on pass rushing downs.

All three of these defensive ends flashed their top-end ability at time this preseason, and gave fans a reason to be excited. They are not perfect players or rushers, and there will be some growing pains. Hopefully the good will outweigh the bad over the next 16 games. 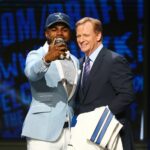 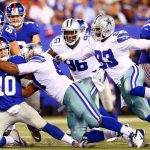