Have you cast your vote yet for the 2017 Pro Bowl? Anyone? Hello…Is anyone out there?

Well, it's not too late. You might not have even known that the voting had started. I myself just voted recently and as you can imagine I went a little bit heavy on the players I am most familiar with, the Dallas Cowboys.

Now, I didn't vote for these players just because they play for my favorite team. I voted for them because they deserve the right to be named to the 2017 Pro Bowl.

The Dallas Cowboys are no strangers to sending several players to the Pro Bowl each year and I think we will see plenty of them in 2017. Of course, only if they're not playing in the Super Bowl.

In all honesty though, I think a lot of the players that get voted into the Pro Bowl make it on name alone. It's kind of like a popularity contest. The players with the well-known names receive more votes because they have a larger fan base. Fair or unfair, that's the way it works.

The 2017 Pro Bowl is being held in Orlando, Florida this year after being played the past several years in Hawaii. I personally like the idea of of a new location, but that's just me.

Below are the Dallas Cowboys players that are the closest to being locks for the Pro Bowl.

It should really come to no surprise that Tyron Smith, Zack Martin, and Travis Frederick  should once again be among the Dallas Cowboys to make a trip to Orlando for the 2017 Pro Bowl.

They are the reason that the Cowboys have such a dominant offensive line and all three of them are arguably the best players at their given positions.

Another no-brainer would be seeing Ezekiel Elliott and Dak Prescott make their first Pro Bowl appearance. These two rookies have come in and helped lead the Cowboys offense to a 10 game winning streak, while also becoming some of the best players at their position.

Both Sean Lee and Dan Bailey to me should both be locks, but there is still some uncertainty there.

Sean Lee is listed as an outside linebacker on the Pro Bowl ballot, not an inside linebacker. So, he is competing with the likes of Von Miller and other pass rushers of his kind. It's a little difficult to believe he will receive more votes, but he definitely deserves them based on the way he has been playing this season.

Dan Bailey on the other hand is one of the best kickers in the league, if not the best. Justin Tucker might be the only one that comes close to being better. I personally think Bailey should be a lock, but again it all depends on the voting.

L.P. LaDouceur is someone you might not have ever heard of. He is the long snapper for the Dallas Cowboys and is an afterthought because he is so consistent. I personally think he is the best at what he does in the entire NFL.

Who is on the fringe?

Not all players get recognized for the work they have done during the season and are left on the outside looking in when it comes to who makes the Pro Bowl or not.

I think the Dallas Cowboys have several players that fit into this category this year.

Jason what is no stranger to playing in the Pro Bowl, but unfortunately I see him on the outside looking in this year.

We have seen the game change and the receiving type tight end has gained in popularity. He could realistically still get voted in, but the odds are against him with players like Jordan Reed and Jimmy Graham likely to receive more votes.

Injuries and a slow start have hurt Dez Bryant's chances to get voted in, but he is performing like one of the better receivers in the NFL once again. He could become an injury replacement, but I think we all hope he is playing in the Super Bowl instead.

Cole Beasley has been simply remarkable this season and is putting up numbers like a #1 receiver. It's unlikely that he will receive the votes to get in, but that doesn't mean he doesn't deserve them.

Ronald Leary wasn't a starter when the season kicked off, but is playing at a Pro Bowl level. He is in his last year of his contract with the Dallas Cowboys and an appearance in the Pro Bowl will definitely earn him a hefty contract in the off-season.

You may have noticed that there aren't very many defensive players for the Cowboys outside of linebacker Sean Lee, but the one person playing at or near a Pro Bowl level is safety Byron Jones.

This is Jones' first year as a full-time free safety and he is one of the reasons why the  Cowboys defense has performed better than anyone would have ever expected.

Jones isn't a well-known name in the NFL just yet and even Dallas Cowboys fans might not really know the impact he has had on the defense, but given time they will.

Jeff Heath has been a good reserve a safety for the Dallas Cowboys, but he could possibly make the Pro Bowl as a special teams player. It's an area of his game where he excels and one of the reasons why the organization signed him to a long-term contract.

Who are your Dallas Cowboys Pro Bowl players?

Please feel free to use the comment section below to share with us who you think makes the Pro Bowl for the Dallas Cowboys.

Cant wait for the pro bowl this year in Orlando, Fl 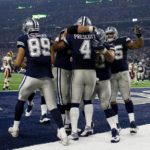 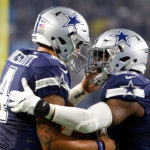