Opening the season 1-0 feels good. This week, the Dallas Cowboys will go against another 1-0 team, the Denver Broncos. As they get ready for their first road game, a lot of questions are rising among Cowboys fans.

Today on Inside The Star, I get into five questions I have in mind for tomorrow’s game. Make sure to comment below any questions that you have. Let’s talk Cowboys.

Will The Cowboys Give McFadden a Chance? 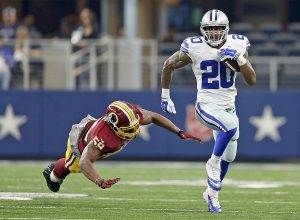 Last Sunday, when the Dallas Cowboys announced who their inactive players were, I was very surprised to see RB Darren McFadden’s name. We’ve been discussing who should be RB2 behind Ezekiel Elliott since training camp, and personally, I really thought McFadden was the guy.

But the Cowboys decided to roll with Alfred Morris. Morris had four carries for… one yard. Not ideal, specially not ideal when your starting RB could actually be suspended at some point during the season. Even if it’s not the most likely outcome, the possibility is there.

I’d like the Cowboys to give both McFadden and Rod Smith the chance to prove their worth this Sunday. I think McFadden is more versatile, and Smith could be a quality backup RB for a lot of years behind Zeke.

Jourdan Lewis may have been drafted in the third round of the 2017 NFL Draft, but the truth is he was a second round talent. Personally, I think he dropped to the third only because he was involved in a domestic violence incident.

After dealing with a DV trial and a hamstring injury during the offseason, Lewis has yet to see the field in a Cowboys uniform. He has been practicing all week as a full participant, and it’s more than likely we see him this Sunday.

The question is, will we actually see him play on defense? And if so, how many snaps?

Jerry Jones tells The Fan he hopes that where the #Cowboys see Jourdan Lewis Sunday is on defense, not just special teams.

With Orlando Scandrick injured, look for Jourdan Lewis to be on the field a lot. I’m ready to see what he’s got.

Will We See More From WR Ryan Switzer?

Speaking of rookies, Ryan Switzer had his NFL debut VS the New York Giants last Sunday. While he was in for eight special teams snaps, Switzer was only in for two when the Cowboys’ offense was on the field.

This is something you expect from a fourth-round rookie who was mainly drafted to contribute as a kick returner. However, I think we could see more of him this Sunday.

Terrance Williams is dealing with an ankle injury he suffered versus the Giants. Fortunately, Williams participated in practice this Friday.

Even though it’s very likely we see him play versus the Broncos, he possibly won’t be 100%. And I can’t help wondering if Scott Linehan tries something with Switzer on the offensive side of things.

Will Dak Prescott Shine Against This Elite Defense? 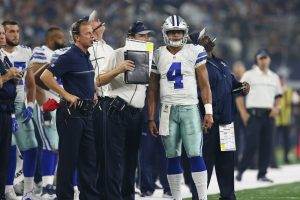 Last week, I predicted the Cowboys to beat the Giants 27-24. I was right on the Cowboys winning the game, but I wasn’t correct in my explanation as to why.

I thought Dak Prescott would come out picking the Giants’ defense apart. I thought he would make some big throws. And while he didn’t put up a great performance, he did enough to get the win.

However, I’m intrigued about how he will come out for this Broncos game. We know he missed some passes last Sunday, including what would’ve been a TD to Dez Bryant on a slant route.

This feels like the perfect opportunity for Dak Prescott to make a statement versus an elite defense.

Will La’el Collins Pass His Biggest Test Yet?

La’el Collins has been another big story since the offseason for the 2017 Dallas Cowboys. Moving from LG to RT, Cowboys Nation has been keeping a very close eye on him. He is promising, and he is expected to be better than Doug Free.

So far, he’s been good. To be honest, I was on the “Keep La’el At LG” team. At some point, I even thought the Cowboys were making a mistake. Fortunately, it seems they were right.

Collins has lived up the hype. He did a decent job against Oakland Raiders EDGE Khalil Mack during the third week of the preseason and he dominated JPP during the season opener.

Now he faces Von Miller. Arguably the best pass rusher in the NFL, Collins will have a very busy Sunday.

We have been talking about La’el Collins potentially being an elite RT for this football team. This Sunday, when he lines up against the Super Bowl 50 MVP, La’el Collins can send that message to the rest of the NFL.

It will be fun to get an answer to all of these questions tomorrow. It is no secret that this is a fun team to watch. The offense is one of the best in the country, and the defense looks very promising. Even still, the important thing is to get that W and continue with the Dallas Cowboys’ Super Bowl run.

Tell me what you think about “5 Questions Heading Into Cowboys VS Broncos Game” in the comments below, or tweet me @MauNFL and let’s talk football! If you like football and are looking for a Dallas Cowboys show in Spanish, don’t miss my weekly Facebook Live! show, Primero Cowboys!