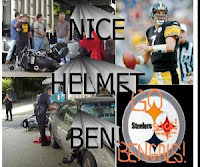 Time for another 5 question game preview! This week we got together with the “Christmas Ape” over at DC Steeler Nation in order to get a Steelers point of view. Below are the questions we posed them and you can check out our answers to their questions here! While your their make sure you give those guys some love.

1. The Steelers have arguably the best defense in the NFL, who is the one player that makes their defense go?

DC Steeler Nation: You could make an argument for either James Harrison or Troy Polamalu for defensive leader. Both have been absolutely dominant all year and should be in consideration for Defensive Player of the Year. Polamalu has been plagued with injuries the last two years and has finally gotten to go a full year without missing time, so he’s resumed being the best safety in the league. Harrison has benefited from the rise of LaMarr Woodley as the opposite end rushing linebacker, but he’s the better of the tandem. Last week he absolutely embarrassed Pro Bowl tackle Matt Light, beating him twice off the end to force two Matt Cassel fumbles on successive drives.

2. Which would Ben Rothlesberger rather have, a good offensive line or a good motorcycle helmet?

DC Steeler Nation: Hey, at least it takes more than a pinkie injury to sideline our quarterback.

DC Steeler Nation: The Steelers would have beaten the Colts except for a few costly turnovers on their own side of the field. The offensive play calling has improved dramatically, as has Roethlisberger’s decision-making, since then and the offensive line, which has been pretty poor most of the season, is actually looking halfway decent.

4. Is it true that Neil O’Donnell will be at practice this week to help prepare Big Ben? The Cowboys understood this to be true so they went out and signed Larry Brown, he will start in place of Anthony Henry!

DC Steeler Nation: Sure, Neil’s been talking to Big Ben, just like Jackie Smith has been coaching up Jason Witten on dropping passes wide open in the end zone.

5. If the Steelers have a weak spot it would be their secondary. How do they match up with Dallas’s receiving corps?

DC Steeler Nation: I think a Cowboys fan calling the Steelers secondary a weak link is a bit like the pot calling the kettle black. The Steelers are the best D in the league against the pass, after all. Still, the Steelers defensive backs have been a bit banged up. One of the starting corners, Bryant McFadden, could finally return for this game after missing five weeks. T.O. and Roy Williams have a big size advantage over whoever will be covering them. It’ll be interesting to see how Dick LeBeau deals with Jason Witten. Might be seeing Polamalu covering him, which should be fun.