The Dallas Cowboys are back folks! After a dominant performance by the Rod Marinelli's defense, the Cowboys walked away with a win versus the New York Giants. For the first time in his NFL career, Dak Prescott enjoyed beating his NFC East rival. Good times, friends… good times.

As we enjoy this victory week and get ready for the next, let me share with you my takeaways from the Dallas Cowboys season opener. We'll be doing this all season after every Cowboys game! Here we go.

The Giants Offense Is Bad

Since going 0-2 versus the Giants in 2016, all of Cowboys Nation was a bit concerned about opening the season versus New York. The fact that they were the only ones able to beat last year's team left us with a small fear of being bested once again in 2017.

I know Odell Beckham didn't play, and it is only fair to admit that him being inactive did nothing but increase the Cowboys' chances of winning.

Even still, I expected more out of Eli Manning's offense. It's supposed to be a deep group of catchers including WRs Sterling Shepard, Brandon Marshall and TE Evan Engram. Brandon Marshall had only one reception in four targets. Our secondary may be decent, but not being able to score more than three points against a defense that is far from elite, says a lot about your offense.

Even with Beckham sitting out for the game, I think this was a very telling performance for the NY Giants who are supposedly the top threat for the Dallas Cowboys. 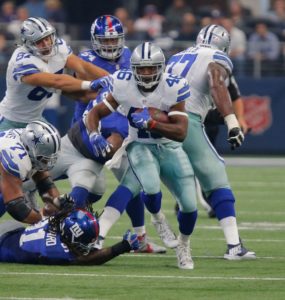 This will be a take I know a lot of people won't agree with, but I truly believe it. When the Cowboys announced their inactive players two hours before showtime, I was very surprised when I saw Darren McFadden's name.

Since the preseason, I've rooting for both McFadden and Rod Smith to be this team's running backs behind Ezekiel Elliott.

I just don't think he's shown us enough to be Ezekiel Elliott's backup running back. I'd rather have a more versatile player in Darren McFadden or a younger player with a higher upside in Rod Smith. 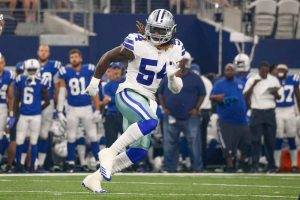 You know it to be true. Since the moment he was drafted we've been waiting for Jaylon Smith to be ready. How many times did we said something similar to: “Man, just wait till we get Jaylon healthy, these LBs will create mayhem.”

Well, Jaylon Smith is playing football, and he is ready. I'm not talking about him running drills in practice or playing in the preseason. No, I'm talking about real NFL regular season football. The only LB that was on the field more than Smith was Sean Lee.

Jaylon was in for 36 snaps, which were more than what we expected. He played excellent football, and with him being ready, the Cowboys may not need to rush Anthony Hitchens back to the field. Jaylon Smith is no longer a future contributor, he is ready to contribute right now.

Dak Prescott Could Do Better 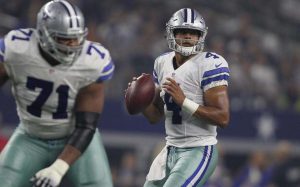 Please, don't get me wrong. I'm not saying by any means that Dak Prescott is not good, or that he is about to be on a sophomore slump. He isn't.

But we would be lying to ourselves if we said Dak had a very good game. His accuracy was off at times, and he missed some pretty good opportunities. Dez Bryant's stats do not tell the whole story, for instance. He had a better game than what the score box says. But sometimes, Dak couldn't connect. He even missed Dez in the end zone.

This isn't a reason to panic. We've seen Dak Prescott have slow starts and then pick it up and be awesome at football. But the truth is, with such a tough schedule, there will be some close games this season… and Dak can't be missing these opportunities.

Every play counts, and slow starts can end up knocking you out of Super Bowl runs, even if you score 18 points in the fourth quarter. Damn you, Packers.

The Cowboys Defense Will Be Alright

Dak Prescott's offense is not a problem. The WR group is unstoppable, the running game continues to be dominant and Dak Prescott is still our quarterback. The question mark for the Dallas Cowboys has always been the defense.

For some years now, this defense has been a “bend-but-don't-break” kind of defense. That could be changing for the Cowboys soon. The Giants OL is not very good, but the Cowboys showed us a promising pass rush.

DeMarcus Lawrence was getting pressure constantly and even sacked Eli twice. Charles Tapper saw some action too, getting his first career sack. David Irving is coming in week 5, and Damontre Moore will be back when the Cowboys face the Cardinals in week 3.

Overall, the Dallas Cowboys had a good game during the first week of the season. This could be our year… I sure hope so. Next week the Cowboys face another elite defense. The Denver Broncos will prove to be a tough opponent, but last time I checked, Dallas is a pretty tough opponent too.

Mauricio Rodriguezhttps://www.facebook.com/PrimeroCowboys/
I love to write, I love football and I love the Dallas Cowboys. I've been rooting for America's team all the way from Mexico ever since I can remember. If you want to talk football, I'm in... You'll find me at @MauNFL.
Previous articlePlays Of The Week: D-Line Dominates And Anthony Brown Seals The Win
Next articleFirst Thoughts: Denver Broncos Versatile On Offense, Imposing Defensively