As a member of Cowboys Nation, I think I can speak for everyone in saying that the 2017 season for the Dallas Cowboys has been a roller coaster ride full of emotions. This year’s team has looked unstoppable in some games and completely pathetic in others. We have also had to ride out this entire Ezekiel Elliott suspension situation. It’s been an interesting season so far to say the least.

Since Thanksgiving is just a few days away, I thought I would put together a list of 5 things I think Dallas Cowboys fans should be thankful for in 2017. I mean, that’s what you do on Thanksgiving… Right!?

We eat too much food, visit with friends and family, and watch the Dallas Cowboys play. I know that’s what my Thanksgiving has always consisted of. You?

As always, please feel free to take advantage of the comment section at the end of the article to share any of your own thoughts and opinions on the topic. But here are my points. 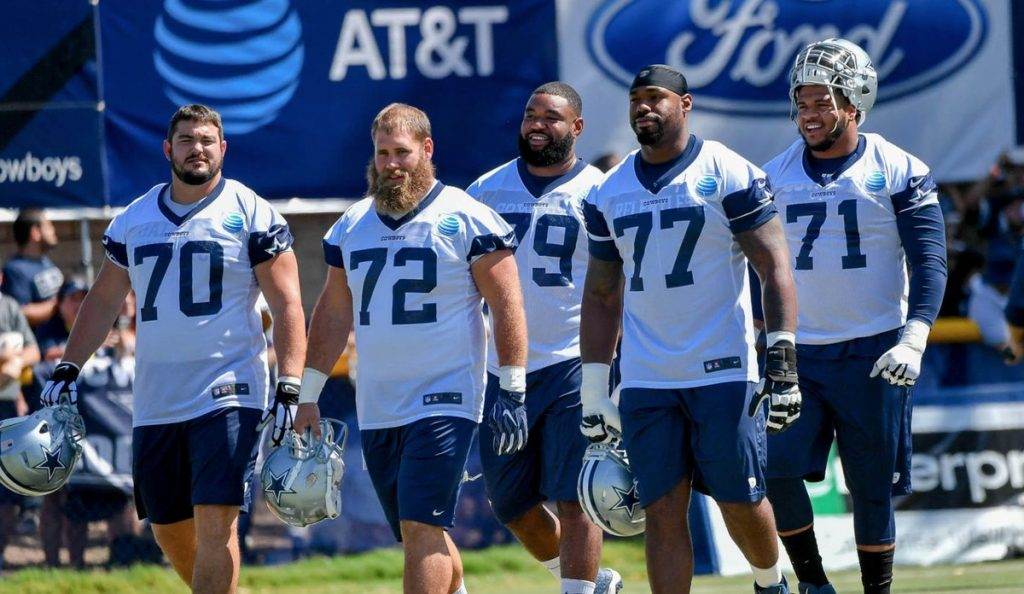 If there is one thing about the Dallas Cowboys we should all be thankful for, it is the offensive line they have built over the past few years. The Cowboys OL is arguably the best unit in the NFL, headlined by their three Pro Bowlers, Tyron Smith, Travis Frederick, and Zack Martin. They are without a doubt the strength/backbone of this team.

Don’t expect this unit to change much over the next several years. Tyron Smith and Travis Frederick are already locked up for the foreseeable future, and Zack Martin will likely receive an extension this off-season. And that’s not even mentioning La’el Collins also received an extension recently. With the continued continuity, they could even get better.

The Cowboys probably need to find an upgrade at the left guard position, but Collins’ position flex could work in their favor come draft time.

They could keep Collins at RT or move him back to LG depending on what they believe is in the best interest of the entire OL. This is great news for the Cowboys offense for years to come. 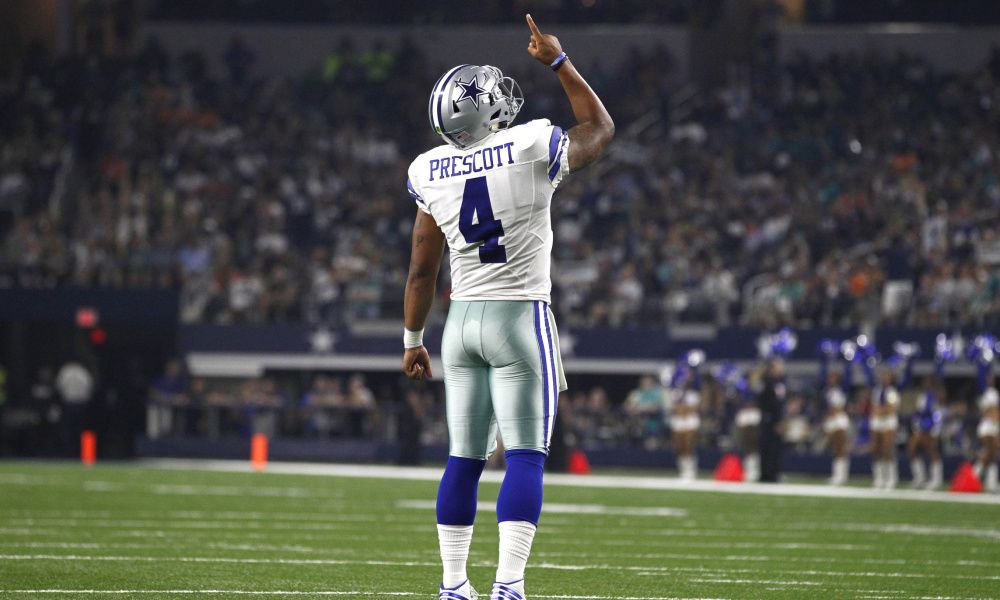 Dak Prescott is another reason the Dallas Cowboys and fans have reason to be thankful about the team on Thanksgiving. The Cowboys were extremely fortunate to find Prescott in the fourth round in 2016, because making the transition from Tony Romo at quarterback could’ve gone a lot worse.

Fortunately, the transition from Romo to Prescott went smoothly and Cowboys Nation couldn’t be happier with their new signal caller.

Prescott isn’t experiencing any kind of sophomore slump in his second year in the NFL, in fact he is putting together yet another Pro Bowl caliber season. There were those doubters out there who believed he wouldn’t be able to replicate the numbers he put up as a rookie, but he’s doing just that this season.

We will learn a lot about the Dallas Cowboys’ young QB while Ezekiel Elliott is out, but I expect him to put the team on his back and keep them competitive. He is one of the few QBs in the league who can hurt you with his arm and his legs, and scary thing is, he will only continue to get better. 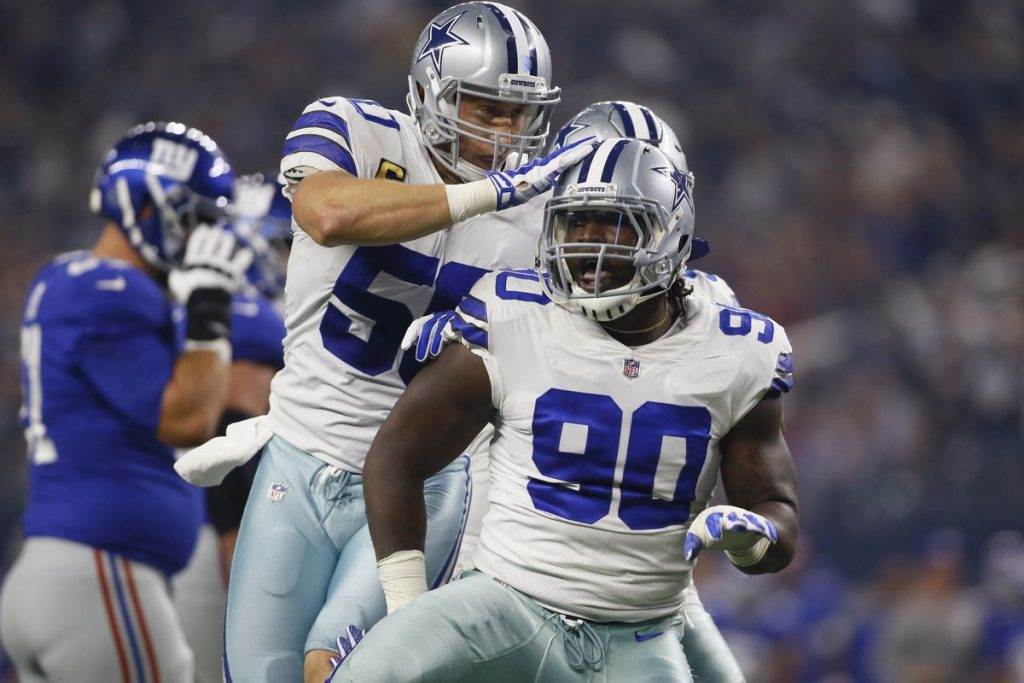 In the off-season, Owner/General Manager Jerry Jones really wanted to find the Dallas Cowboys a “War Daddy” to get after opposing QBs. Unbeknownst to him, that player was already on the roster.

DeMarcus Lawrence has been on a tear this season and has become arguably the best pass rushing defensive end in the NFL.

Now, it is a contract year for Lawrence, but don’t expect the Cowboys to let him get away.

It’s unlikely he receives a long-term contract just yet. They probably want to make sure that this isn’t some kind of fluke performance from him and that his previous back injuries won’t become an issue. That is why it is much more likely he receives the franchise tag.

Regardless of how the Cowboys keep Lawrence around, I think we can all agree that we are extremely thankful Dallas finally has a pass rusher who can dominate a game. Plus, he will only continue to get better as the Cowboys improve the talent around him on the defensive side of the ball.

DeMarcus Lawrence isn’t the only defensive player to kind of come out of nowhere and become a “War Daddy” pass rusher. David Irving has become one of the better defensive tackles in the NFL and is a nightmare for interior lineman across the league. For that, I am extremely thankful.

Irving possesses unique size, speed, and agility for a DT and he uses that to his advantage.

Since returning from his four-game suspension to start the 2017 season, he has been absolutely dominant and continuously makes plays behind the line of scrimmage. He has always shown flashes of this, but has finally become consistent in his play.

Irving won’t go anywhere anytime soon. He is a restricted free agent after the season, but the Cowboys will likely place a first-round tender on him to secure his services. But, they could enter into contract negotiations and lock him up for several years to come.

Heading into the 2017 season no one really knew what to expect from the Dallas Cowboys secondary after pretty much cleaning house in the off-season. The Cowboys ended up drafting not one, but four defensive backs in the 2017 NFL Draft and it looks to have paid off.

The Cowboy secondary struggled early in the season because of injuries and inexperience, but have really rounded into shape here of late.

Jourdan Lewis looks like a starting CB and Xavier Woods might have earned the starting job next to Byron Jones at safety. Unfortunately, we haven’t seen much of Chidobe Awuzie because of a recurring hamstring injury, but his versatility to play several different positions will be a welcomed addition in the secondary.

The Dallas Cowboys look to have not only upgraded the secondary, but they have managed to do it in just one season. All of these young players will continue to get better the more they play and that means the future is bright for the Cowboys defense.

That’s a reason to be thankful. What are you thankful for about the Dallas Cowboys?