The Dallas Cowboys came into the 2016 NFL Draft coming off a disappointing 2015 season. Former Wide Receiver Dez Bryant broke a bone in his foot during the teams week 1 victory over the New York Giants, and never fully recovered from it. Also, Tony Romo suffered multiple collarbone injuries and only appeared in 4 games. The team finished a dismal 4-12 and possessed the number four overall pick once the draft rolled around in April, and new life was restored.

Names like Jalen Ramsey and Joey Bosa were linked to the Cowboys with their first pick in the draft. However, the team went a different route and decided to sure up the running back position, and drafted Ezekiel Elliott out of Ohio State.

He wouldn’t waste any time making his presence known on the NFL level. Leading the league in rushing with 1,631 yards and 15 touchdowns in fifteen games, and powering the Cowboys to the NFC East title and the playoffs. In addition, he was selected to the Pro Bowl and was named a First-Team All-Pro. 2017 was a rocky one for Elliott as he dealt with domestic violence allegations. Unfortunately, he would have to serve a 6 game suspension which the Cowboys never fully recovered from, finishing just short of the playoffs at 9-7. His production was still elite, however, rushing for 983 yards in ten games. In 2018, with all his legal troubles behind him, he would win his second rushing title in three years with 1,434 yards and lead the team to another division crown. Firmly establishing himself once again as the leagues best running back.

Ezekiel Elliott is the Cowboys identity on offense, he’s the engine that makes it all go. His 101.2 yards per game average is second all-time, trailing only Hall of Famer Jim Brown (104.3). He’s a generational talent, and as the year’s pass, he keeps proving he was the right selection on draft day. 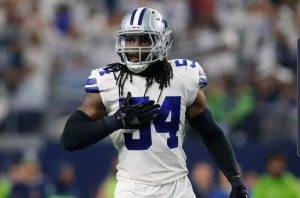 In the second round, the Cowboys took a gamble and selected Linebacker Jaylon Smith out of Notre Dame with the 34th pick. Smith was coming off a gruesome knee injury in the 2016 Fiesta Bowl against Ohio State. He tore both his ACL and MCL and was carted off the field with tears in his eyes, and leaving uncertainty about his NFL future. Just six weeks post surgery he was already squatting 500 pounds. By April, he was doing drills working himself back into peak condition prior to the draft. He would redshirt, to use a college term, his first year in the league and not risk further injury.

Once he saw the field in 2017, he showed flashes of the player he was at Notre Dame, but it was clear he wasn’t quite fully healthy yet. Nonetheless, he was very solid with 81 tackles in his first year of action. But 2018 would see Smith take a leap into the conversation of the leagues elite at the linebacker position. He finished with 121 tackles, 4 sacks, 4 passes defended, 2 forced fumbles and 2 fumble recoveries.

He truly is an amazing comeback story. He’s come from an injury that could’ve derailed over even ended his career, to one of the best linebackers in the NFL. Very inspirational. 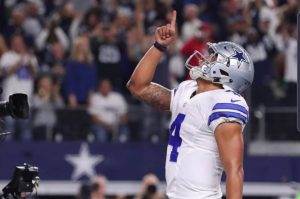 Tony Romo was the team’s franchise quarterback. But without a reliable backup on the roster, the Cowboys needed to make sure they had insurance just in case an unfortunate injury should occur. In the fourth round, they found their guy and selected Dak Prescott out of Mississippi State.

Prescott would start off as the third-string quarterback behind Romo and newly promoted Offensive Coordinator Kellen Moore. However, when injuries put both men ahead of him on the sidelines, he got the keys to the car heading into 2016 season. After a rough debut against the New York Giants, he would run off eleven straight victories and lead the Cowboys to a 13-3 record, the NFC East title and the number one seed in the conference. Also, he would be named Offensive Rookie of the Year for his efforts, not bad for a fourth-round pick.

2017 would see him regress a little, especially without Ezekiel Elliott for six games. His yards and completion percentage both went down, while his interceptions increased by nine. The Cowboys would finish 9-7, missing the playoffs by just a single game.

After falling short of the postseason just a year before, the pressure on Prescott was huge going into 2018, and he wouldn’t disappoint. He set a career high in passing yards with 3,885. He would complete passes at almost a five percent higher rate than the year before and lower his interceptions by five. The Cowboys would finish 10-6 and win the NFC East for the second time in three years.

The only quarterback that’s won more games than Prescott the last three seasons is Tom Brady, probably the greatest ever. His 15 game-winning drives, 13 primetime wins, and 19 rushing touchdowns are all tops in the NFL for quarterbacks since his rookie campaign. Most importantly, he’s started all 48 games since entering the league. It’s clear to see that he has far surpassed the expectations of where he was drafted.

The Cowboys found other value in the 2016 draft as well. In the third round, they drafted Defensive Tackle Maliek Collins out of Nebraska. He’s battled foot and knee injuries in his first three years, but his production when healthy has been very solid with 10.5 sacks. In round six they drafted Cornerback Anthony Brown out of Purdue. Currently, he’s the lead dog at the nickel corner position, forming a nice trio with Chidobe Awuzie and All-Pro Byron Jones. Lastly, also in the sixth round, they drafted Safety Kavon Frazier out of Central Michigan. Although he hasn’t surpassed Jeff Heath as the starter at strong safety, he’s been an extremely productive player on special teams. A great value pick here.

A Hall of Fame talent at running back, a franchise quarterback, and a dominant in middle linebacker were all brought to this organization in 2016. When adding the value of the other three players mentioned previously, a foundation has been laid for this team to be good for years to come. Since their arrival, the Cowboys have been one of the most successful teams in the NFL with multiple division titles and playoff appearances. What makes this even more encouraging is that none of them will be over the age of 26 once the season starts. This draft class is setting up to be a memorable one for the Dallas Cowboys.