Randy Bush writes, “My question to all of you Cowboys fans is this: Do you feel that Mr. Jones VALUES winning enough to find making these fundamental changes worthwhile?”

That’s the end of a comment left on the FireGMJerry.com feature from last week (redacted post), and I felt compelled to take a shot at answering his question while giving other fans a more noticeable chance to do so as well.

My take on Jerry Jones is that through his years before buying the team; he learned to assume that he’s right and to fix it when he’s not. The oil business that he got rich from requires a lot of educated guesses and luck, and that line of work can really teach you a lot about your own judgment skills.

As the Cowboys Owner he’s had 20 years to experience some similar things to what he did in the oil business. They’re both up and down regarding success and they both take time and money.

He seems to approach this team like he probably used to approach an empty field that he suspected had oil under it. You find a place you think is right and you start throwing money and man-power at it until you strike gold.

He got Jimmy and Troy and the rest, and he, like the other famous hillbillies, struck gold. But that well dried up after a while and ever since he’s been trying to find a new one. He still feels his judgment is right on queue, and he’s not that far off most of the time. Maybe just enough to make him a better Owner than a GM.

But a football team isn’t like an oil field. More money doesn’t always equal better production, even if everything else is just right.

Drills and pipes and wrenches don’t have personalities, girlfriends, or egos; they’re just tools. And that’s what Jerry fails to realize; every well-oiled machine needs the right tools.

On the flip side, in that business you learn after a while that when you look for one specific trait in a prospect that you think makes it a good place to drill, and you get enough bad results, you have to take a step back and look at things. You start changing your crew out to find better guys because the old ones didn’t get you that oil, then you try different equipment for the same reason.

But eventually you have to see that the only common thread remaining is you and your obsession with finding that one special trait you always look for.

Well right now Jerry Jones is still going for that one special trait, and it happens to be the very control that he has believed would bring another championship to Dallas. We’re just along for the ride until he does finally realize that he’s the only link on this Cowboys team to the failures of the all of the last 12 years.

I am not sure how committed Jerry is to winning. I think he is committed to winning his way and if he doesnt then he tries to spin it so that it makes it seem as if he wants to win.
I believe he hired Parcells to rebuild the team so the team could be successful enough for him to get his new stadium.

This is the longest post-season drought in team history and the coaching staff appears to be incompetent and the front-office is devoid of an experienced football staff.

Maybe that’s going to be Dan Reeves’ job … to fix some of that.

Bryson, that was an excellent analysis of the situation. I believe what it comes down to is Jerry’s perception of what course he needs to take to make a profit. Tex Schramm and his immediate successors not only built a great football team, they also built a marketing and merchandising powerhouse. That powerhouse brings in money whether the Cowboys win or lose. That fact makes look closely at Bob’s comment above. Does Jerry understand fans will support team endevours with their wallets if they really SEE a TEAM on the field, with no backbiting or BS in the locker room? Or does he dismiss that as a non-profitable course. When he brings in players like T.O. and Adam Jones, he brings in their reputations, regardless of their talent. The discord that’s stirred up by these reputations along with lax discipline keeps the team in the news like a soap opera & sell rags like the Inquirer & Star. It keeps public interest focused on the Cowboys in a very negative way. Such interest equals sales & not necessarily from the loyal fans. They want to see Cowboy football, not “As the Cowboys Turn”. My biggest fear is that Bob is correct & that Jerry thinks that exploiting the Cowboys’ marketing/merchandising successes are a far quicker way, maybe the only way, to turn a profit in the time frame he expects.

Well, let’s say that is the case, what is his ultimate goal? He had money before he bought the team, and the team was well recognized before, too.

My point is, what if his goal was to do what he has done, which is get this new stadium built, to be the most recognized football franchise in history etc. etc.?

What are the chances, based on that theory, that now he backs off more and focuses on getting the team to a higher level of competition again? Maybe it’s because he doesn’t need to interfere as much, or because he is just dumb enough to have been putting one before the other all these years. Either way, so far 2009 has shown us all a different side of Jerry Jones, and that could be the next step.

So many possibilities, and unfortunately, we can’t know for sure what is what unless Jones does what none of us want him to do, which is get back in the media.

Well….so much for Dan Reeves. A very competent & respected man like Reeves, if given authority, mind, could have done wonders for this organization. Sad. 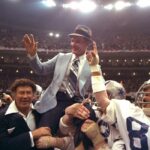