The NFL truly is the best reality show on television. Morris Claiborne was having his best season as a pro, and arguably one of the best seasons among Cowboy defenders. Just when everything's going well for Morris, with him finally looking like he's ready to turn the corner, a familiar foe strikes again, the hamstring.

Going into the season, many would have called me crazy if they heard me say losing Claiborne will hurt this defense tremendously, but if you look at this season he has covered Odell Beckham Jr. and Brandin Cooks, both with extreme success. While also following Julian Edelman around the field, a daunting task, and held his own for the most part.

The coaching staff suddenly has a huge dilemma on its hands determining how they will shift around this secondary to cope with the loss. I see 2 likely solutions.

The first possible solution would be to move Byron Jones to a full-time corner, leaving the corner rotation as Carr, Jones, and Patmon.

The problem with this solution, however, is that Jones has been such an asset this year covering opposing team's tight ends, and Miami has two good ones in Dion Simms and Jordan Cameron. I do not trust either J.J. Wilcox or Barry Church to handle these responsibilities throughout the ball game. As we saw in the final defensive drive in the Buccaneers game, bad coverage by your safeties can lead to penalties, which in the NFL can and will cost you ball games.

Jones has been such a good center field safety since he has taken over J.J. Wilcox as the starter. In my opinion, it would be a mistake to move Jones to corner full-time.

The second solution, and one I feel most comfortable with, not that my comfort level matters, is leaving Jones at safety and having active to fill in for Claiborne.

** Editor's Note: Of course, Corey White was cut yesterday. This post, as one commenter below points out, references Corey White being an option here. The thing to remember is that this post wasn't about White. It's about a hole that needs to be filled while Claiborne is injured. Jones can't play corner and safety the whole game, and Wilcox is a liability. So the point stands. White's name was scratched out above, but someone has to go there. A full rethinking of these ideas can be found at: Current State Of The Cowboys Secondary**

I have been a big fan of ever since the preseason. Simply put, he was a playmaker and I thought he deserved more of a role in the regular season. In the New England game, the only game he had a significant role, I thought he played well. He is a very versatile defensive back with position flex and has shown the ability in the preseason to force turnovers. By activating , it gives the Cowboys a corner rotation of , Patmon, and Carr. Not very scary, but it also allows Bryon Jones to remain at safety and cover the opposition's tight ends.

If I was the coaching staff, in passing situations, I would want my best 11 on the field. Having Jones and on the field makes me much more comfortable, coverage wise, than Jones and Wilcox.

Hopefully, Claiborne is not forced to miss any time but if he does, the coaches must be ready, and I only see two viable options to adjust. 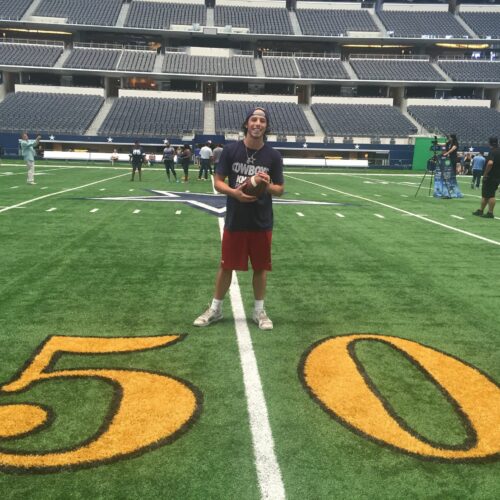 James Robertello
Hello, My name's James. I'm a senior in highschool and have been a Dallas Cowboys fan my whole life. If I'm not reading, watching, or talking about football, I'm playing rugby!
Previous article
Dallas Cowboys: 3 Players That Need to Play Better to Win in Week 11
Next article
Fist-Pumping Moments From Dallas Cowboys Loss To Tampa Bay

Despite entering Week 3 of the 2020 season, the Dallas Cowboys continue to carousel players in and out of the lineup opposite Safety Xavier...