In part one of this all defense mock draft I had the Cowboys taking Kony Ealy, Aaron Donald, Dee Ford and Marqueston Huff. Now we take a look at  selections in the fifth and seventh rounds. The Cowboys gave up 34 second half points in today’s game and it is obvious they need help on that side of the ball.

With the likeliness that Hatcher could be gone after the season, Manumaeleuna could be the next defensive linemen that the Cowboys could take. He stands in at 6’2 and 295 pounds. He can stand to put on a few more pounds and take over as the one technique tackle. Coupled with Ealy and Donald they could be putting together a fearsome front.

Urban is a huge man at 6’7” and could make it difficult to throw over the top of him. Urban would be more of a bit player. He plays more of the defensive tackle but I believe that would be an easy transition. Dallas has had success finding a starter in the defensive line in the past in this round and I think Urban is worth the look.

Seventh Round (From Chicago):

Nelson is someone who I thought would go in the 5-6 range but believe that his injury cost him. He tore his pectoral muscle and the Cowboys have a history of drafting linebackers with injury issues. Nelson only played in five games this season. This is a position that Cowboys need depth at. 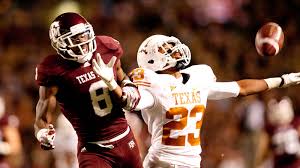 Seventh Round (From Kansas City):

Byndom isn’t a big bodied corner but he does have ball skills. More physical wide receivers can push him around but as we see with the current corners they need a guy who can catch. This selection could also be a place to take a flyer on a guy. He could definitely give B.W. Webb a run for the fifth corner spot with the injury issues with Mo Claiborne.