It’s often said that the most popular player on a team is the back-up quarterback.

This was probably the case for the 2016 Dallas Cowboys, of course that’s contingent upon who you asked. It seemed like the Dak-or-Romo conversation reared its ugly head in new and unique ways every week across the season, and there were a lot of people questioning the team’s decision even on a game-by-game and sometimes quarter-by-quarter basis.

If it was sometimes said that the most popular player on a team is the third-string quarterback then this would be the article for those people, because I’m about to pound the table for the Dallas Cowboys to bring back the legendary Mark Sanchez. That’s right, folks. Buckle up.

On Your Mark, Get Set, Dak!

The legend of “The Sanchize” in his early days as a New York Jet are some of the most successful that that franchise has seen, but to be fair we’re talking about a team that still clings to a 1968 Super Bowl Championship Team.

In all seriousness, Mark Sanchez went to the AFC Championship Game in his first two NFL years and did it in the New York market. That, while now six and seven years ago, it something that Dak Prescott knows a little bit about.

Maybe this is why across the 2016 Dallas Cowboys season we saw Mark and Dak become close. Maybe it’s because until Tony Romo returned from injury, Mark was Dak’s primary back-up. Or maybe it’s just because they’re two guys who simply gravitated towards one another.

Here’s the video of Al Michaels talking about Dak and Mark’s relationship back from when the Cowboys beat the Bucs. https://t.co/dBALUOzNjZ

We’d heard rumblings of the Dak-and-Mark connection, but it even took its place on the national stage when during a Week 15 Sunday Night Football contest against the Tampa Bay Buccaneers, NBC’s Al Michaels and Cris Collinsworth discussed the two’s relationship.

It’s fair to say that we all wanted Dak Prescott and Tony Romo to be buddies, and for all we know they were. Maybe it was only this particular story that’s been told that we know about. It’s worth mentioning – because it’s somehow questioned – that just because Dak is close with Mark does not mean that Dak is not close with Tony. In fact young Prescott has continually and publicly thanked Romo for all of his guidance and wisdom.

The truth of the matter is that it’s simply a matter of time until Tony Romo is no longer a quarterback on the Dallas Cowboys roster. If he’s playing football in 2017 it is going to be for someone else… but what about Mark Sanchez?

Mark Sanchez Seemingly Means A Lot To The Cowboys

Mark Sanchez is what he is but @dak has a relationship with him. The one time Dak was ever seemingly scared (Bailey’s FG)… he was with Mark.

When Dan Bailey was attempting to tie the game at 31 against the Green Bay Packers this past Sunday, Dak Prescott couldn’t bring himself to watch. He had his back turned, and this is is a disposition that is extremely uncommon for Dak. ‘Ol number four is the epitome of cool, so it’s interesting – and extremely understandable – that he’d be nervous about a big-time kick. What’s even more interesting is that in his moment of vulnerability he wasn’t with his buddy Ezekiel Elliott, he wasn’t with his star receiver Dez Bryant, and he wasn’t with Gold Jacket Jason Witten.

Dak Prescott chose to be next to Mark Sanchez, and even relied on Mark’s reaction to Bailey’s field goal before ultimately pumping his arms in celebration. I’m not a psychologist nor am I proposing that this suggests Dak and Mark have matching best friend bracelets, but this does say a lot about who Dak Prescott turns to in big moments.

I can’t imagine what Sanchez is telling @dak in these initial moments. If that relationship is meaningful to Dak then Mark needs to be back.

As soon as Mason Crosby ended the 2016 Dallas Cowboys season FOX showed an image that’s going to sit with us for a long time this offseason – Mark Sanchez consoling Dak Prescott. Dak, hands on his knees, can be seen glaring intensely at the field… perhaps trying to digest the pain of the moment. Mark Sanchez, left hand on Dak’s back, has his right hand over his mouth (presumably so his lips can’t be read) and is very obviously telling something to Dak.

Only Dak Prescott knows what Mark Sanchez said in these initial moments, but we can assume it was something about encouragement and letting Dak know that he’d likely be back in these types of games later on in the bright career that lays before him.

Mark Sanchez, as we discussed earlier, knows a lot about this situation. As a young-in in the NFL he experienced the heartbreak of losing the game before the Super Bowl… twice. In a row. In a gigantic media market. As its most visible face. And he never attained that level of stardom again.

Tony Romo is a far more accomplished quarterback than Mark Sanchez, and for all we know Romo had a similar discussion with Dak… we just weren’t privy to it. But no other quarterback that’s available knows this situation like Mark Sanchez and, unfortunately, Dak Prescott.

We’ll be discussing free agents that the Dallas Cowboys should keep, let walk, and try and bring in across the next few weeks and months (something I did on Wednesday’s episode of OchoLive), and one of those is Mark Sanchez.

The Cowboys also have quarterback Kellen Moore that they have to make a decision on. Many people that saw Sanchez in Philadelphia during Week 17 and Kellen Moore across the final stretches of the 2015 will say that they need to look elsewhere for the back-up – Dak-up? – to Dak Prescott. 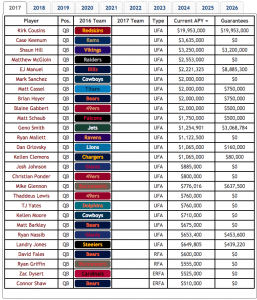 If you haven’t looked, this list if courtesy of OverTheCap.com, the crop of free agent quarterbacks is… well I’ll say that it’s not good.

Kirk Cousins will obviously be back with the Washington Redskins, but seriously… name a guy on here that you like more than Mark Sanchez. Of course the option exists that the Dallas Cowboys could trade for a back-up option, but is that the route that you want to go?

Mark Sanchez’s chemistry with Dak Prescott may be the advantage that earns him another back-up quarterback gig in 2017. If all things are equal amongst him and the competition – and looking at the current competition then it certainly seems that all things are at the very least equal – then this should play a huge role in Sanchez’s return to Dallas.

Ultimately the decision about a back-up quarterback will rest within the braintrust of the Dallas Cowboys – Will McClay, Jason Garrett, Stephen Jones, and Jerry Jones. I’m not advocating building a football team specifically around the preferences of its starting quarterback, I’m advocating taking those into serious consideration.

If I’m the braintrust of the Dallas Cowboys then I want to bring Dak Prescott in and ask him just how much Mark Sanchez really does mean to him. Was Mark helping him break down film, adjust to reads, and understand specific coverages? Or is Mark just his bro that he enjoys hanging out with and sometimes whips up on Madden? The answer to that question could potentially help mold Dak’s sophomore season in the NFL.

Dak Prescott is the franchise quarterback of the Dallas Cowboys. If he likes Mark Sanchez, then we all like Mark Sanchez.

Tell us what you think about “The Best Reason for the Dallas Cowboys to Re-Sign Mark Sanchez” in the comments below. You can also email me at RJ.Ochoa@SlantSports.com, or Tweet to me at @RJOchoa!