Can This DE Solve The Cowboys’ Pass Rush Woes?

Ever since the Dallas Cowboys and DeMarcus Ware parted ways a few seasons ago, the defense has been one of the worst in the league at sacking opposing quarterbacks. The Cowboys' pass rush woes were made even more apparent in their divisional round loss of the 2016-17 playoffs at the hands of Aaron Rodgers and the Green Bay Packers.

The Cowboys' pass rush has been a problem for several years now, which is probably why they tried to fix it by using a Band-Aid when they brought in the troubled DE, Greg Hardy. Hardy quickly burned his bridges in Dallas and hasn't received another opportunity to play in the NFL.

Dallas then decided to try to help their pass rush by drafting Randy Gregory, another troubled/talented defensive end. Gregory has spent more time suspended because of his drug-related problems than he has on the field for the Cowboys defense. This was a low risk/high reward situation, but was yet another failed attempt to improve the pass rush.

Luckily though, this is football and not baseball. The Dallas Cowboys are running out of strikes, but there are reasons to be optimistic with some of the players they currently have on their roster. It's unlikely they will be near the top of the league in QB sacks in 2017, but the DE position is getting younger and more athletic.

There are two defensive ends Dallas added to the roster this off-season who I think should improve the Cowboys' pass rush, Taco Charlton and Damontre Moore. Charlton has been talked about at length, which is understandable considering his draft pedigree. But, Moore is rarely mentioned and is an afterthought by most fans.

Yes, you read that right. I think the former Texas A&M Aggie, Damontre Moore, can make a difference in 2017. Even though he is an underdog to even make the final 53 man roster. 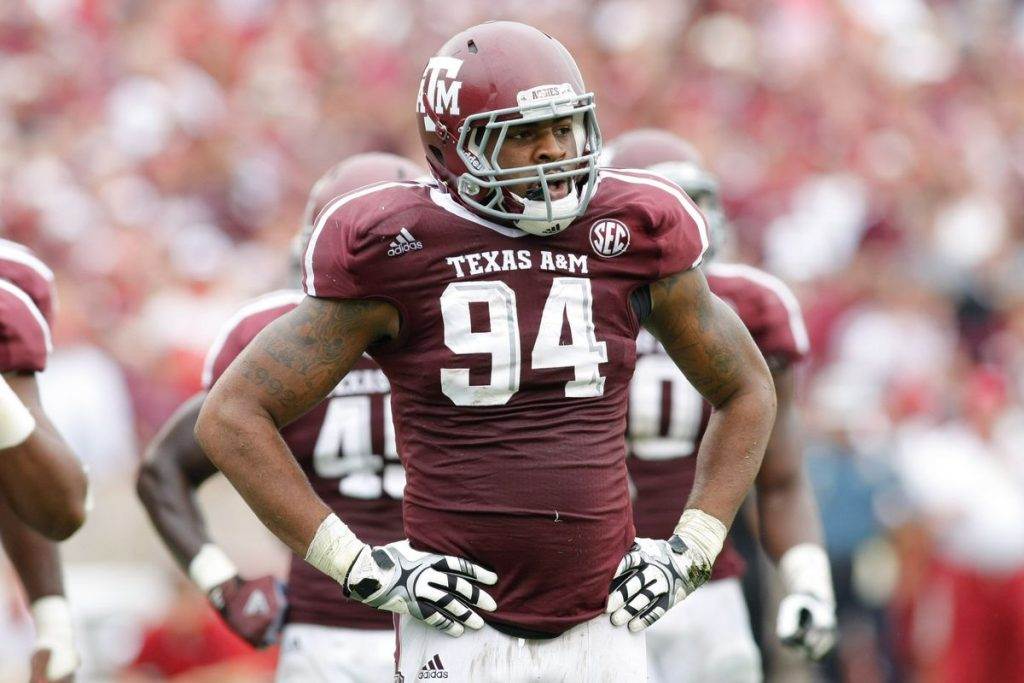 Damontre Moore was drafted by the New York Giants in the third round of the 2013 NFL Draft. In his short time in the league, he has been a member of five different organizations. That doesn't usually bode well for his chance to make a difference, but knowing this could be his last opportunity could cause him to finally become the player many thought he would be coming out of A&M.

At 6'5″, 250, Moore has a prototypical size and length to play either defensive end position in Rod Marinelli's 4-3 defensive scheme. But, that's not going to guarantee him a roster spot. In fact, there's not even much evidence to support my claim he will help the Cowboys' pass rush.

In just five seasons in the NFL, he only has 10 quarterback sacks under his belt and 5 1/2 of those came in 2014 as a member of the New York Giants. But, the talent is there. Maybe all he needs is the right motivator, a strong suit of Marinelli's. But, maybe he gets his motivation from returning to his hometown of Dallas and playing for his favorite team growing up.

I personally think #58 can help improve the Cowboys' pass rush in 2017, but only time will tell if I'm right or not.

All of this is really just a gut feeling. Or maybe I'm just grasping at air here and hoping Moore can finally reach his potential. Either way, someone has to step up, so why not the Da'Monster!

Do you think Damontre Moore can help the Cowboys' pass rush?

Not to mention he has a really bad attitude problem. Usually that bodes well for a defensive player, but he seems to direct his at his own team and coaches. Hopefully he can turn things around in Dallas, but its not likely.

He knows this could be his last chance to catch on with a team in the NFL. I think playing for his hometown team could make all the difference. At least, that’s what I’m hoping.

I hope your hope is correct.

Honestly, I don´t think he has the mental tools to be make a difference in the team, he will be a rotational guy at best, if any improve comes, will be a little bit each member, hopefully 5 or 6 DL members will be around 5 or 6 sacks each, none of them has the potential to be a double digit pass rusher, and the rest will be linebackers 5 or 6 all the LB, and 3 or 4 maybe the DB´s. that would sumarize around 40 plus.

The way Rod Marinelli likes to use his defensive lineman, just about everybody is a rotational guy. I think five or six QB sacks is what I would expect from Moore. That would help the pass rush, but they would need about the same from everybody else in order to improve in this area. It’s certainly doable.

Everybody loves a great story and the story of a guy like Moore turning things around and becoming the player he is capable of is a great story! I would certainly like to see that happen but when I look at the depth chart like you said “if he even makes the 53-man.” It will be a tall order and to make the roster he is going to have to have to be a great teammate and ride above the rest.

It’s definitely going to be a challenge, but I think he’s up to it. He knows his time is running out and this might be his last chance.