To say the Dallas Cowboys have been fortunate as an organization to have had some of the best wide receivers to ever play the game would be an understatement. I could sit here and throw numerous names at you, but you pretty much know who they are. One name that probably isn’t in that conversation yet is Dez Bryant, but should it be?

Now, I know opinions will vary as to whether or not Dez Bryant deserves to be mentioned in the same context as Michael Irvin, Drew Pearson, or Bob Hayes, but I’m of the opinion that it might start to be. Michael Irvin and Bob Hayes of course are Hall of Famer’s and it can be argued that Drew Pearson belongs there as well, so it’s understandable why Bryant isn’t linked to them very often. The good news is though, Dez Bryant does share something in common with each one of these WRs.

Dez Bryant shares a connection with Michael Irvin and Drew Pearson by the number jersey he was awarded when the Dallas Cowboys drafted him, #88. It’s a number that has been at the forefront of many big moments in Cowboys history and something Jerry Jones was hopeful Dez Bryant could continue during his tenure with the organization. Whether or not he has lived up to those expectations would be an interesting topic for discussion, but it’s Bryant’s connection with Bob Hayes I want to focus on.

Unfortunately, Bob Hayes’ playing days were before my time, but I know all too well who he is and what he meant to the Cowboys organization. Hayes played for the Dallas Cowboys for nearly a decade (1965-1974), and during that time he set numerous records that still stand today. But, one of his records is in jeopardy of being broken by Dez Bryant after standing for nearly 50 years.

You would think Dez Bryant tying Bob Hayes for the most touchdown receptions (71) in Cowboys history would’ve garnered more attention last week, but it kind of slipped the cracks. I’m sure it was mentioned at the time, but I think everybody was so caught up in the dominant performance the Cowboys had put together against the 49ers, that it was quickly forgotten.

Well, I’m 100% positive that it will be a big storyline this week against the Washington Redskins. Dez Bryant has a chance to sit atop the TD reception list for the Dallas Cowboys if he can find himself in the end zone this Sunday against the Redskins. But, it probably isn’t going to be an easy thing to accomplish.

You see, it’s looking more and more as if Josh Norman will be back on the field when the Dallas Cowboys come to town. Norman has missed the last few weeks due to an injury, but you can bet he will not pass up the chance to battle Dez Bryant, even if he’s not at 100%. 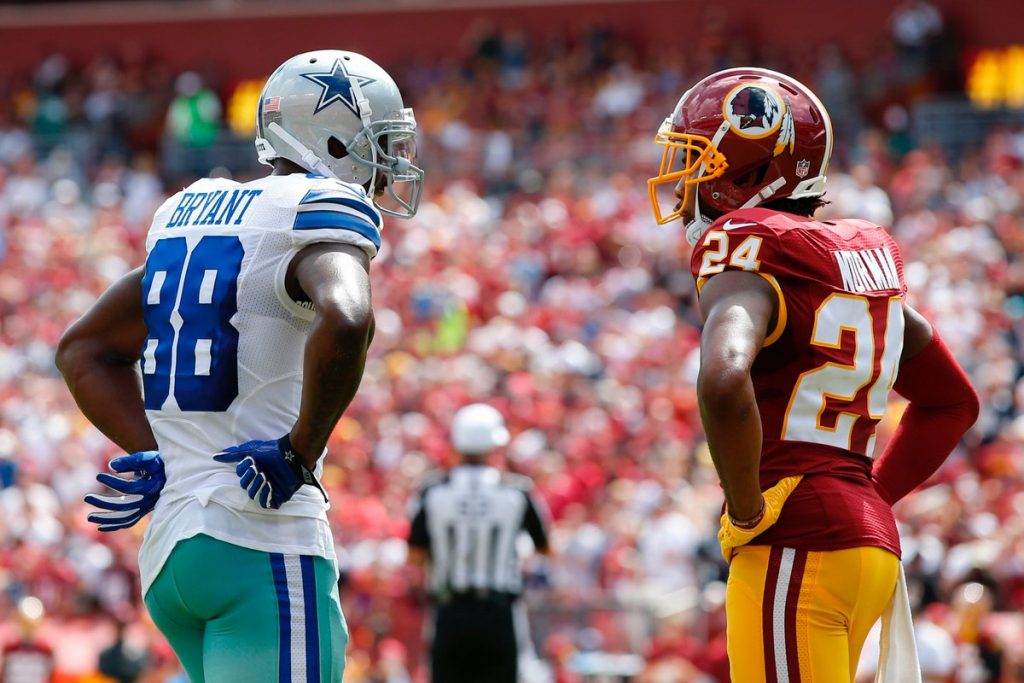 It’s pretty much guaranteed it will be entertaining every time Dez Bryant and Josh Norman square off against one another. They are two of the more fiery competitors in the NFL and neither one of them wants to give an inch to the other. We have seen it in past ballgames and now in commercials. So, you can bet Norman will do his best to keep Bryant from breaking Bob Hayes record against him.

Now, I’m not going to bet against Dez Bryant though. If I was him, I think it would just add more fuel to the fire. What better way to break a record that has stood nearly 50 years for the Dallas Cowboys than to do it against someone you respect and despise at the same time? That is exactly what Josh Norman is to Bryant.

I know I’m biased, but I really hope Dez Bryant is able to score the 72nd touchdown of his career and surpassed “Bullet Bob” Hayes. Not only would it be amazing to do it against a competitor like Josh Norman, but it would prove beneficial to the chances of the Cowboys beating the Redskins. That is the bigger picture after all.

Do you think Dez Bryant can break Bob Hayes record against Washington?