Defense. Defense. Defense. It has been the point of emphasis in all of the losses for the Dallas Cowboys so far this season and will continue to be so until things change. Things could finally be turning around for the Cowboys defense though now that nearly everyone is healthy and back from their suspensions. The return of Sean Lee should especially improve the performance of the Cowboys D.

The last two games against the Los Angeles Rams and Green Bay Packers have been especially tough for the Cowboys defense. Both games were in the grasp of the Cowboys, but the defense unfortunately wasn't able to hold up their end of the bargain. It's no coincidence that Sean Lee missed both of those contest due to injury.

In all honesty, it's a little scary to think that the Dallas Cowboys defense depends so heavily on a 31-year-old linebacker that has struggled to remain healthy his entire NFL career, and even college for that matter. But, there is no denying that the defense is an entirely different unit with Sean Lee in the lineup.

Luckily, the Dallas Cowboys bye week couldn't have possibly come at a better time. Sean Lee absolutely needed more time to recuperate from his hamstring injury and the bye week provided that. I believe he will be ready to go against the San Francisco 49ers in Week 7, which is extremely good news for the Cowboys defense.

But, Sean Lee can't improve the performance of the defense alone. He is only one defender and it takes an entire unit doing their jobs to be successful. It's time for everybody to step up their game.

Fortunately, the return of Anthony Hitchens last week will also help the Cowboys defense. He will move back to the middle linebacker position and be an upgrade over Jaylon Smith. Nothing against Smith, but he simply isn't ready to be depended on right now as a starter. But, he does show a lot of promise. He just needs more time.

All of the youth in the secondary really needs to step up as well. We have seen improvements and reason to believe they will see the field more on a regular basis. But, each and every one of them needs to become more consistent play after play.

And I don't know about you, but I'm hoping DeMarcus Lawrence can continue to dominate as a pass rusher. That not only helps the young secondary for the Cowboys, but the entire defense as well. He's on pace to break the all-time QB sack record, and I personally hope he reaches that goal.

Do you believe Sean Lee can save the Cowboys defense?

he won’t save the entire defense but he will help improve it dramatically, especially against the run. The numbers don’t lie, he is probably the best linebacker in the league against the Run. The last 2 weeks proves that. Plus, the Cowboys haven’t been healthy on the defensive side of the ball all year. Let’s see what they can finally do with everybody back.

Wayne, I completely agree. Sean Lee is certainly going to help improve things, but the entire defensive unit really needs to step up. Hopefully now that everybody is healthy and back from suspensions we see a much improved defense.

No question Lee returning is of major significance. He allows HItchens to go back to MLB and gives us our strongest LB potential. Two extra weeks should be good for everyone on the defense. The young DB’s get more practice time, Hitchens and Lee get back to speed, Irving gets more time under his belt. The other thing I hope for is continued growth, with less pressure from Jaylon Smith. Also, could these two weeks be a chance for Taco to work out some kinks and become more of a factor. I am also wishing for the staff to see the error of their ways and get Jeff Heath out of the starting line up. I would love to see more of Xavier Woods and Chido at the safety position. I wonder if maybe the two of them could be the future at safety and maybe Byron Jones goes back to CB. Maybe he would be better able to reach his potential there instead.

Everything you said is exactly why the bye week is so important. The only thing I really disagree with this moving Byron Jones to CB. I think people underrate what he does, but that’s understandable. He already plays a flex S/CB position. I think a lot of fans want to replace him because they don’t really see how making plays on the ball.

I don’t necessarily disagree with your opinion about Byron Jones. It is entirely possible if he gets a stronger partner to play with at the safety position that his playmaking abilities will become more apparent to us so I’m okay with him staying at safety. it was really just a thought about moving him to cornerback

You’re not off-base at all. Jones plays a flex position where he plays a lot of safety and corner. I think if the Cowboys could surround him with some more talent, we would see more of his playmaking ability

I do not disagree with moving Jones to corner I think he is right. Jones plays better as a corner than he does safety. Also awuzie and woods at safety with Jones brown and lewis at corner would make a respectable secondary. Then Irving Collins and taco make a decent line to build off of. Smith Hitchens and Wilson make a very young and decent linebacking core. Dallas will draft a receiver but I think they go after safety linebacker and corner in the draft maybe defensive line as well. This is all considering Lawrence doesn’t come back

I always saw Jaylon Smith as an OLB at the pro level, and Lee a MLB. But I defer of course to what the coaches see. Lee is a wrecking ball when healthy as an OLB, no disputing that.

This defense is weak at SS and I would – love – to see Smith try it. He had a long run in pursuit against the Rams, that really showed his straightline speed. I think it’s mostly back.

If Smith can play SS, he would terrorize receivers.

When studying Smith, I saw a player that could play any LB position. I never really saw him as an SS though. Unfortunately, I haven’t seen the player that I studied at Notre Dame yet. He’s not moving around well yet and is really struggling when he’s asked to play sideline to sideline. His straight-line speed looks like it’s back though. He just doesn’t look right to me and I’m hoping he just needs more time to recuperate/develop.

These position moves are always a dice roll. I remember the late 1980’s when Mark Tuinei was a DL’er under Landry. He got moved to LOT, I believe out of need. Then Jimmy Johnson turned him into one of the best LT’s.

So I like speculating about it when there is a team need. Randy White, famously was drafted at LB size and his first year was an attempt at MLB. He never caught on to the job. So he bulked up in the offseason, moved to DT, now in the Hall.

There was worry to start the year that Smith was being rushed into service. I’m not sure. I see the speed, but it might still be lateral movement problems, or MLB is not his spot.

Assuming a full recovery, another issue is whether he should ever come out of the game. I want to use him in blitz packages, no matter if from LB, SS, wherever.

I believe Smith will still receive plenty of playing time. He needs to get on the field more to help with his development, but he’s simply not ready to receive starting repetitions. And you’re right, position moves are always a roll of the dice. I’m not against using Smith as a SS. I just don’t see the movement from him yet required to play the position. I personally would be surprised to see him line up as a DE in some passing situations. I think I’ve already seen him do that once this season. 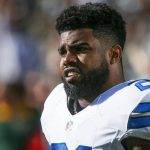 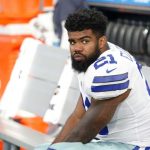