Ever since the Dallas Cowboys' heartbreaking Divisional Round loss to the Packers (2016), the hot topic has been how to improve their pass rush. It's completely understandable, but there are no clear answers about how to do it. I'm probably in the minority here, but I think the Cowboys' pass rush will improve in 2017 because of second-year defensive end Charles Tapper.

Unfortunately, Charles Tapper didn't get to prove what he can do for the Cowboys' pass rush last year. He pretty much had to redshirt his first year in the NFL because of a back injury he sustained in training camp.

What was initially believed to be nothing more than back tightness was eventually diagnosed as a Pars Defect injury, or what is better known as a fractured vertebrae. Unbeknownst to him, it is an injury he has had since childhood, but has never caused him any problems.

It looks as if Tapper is now 100-percent ready for the Cowboys' off-season practices. We still have the rest of free agency and the draft to get through, but as things stand right now, he gives me the most hope for an improved pass rush this in 2017.

You may have forgotten, but the Dallas Cowboys drafted Charles Tapper with the first of their two fourth round draft picks in 2016. The second of course was used to draft Dak Prescott and we all know how that turned out.

Hopefully, Tapper can follow suit now that he is 100% healthy. 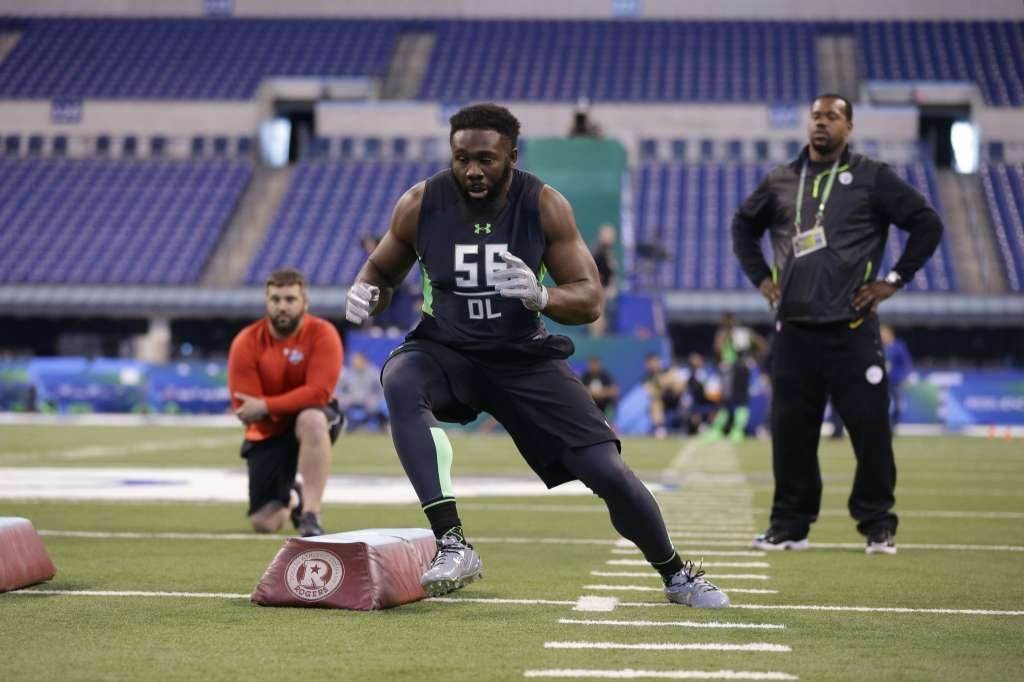 Who is Charles Tapper?

Charles Tapper is a second-year defensive end out of Oklahoma. At 6'2″, 271-pounds, he has the prototypical size for a 4-3 defensive end and the athletic ability to be a really good player in the NFL.

Tapper was one of the top performing defensive ends at the 2016 NFL combine. His 4.59 40-yard dash was the best among the DEs in 2016 and would've tied him for third amongst this year's draft class with UCLA's Takkarist McKinley, who is about 20 pounds lighter.

Of course, a player can't be solely judged by their 40-yard dash, especially a defensive end. But, that speed can be utilized to chase down ball carriers from behind and to put opposing offensive tackles in a difficult position when rushing the quarterback around the edge.

He is also able to convert that speed into power when he utilizes his bull rush. It often results in offensive tackles looking as if they're wearing skates.

One of Tapper's more underrated attributes as a player is his impressive wingspan.

He has 34 3/8” arms, which allows him to set a strong edge in the running game by keeping offensive lineman from getting into his body. That arm length also comes in handy as a pass rusher. He uses it effectively by not allowing offensive lineman to get their hands on him. It really makes him a difficult player to block coming off the edge.

Charles Tapper will be a difference maker in 2017

You may think I'm jumping the gun a little bit by saying Charles Tapper will be a difference maker for the Dallas Cowboys in 2017, but if not for his back injury last season, he probably would've been the starting RDE.

Tyrone Crawford was forced to move from the inside of the Cowboys defense to the outside to fill that role, but that shouldn't happen with a healthy Tapper.

Charles Tapper already has the benefit of being in defensive coordinator Rod Marinelli's 4-3 defensive scheme for a year and is probably the Day 1-starter as things stand now. That redshirt year has also allowed him extra time to take advantage of the Cowboys' strength and conditioning program to redefine his body. This should allow him to be a much more effective player.

Another benefit to basically red-shirting his rookie year in the NFL is it has not only given him extra time for his back to heal, but it has also allowed him to develop a more diverse pass rushing repertoire. When watching his game film coming out of Oklahoma, you didn't really see him rush with any kind of plan and didn't really know how to use his hands as a pass rusher.

This should definitely change in his second year, which will make him a more complete player.

He is still a somewhat unknown commodity, because we didn't really get to see what he can do in a game situation. However, I believe that he is already better than anybody the Cowboys can draft this year. He has the skill set to be a disruptive force against both the run and the pass as a defensive end.

We'll have to wait and see if the Dallas Cowboys believe as I do, but we shouldn't have to wait long to get our answer.

If the Cowboys pass on drafting a defensive end in the first couple of rounds, we can probably assume they think Charles Tapper can take the next step in his career.

Do you think Tapper improves the 2017 Cowboys pass rush?

Travis, I agree we haven’t seen anything from Tapper that would suggest he will be a difference maker in 2017. But, that’s basically the same type of assumption you would receive if you drafted a defensive end at 28. The only difference is that Tapper has had a year in the system and a year of NFL coaching to improve his craft.

I think there is every reason to be optimistic about Charles Tapper and his contribution to the Dallas Cowboys. Yes, he is an unknown quality because he has yet to play in an NFL game, preseason or otherwise, but indications were that he was progressing nicely in training camp until he was sidelined with his back. As a Dallas and and Oklahoma fan, I am excited to see what he can do at the next level.

LD, I agree with everything you said.

I wish there was a way to confirm how Tapper’s back is coming along. You don’t see him mentioned a lot here, or in the Cowboy Forums.

You and me both. He seemed to think he was 100% ready to go before the Cowboys placed him on IR last season. So hopefully the extra time will allow him to heal up even more.

A strike for a quality RDE in Round 4 would be a strike indeed. I think you have to figure in a learning curve for Tapper at best, whereby Lawrence is far ahead of him for 2017.

It’s true Lawrence could still flip sides and Irving could still work both LDE and DT, but I’m guessing the plan for now is to put some chips on Irving turning the next corner in his game. If he does that, that is my LDE down in / down out. That puts Lawrence back at RDE, where I think he can contribute QB pressures at times & play the run well.

One element in this that can turn things upward is – like Irving – the improvement curve of Maliek Collins. We know he has the physicality to be a great DT. If he is on the rise and Lawrence is at RDE, we’ll get pressure from that side.

I’d rather get a premiere prospect in here for RDE of course, but if they are gone and the CB’s are not, then IMO adding an impact CB is the shortest route to defensive upgrade this year.

Russ, everything you say is true. I however think Irving is better when he plays on the inside. His length and quickness off the ball give interior offensive lineman fits. The point I was trying to make is that I don’t know if DE is as big of a position of need as everybody seems to think. I’m sure the Cowboys want to find a dominant pass rusher, I just don’t know if there will be one available in the draft. All off this will work itself out in the off-season practices.

i think we had above average pass coverage last year and that helped the below average pass rush. I dont believe carroll is as good as carr and we have done nothing to improve our pressure on opposing qb,s. so one or the other needs to be addressed at some point or a great defensive coordinator will take the fall for an inadequate general management job.

I honestly think our secondary is about the same. I think we will add more talent to the secondary and pass rush through the draft, which will hopefully help the defense.

I’m in. Wasn’t a fit in OU’s 3-4 yet was still a productive End player for them. I’d like to see him get a bit lighter so he could use his speed and athleticism a bit more. There are enough guys who have the power game, Tapper could be the guy that rushes with speed.

I think he will make an impact this year.

I don’t know if he needs to get lighter. He’s already a 4.5 40 guy at 270 pounds. That’s a rarity. That should help him hold up against the run and allow him to chase down running backs. I’m really looking forward to seeing what he can offer.

With his back history, it would help him to shed even 5 to ten pounds and would still leave him with enough size to play the RDE spot. Could only help with his jump, agility, and finishing.

I imagine that with basically a year in the strength and conditioning program, we will see Tapper with a remade body. I’m sure the staff focused on strengthening his back and getting him to where they think he needs to be to perform at his best.

They’ve had a lot of practice with Back/core strengthening with Romo. I’m really looking forward to training camp to see if he can push for a starting spot.

You can also add DeMarcus Lawrence. He has had back issues as well. I think a lot of us are really looking forward to training camp. There are high expectations for 2017

Looking forward to the competition that will be had for EDGE Snaps between Lawrence, Tapper, Irving, Moore, and their draft pick.

I agree. It is definitely going to be one of the camp battles everyone will be paying close attention to