Injuries to players this early into the season can sometimes be pretty misleading. Some players who are sore or recovering from an offseason injury may take it easy in OTAs and mini-camp, but Cole Beasley’s injury has me slightly concerned.

After Wednesday’s mini-camp practice it was reported that the injury sidelining Cole Beasley for the entire offseason program is something he’s been dealing with dating back to week 10 of last season.

Not something you want to hear about one of your biggest offensive weapons.

While this could just be precautionary to make sure Beasley is a full-go come training camp, it’s certainly something to keep a close eye on.

Cole Beasley has been the Cowboys’ best receiver the past two years and was rated as the 13th best wide receiver in the league by Pro Football Focus in 2016. Over the last two seasons he has 127 catches for 1,369 yards and 10 touchdowns. Beasley led the team last year in receiving yards, receptions, and receiving first downs.

If you’re catching what I’m pitching, you know Beasley is a huge reason for the offense’s success. 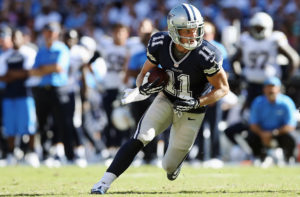 In the worst case scenario, if Beasley does happen to get shut down for a while, Ryan Switzer would likely step in and take over as the team’s starting slot receiver.

Selecting Switzer in the fourth round makes a lot more sense knowing what we know now about the nature of Cole Beasley’s injury.

Switzer has all the tools to be a very productive slot receiver in the NFL, but he’s yet to do it.

Obviously, the best case scenario is that Cole Beasley being sidelined right now is precautionary and he can be a full-go come training camp.

While often overlooked due to his size, Beasley is one of Dak Prescott’s favorite weapons to use, and they were one of the best quarterback-wide receiver duos in the NFL last year.

It’s too early to worry too much about this injury right now, but it is something to monitor as the offseason progresses. If I were a betting man, I would expect Cole Beasley to be able to play a game tomorrow if need be, he even said so himself Wednesday in a post-practice interview.

Do you think the Cowboys could survive without Cole Beasley? Or would the offense struggle badly? I would love to hear your thoughts!