After the first three weeks, the 2-1 Dallas Cowboys are in pretty good shape heading into week four. In the first three games we've slowly but surely seen the defense get better, Dak Prescott and Ezekiel Elliott have found their grooves, and the play calling has improved. What has yet to improve, that I'm sure surprises us all, is the offensive line.

Through three weeks, it's not an exaggeration to say that the offensive line has been the worst position group on the team. Trust me, I can't believe I'm saying that either.

In recent years we've seen the OL struggle in maybe one aspect of the game for a game or two, but two weeks in a row the Dallas OL has been bad across the board. The first question that will always get brought up is, are they struggling because of the departures of Doug Free and Ronald Leary?

While that certainly doesn't help the cause, Tyron Smith, Travis Frederick, and Zack Martin haven't been playing at the All-Pro level we're used to seeing. If I had to guess, it's likely due to each lineman feeling out the new man beside him.

If you didn't know this yet, you do now. Each Cowboys' offensive lineman has never played in a regular season game lined up beside the teammate he's currently playing alongside, other than Travis Frederick and Zack Martin. Even then, Frederick has a new face at left guard in Chaz Green. 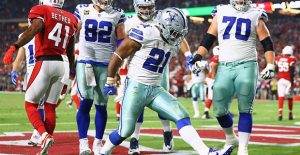 Why does that matter?

For example, Travis Frederick never used to worry about passing his man off to Ron Leary. Tyron Smith never had to worry about giving Ron Leary some help inside while also dealing with whoever is screaming off the edge.

The main reason behind that is because those five guys had played so many snaps together as a unit. So far this year, that has changed. Each lineman is having more responsibilities helping each other out.

The current five starters have only played three regular season games together and are still feeling each other out. The first team unit didn't get many reps together in preseason due to injury concerns with both Tyron Smith and Chaz Green.

So far it hasn't been pretty, but eventually this OL will figure it out.

It may take another week or two to fully gel, but I personally don't think this is a long-term issue. We saw at the end of the Arizona game that Dak Prescott was getting more time to pass, and Ezekiel Elliott's running lanes were opening up more and more.

The Dallas Cowboys offensive line hasn't had it easy the first three weeks by any means, facing three of the better defensive lines in the NFL. It doesn't get any easier this week when the Aaron Donald-led Los Angeles Rams come to town on Sunday.

This week will be a big test to see if this OL has improved at all in the last two weeks. Are you concerned about the offensive line play long-term? Let me know below!

Connor Livesayhttps://insidethestar.com/
Born in 1995, loved Football but more importantly the Dallas Cowboys since day one. Living in Redskins Country flying the Blue and Silver flag as high as possible. Covering the Dallas Cowboys for InsideTheStar.com and CowboysNation.com. Catch me on twitter @ConnorNFLDraft!
Previous article
Dallas Cowboys Wishlist VS Los Angeles Rams
Next article
Cowboys Secondary: Too Soon To Start CB Jourdan Lewis?

That may all be true, but from what I hear, the cause may be the new practice schedule. I remember Jimmy Johnson’s first camp in 89. If I am not mistaken, those guys were in full pads in the 1st practice! I am not really advocating that, but there has to be a little more contact. Time, as you wrote, in camp is necessary for things to come together on the O line. Just my opinion.

IMO the O line concerns can be solved in a snap by bringing Collins back to LG and replacing him with an experienced Right Bookend who can hold his own. Unless a guy like that was available as a FA, Dallas can’t afford to trade.

Agree that cohesion is always an issue with new OL’ers starting, and will mostly resolve itself over maybe 6 or 8 games. It would seem so far that Collins is emerging at RT and that’s going to take hold, but that Green is an open question.

The Cowboys may have to deal for a proven OG before the trade deadline. Meanwhile, I’d try to rely more on Elliott’s superior individual ability. Meaning, more pitch plays where he has a chance to just outrun defenders to the edge. And I’d bring McFadden in fresh when EE needs a breather, and do the same.