It's nearly impossible to predict what the Dallas Cowboys or any other NFL team will do in the 2017 NFL Draft, but sometimes studying the history of past selections can shine a light on certain tendencies. Case in point, the Cowboys fondness of drafting Chris Petersen coached players.

Chris Petersen isn't probably a name that many of you are very familiar with, but I can assure you that the Dallas Cowboys know all too well his talents as a coach. 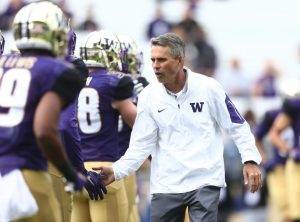 The Dallas Cowboys currently have several players on the roster that played under Petersen during that time span at Boise State, and all of them but one were drafted by the Cowboys.

Orlando Scandrick, Tyrone Crawford, and DeMarcus Lawrence are all former Broncos that played under Petersen's tutelage while at Boise State. All three players were drafted by the Cowboys to hopefully become cornerstone pieces for the organization. Scandrick and Crawford have both received contract extensions, while Lawrence still has a lot to prove.

Of course, who can forget “Mr. Boise State”, Kellen Moore. He broke all kinds of passing records for the Broncos under the watchful eye of Chris Petersen.

The point I'm trying to make is that the Dallas Cowboys clearly like how well coached Chris Petersen's players are coming out of college. Now that he is with the University of Washington, I wouldn't be surprised at all if we see the Cowboys focus their attention on a few former Huskies.

There are certainly some talented players the Dallas Cowboys have to choose from coming out of University of Washington, headlined by cornerback Sidney Jones. 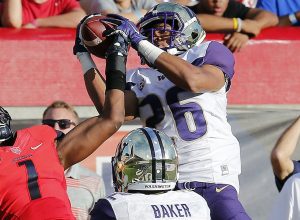 My fellow staff writer, Sean Martin, has fallen in love with Jones and believes he should be in play for the Cowboys' 28th pick. I know Sean would be ecstatic if this was indeed the way things turned out, but there are other Huskies available in the 2017 NFL Draft that makes sense for the Cowboys as well.

Wide receiver John Ross, safety Budda Baker, defensive tackle Elijah Qualls, cornerback Kevin King, and defensive end Joe Mathis are all players the Cowboys could target at some point in the draft. Each one of these players are not only a scheme fit for the Cowboys, but would likely be an upgrade over what is currently on their roster. At the very least, they would provide valuable depth.

Now, I'm not saying we will see the Dallas Cowboys end up with one of Chris Petersen's former Huskies in the 2017 NFL Draft. But, you can bet that they may be ranked a little bit higher than others based on past experiences.

Do you think the Cowboys will turn to Chris Petersen coached players once again?

Let me hear your thoughts and opinions in the comment section below.

Malik Hooker joined the Cowboys this offseason after his rookie contract with the Indianapolis Colts expired. But had he not been such an attractive...
Read more
Cowboys News

The old saying "don't count your chickens before they hatch" seems fitting for the way the Dallas Cowboys 2019 season has turned out so...
Read more
Cowboys News

Chris Petersen dropped a bombshell Monday afternoon when he announced that he will be stepping down as the head coach of the Washington Huskies...
Read more

Both players would definitely be upgrades.

Sidney Jones, would fit the Cowboys defensive scheme, like a kid glove at corner. Also I wouldn’t be surprised if the Cowboys selected king and qualls and baker, all on defense.

All of these Washington players fit a need and all of them would be an upgrade to what the Cowboys currently have on the roster.