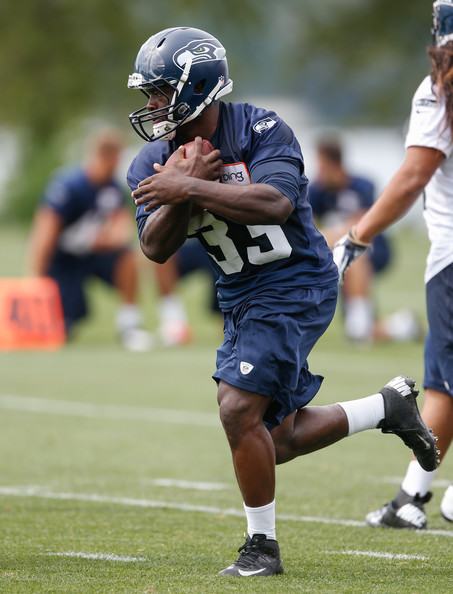 I raised an eyebrow when the Cowboys kept 11 Defensive Lineman on the 53, leading me to believe they were going to make a move somewhere. Now that move has become official leading to the release of Lavar Edwards.

As announced earlier today, Running Back Christine Michael will be joining the Dallas Cowboys. He will join Darren McFadden, Joseph Randle, and Lance Dunbar in the backfield. But, how exactly does he fit with this team?

Looking at his Scouting Report coming out of Texas A&M, I may have an idea on how this Coaching Staff will use him. Current reports on him say he still struggles in pass protection; which is fine as I do not feel he will be asked to do much of that in Dallas, at least not this season.

With his size and explosion through the hole, it makes him a perfect candidate for short yardage and Goalline situations. His low center of gravity will allow him to get under the defender's pad level and lean forward for the yards needed.

With the pass blocking skills of McFadden going along with the receiving abilities of Randle and Dunbar, Michael will not have a lot on his plate early on.

He is stepping into a very good situation as he will not be asked to carry the load and Running Back Coach Gary Brown will be sure to work on his weaknesses during practice.

He provides insurance for McFadden who will not have to take on the short yardage duties, which could be a key factor in keeping him healthy through the entire season. Which may be the best and least talked about aspect of this deal.

If he is active for the Giants game is more than likely up to him.

He needs to enter Valley Ranch willing to jump into the playbook, if so he probably will be active on the Gameday 46. I personally would like to see him suit up for this game, it will allow us to have an early indication of exactly how this rotation will look.