Cowboys Consistency Must Be Found Up Front Vs Redskins

For as much as the Cowboys' 3-3 start mired with inconsistency has been scrutinized, the team is coming off of a 30 point bludgeoning of the 49ers on the road – looking like not only the better team by a wide margin, but the team that was one of the NFL's best just a year ago.

Still staring up at the 6-1 Philadelphia Eagles, the Cowboys have a lot to play for in front of them with a divisional game against the Redskins this week and both meetings with the Eagles ahead.

When noticing all of the blame that's been put on various units of this Dallas team through their slow start, I can't help but notice those in Cowboys Nation that have looked right past an offensive line that's naturally taken time to work in new starters at LG and RT.

Replacing solid, long-term starters in Ronald Leary and Doug Free with  Jonathan Cooper and La'el Collins, the Cowboys got back to what they do best by exposing the fourth worst rushing defense in the league last week.

Ezekiel Elliott's inspired performance against the 49ers helped the Cowboys as a team play complimentary football in all three phases. A rightfully criticized defense put Sean Lee and Anthony Hitchens back on the field together – a usual great sign that Rod Marinelli's unit will be able to hold its own and limit big plays.

While most will again be focusing on this defense in a stiffer test against Kirk Cousins and the Redskins on the road, I'll be most interested in the Cowboys proving their line play is still at a consistently elite level. 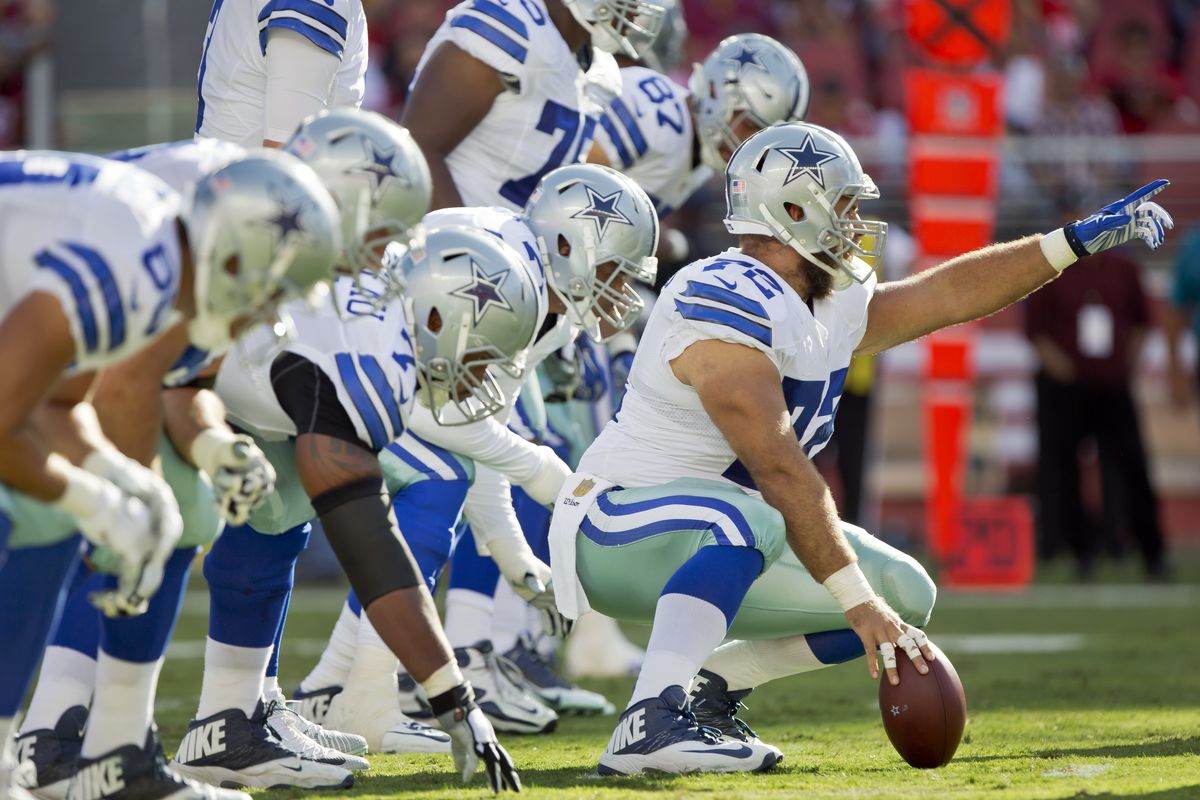 Opportunities should be there for this Cowboys offensive line to impose their will against a Redskins team that allowed 127 yards on the ground in Monday's loss at the Eagles.

The best sign for the Cowboys offense looking to carry them to another road win this week is how easily the Redskins defense was stretched out and moved off the ball against the Eagles on plays like these. On the above play, the center's reach block allows the RG to work to the second level, where LeGarrette sees a cutback lane to power downhill and beat the angle against a DB in the hole for a massive gain.

Getting to the second level came easy for the Eagles line against the Redskins front, and this is obviously something that the Cowboys offensive line prides themselves on.

Ezekiel Elliott was running with the same burst, elusiveness, and vision that made him the league's rushing champion as a rookie for really the first time this season on Sunday. Showing off all of these traits on a well-blocked play here, it is the movement ability of C Travis Frederick that allows him to work up to the MIKE linebacker and let Zeke follow his blocks for a big gain.

I wrote after the game that Jonathan Cooper meshing athletically with the rest of these starters up front was a massive sign of progress for the Cowboys, and you can read about his performance and more in Sean's Scout.

As we get back to the importance of Dallas' offensive line carrying the Cowboys over .500 with consecutive wins for the first time in 2017 this week, watch the Eagles' front steer defenders out of the hole on a speed sweep to Wendell Smallwood. The RG is able to power through the DE in front of him, which is so impressive with the way his man was lined up directly over him pre-snap. It is his block along with the swinging guard's that allows Smallwood to find a crease and fall forward for a positive gain.

The Cowboys will absolutely deserve to enter the discussion of NFC contenders alongside the Eagles should they follow-up their dominance of the 49ers with an even more impressive win against the Redskins. Not a lot will need to change in this step up in competition for Dallas.

The Cowboys ran for 265 combined yards in two wins over the Redskins last year, their most against any NFC East rival. Efficient offense will play this team right back into contention, and the next step for this dominant offense is to prove they can win up front against Washington this week.

Good work, Sean. I just read the Redskins have 4 of 5 starting O line significantly injured so wee should also (hopefully) be able to dominate with our D line and pressure Cousins into rushed throws and possibly 2-3 INTs. A win moves us into 2nd, 2 games left with the Eagles and with the rest of the NFC open, a stronger position as a wildcard if not Divisional title.

Thank you for reading, Ethan! I appreciate it. I tweeted this out, but this is a must-win game for the Cowboys when you factor in the Redskins’ injury situation. Also add in the rain that the D.C. area is expecting and everything is pointing towards Dallas picking up some more momentum Sunday.