In three weeks we will have regular-season NFL football happening! Isn’t that ridiculously exciting?!

There are three weeks until the Steelers and Patriots game gets going, but an extra 72 hours until the one that really matters. That’s 24 days for all of the math whizzes out there, which means that we are going to continue our Countdown To Kickoff series with the Greatest 24 in Dallas Cowboys History.

The Following Players Have All Worn 24 For The Dallas Cowboys:

The Dallas Cowboys thought that they addressed the future of the running back position when they found themselves with Julius Jones in the 2004 NFL Draft.

It never hurts to have insurance so the Cowboys took a Golden Gopher out of Minnesota in the 4th round of the 2005 draft.

Marion Barber had an interesting rookie year, but he really drew the eye of the NFL in 2006 when even though he only had 654 yards – he had 14 touchdowns.

Marion became widely regarded as a goalline type of back that forced his way through tacklers in a barbaric fashion. 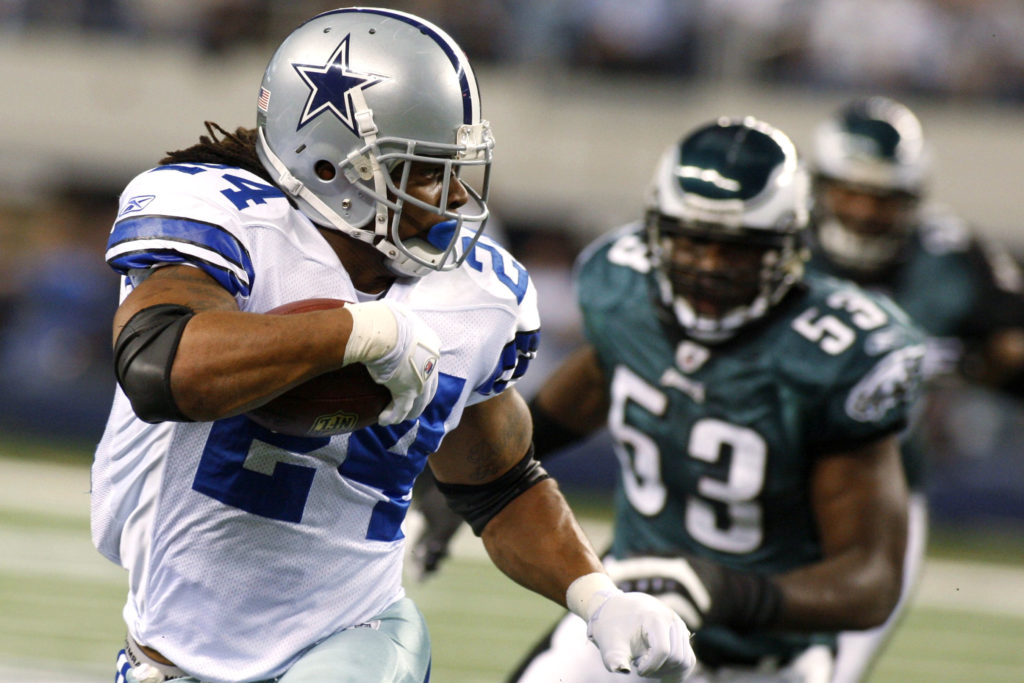 The 2007 season was even kinder to MBIII as even though he didn’t start a single game, he recorded 975 rushing yards and 10 touchdowns on the ground.

The Cowboys enjoyed a lot of success that season, going 13-3, and a big reason why was that they wore their opponents down throughout games.

Marion Barber was the reason that the Cowboys wore opponents down as while they were panting with hands on their knees late in the fourth quarter – Marion Barber got stronger.

He gained energy as the game went on which made him one of the more incredible running backs at the time.

Marshawn Lynch gets a lot of hype for his style of running, but Marion Barber was just an earlier version of Beast Mode, even wearing the same jersey number. Unfortunately, the Barbarian falls short of our Greatest 24 honor, but he is the proud owner of the Greatest 2-Yard Gain in NFL History.

There was a TCU Horned Frog hanging around on the Dallas draft board when the 12th round of the 1991 NFL Draft hit. The cornerback went by the name of Larry Brown and he fought hard to show what he was made of.

He impressed everyone so much that he became the first Cowboys rookie to start at corner since Ron Francis in 1987.

From early on Brown showed that he had the goods to play in the NFL as he started 28 games in his first two seasons.

That second set of 16 games led to the Cowboys winning Super Bowl XXVII, a game in which Larry had an interception in the second quarter.

When the 1995 season started the Cowboys were a hot commodity. They had won two out of the last three Super Bowls and were in contention to sign a prize-free agent – cornerback Deion Sanders.

When Kevin Smith tore his Achilles in the first game of the season Sanders became a priority for the team. With Deion’s signing the corner tandem of Brown and Sanders was born.

Deion Sanders is arguably the greatest defensive back to ever live.

With talent like that on one side of the field opposing quarterbacks were forced to throw to Brown’s side, and he made them pay. Brown's finest season in the NFL came in 1995 as he reeled in 6 interceptions, returning 2 of them for touchdowns.

When Dallas reached its third Super Bowl in four years the stage was set. Win and you’re a bonafide dynasty.

Among a team of superstars at all positions, even his own, Larry Brown shined. 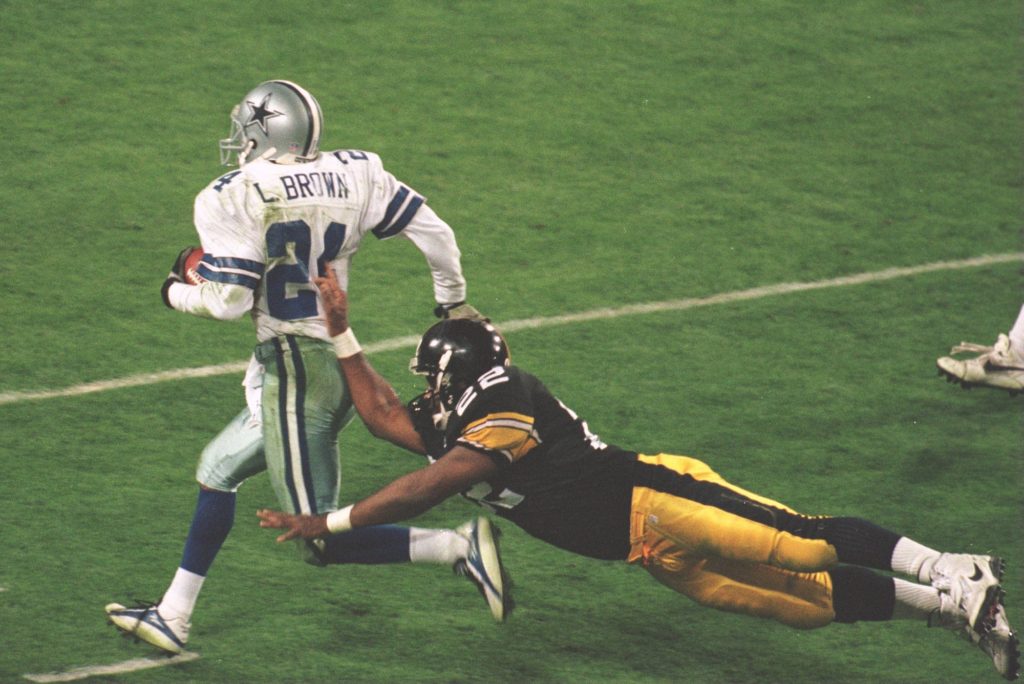 He picked off Steelers QB Neil O’Donnell twice in the second half, helping to set up touchdowns that put the game away for the Cowboys.

In fact, after each of his interceptions, both times it took the Cowboys offense only two plays to get Emmitt Smith in the endzone.

Larry Brown was a great Dallas Cowboy and holds a special place in both franchise and NFL History. Unfortunately, there’s just one more corner who outdid him for the Greatest 24 in Dallas Cowboys History, nod. 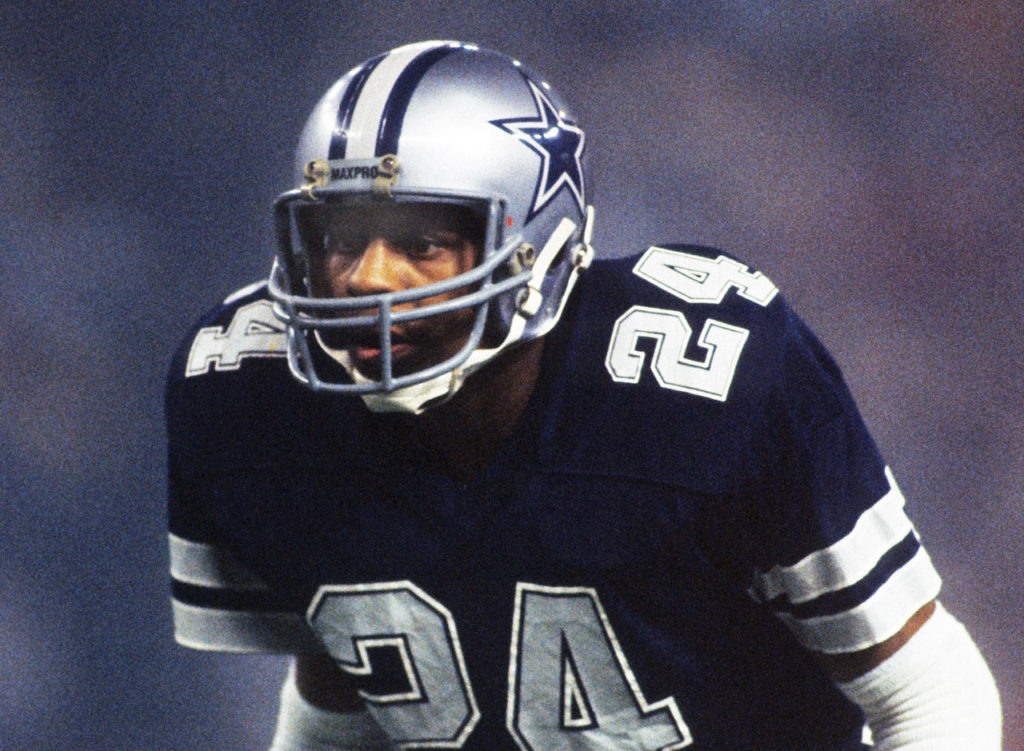 NFL scouts widely regarded Everson Walls as slow when he ran a 4.72 40-yard dash after his career at Grambling State. This caused one of the greatest cornerbacks in Dallas Cowboys franchise history to go undrafted.

Everson was born in Dallas, so fate rolled his way as his hometown Cowboys signed him and gave him a shot in 1981.

Teams may have avoided him on draft day, but Everson made himself known immediately as he led the NFL in interceptions as a rookie!

Walls hauled in 11 opposing passes as the Cowboys marched to the NFC Championship Game against the San Francisco 49ers.

The game in question resulted in one of the most iconic moments in NFL History, known forevermore as “The Catch,” when Joe Montana hit Dwight Clark over Everson Walls for the go-ahead score.

Sometimes after a stellar rookie season, players taper off. The NFL catches up to them and opposing teams target them more.

It only took seven games this time, but it was a strike-shortened season so there was less opportunity overall.

Everson Walls went to back-to-back-to-back Pro Bowls in his first three years as a cornerback in the NFL.

It is widely known that NFL corner is the most difficult position to transition into from college, so for Walls to do this so flawlessly was extraordinary. His First-Team All-Pro selection in 1983 was the cherry on top of a stout first three seasons.

Walls would lead the league in interceptions again in 1985, which made him the first player in NFL History to do so three times; Ed Reed has since done it as well.

Within the franchise of the Dallas Cowboys, Everson led the team in interceptions 5 times, which is tied for the most with Terrence Newman. 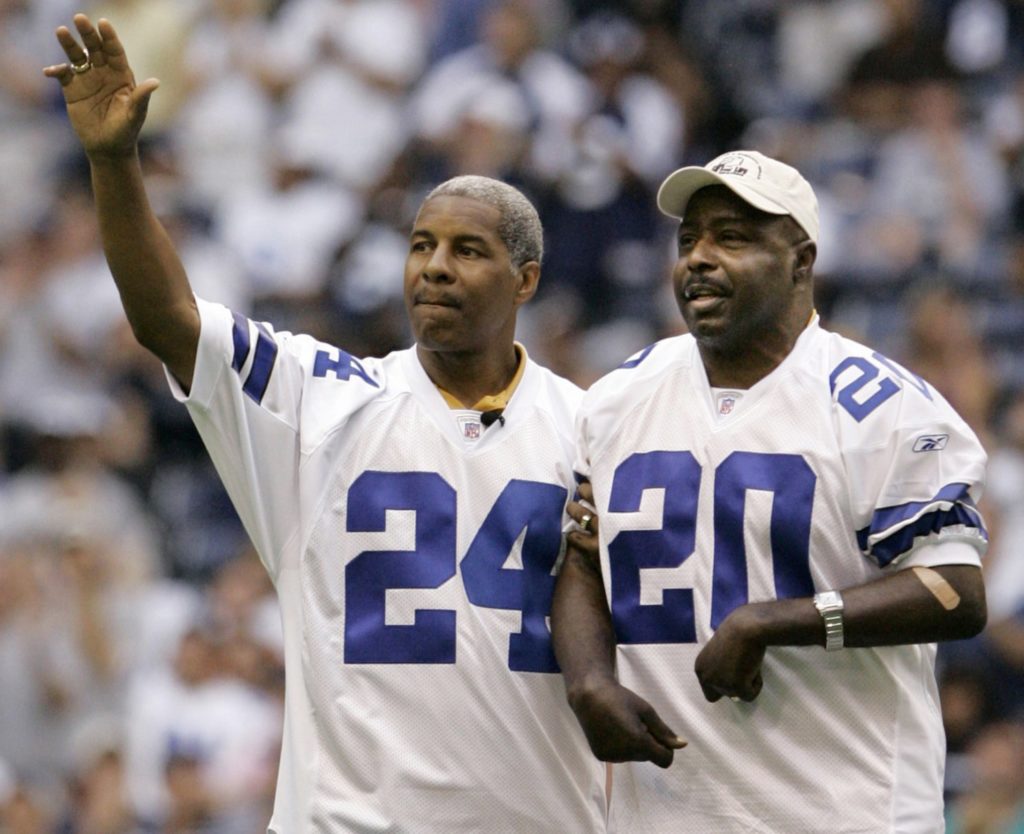 In 2004 former Dallas Cowboys running back Ron Springs’ type-2 diabetes had left him in drastic need of a new kidney. His son Shawn Springs, then starting at cornerback for the Washington Redskins, offered to give up his NFL career and volunteered his. Ron refused.

Walls volunteered his kidney to Ron and refused to take no for an answer. It was the first time that a former U.S. professional athlete had donated an organ to an ex-teammate.

The surgery went off smoothly and Ron was able to continue enjoying the beauties of life until he passed away on May 12th, 2011. 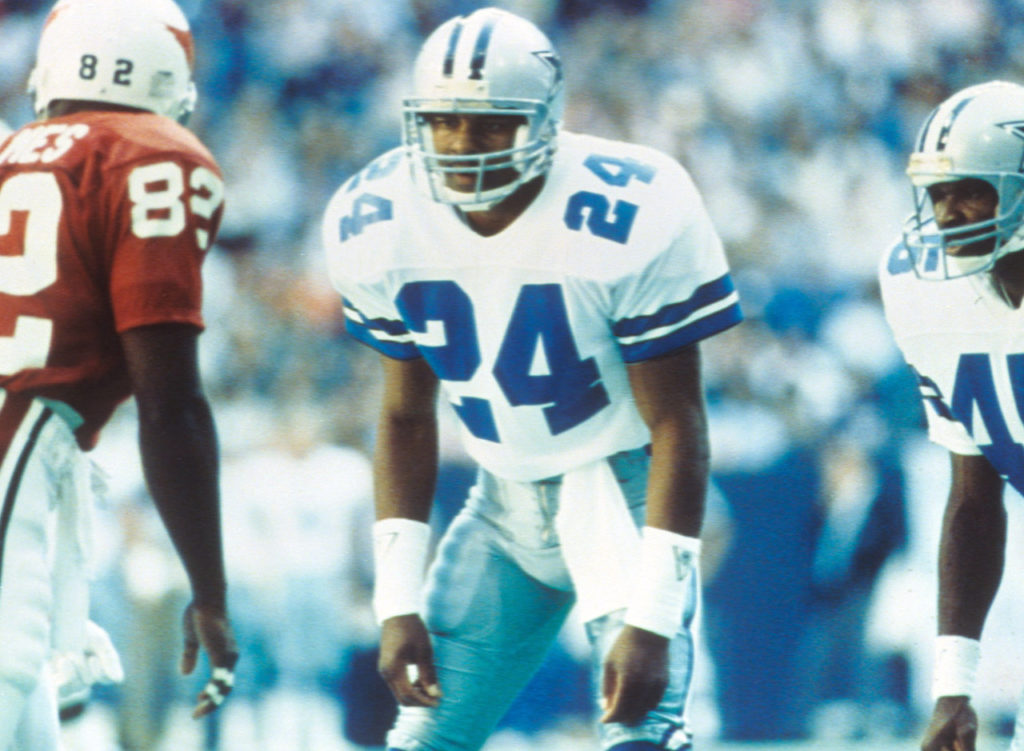 The number 24 became a nightmare for quarterbacks who had to face it under the watch of Everson Walls. Throughout the 1980s Walls was arguably the most feared cornerback in the entire NFL.

He entered the NFL with one of the biggest bangs that anyone ever has and exemplified the teammate aspect of life in everything that he ever did.

Everson Walls personified excellence both on and off the field, and he is without a doubt the Greatest 24 in Dallas Cowboys history.

Check back tomorrow to find out who the Greatest 23 in Dallas Cowboys history is!

RJ Ochoahttp://OchoLive.com
I like long walks on the beach, mystery novels, no just kidding those suck. The Dallas Cowboys were put on this earth for us all to love and appreciate. I do that 24/7/365. I also love chicken parmesan. Let's roll. @RJOchoa if you wanna shout!
Previous article
Cowboys Injuries Updates: August 20th
Next article
Finish The Fight: A Jason Garrett Mantra