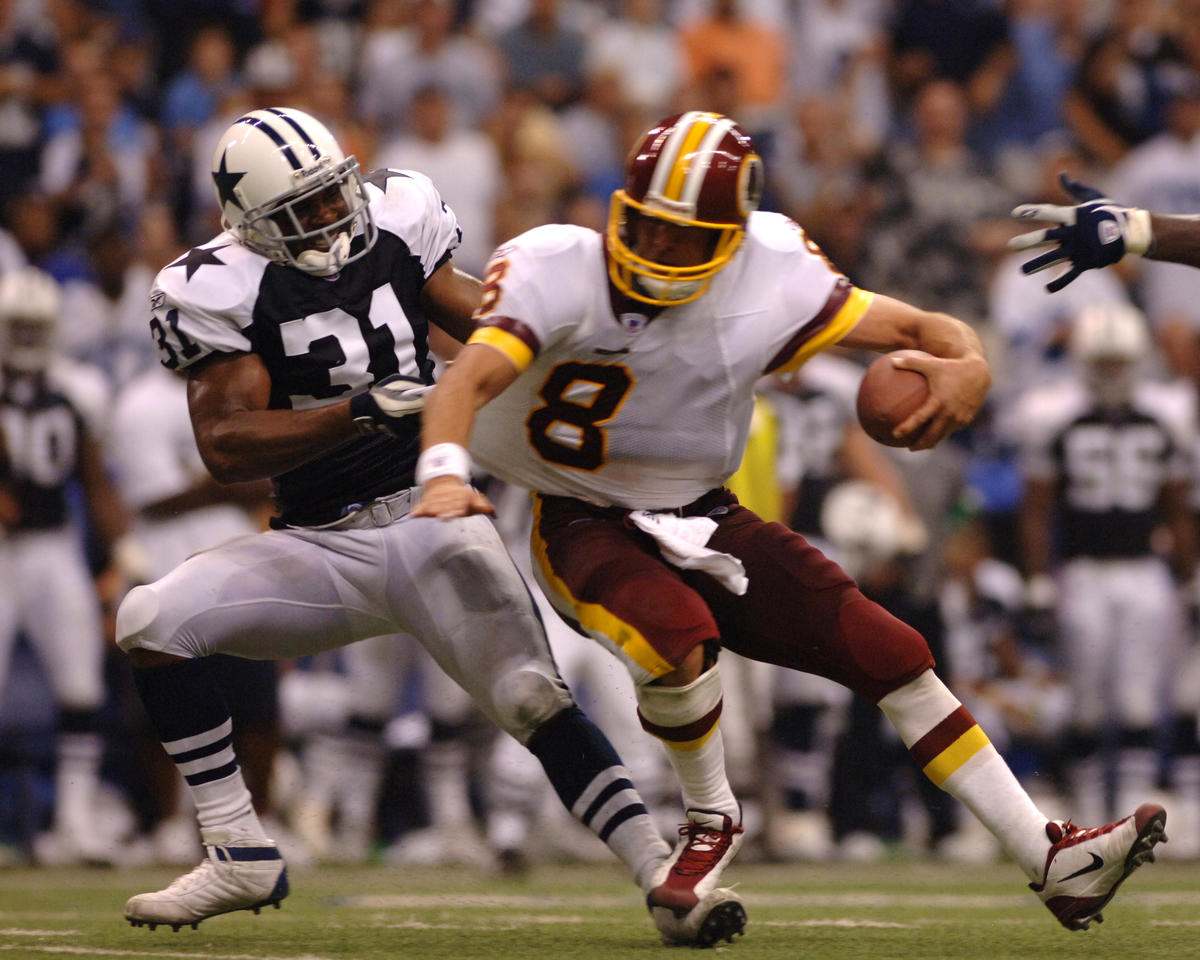 That’s right. Tonight there will be a football game played and the Dallas Cowboys will be a part of it. I just about destroyed my office because I was so excited! This must be how puppies feel when they see you after a long day.

The dog days of the offseason are over, as we will have some football to chew on after tonight. Today also puts us exactly ONE MONTH away from games that actually count! 31 days, baby. 31 days.

The current 31 of the Dallas Cowboys, Byron Jones, could probably leap that whole distance since he’s such an athletic phenomenon, but I’m going to help him out and do it for him. Throw on your Jumpman 31s with me as we stroll down memory lane in our Countdown To Kickoff Series with the Greatest 31 in Dallas Cowboys History.

The Following Players Have All Worn 31 For The Dallas Cowboys:

2002 was a fun time in the NFL. The NFL was creeping its way into the 21st century, the New England Patriots had just won the first Super Bowl of their would-be dynasty, and a band of misfits joined together to form the newest NFL franchise… the Houston Texans.

The draft saw five Miami Hurricanes taken in the first round – five! Obviously other schools were well represented, but on a bigger level so were conferences. The Big 12 had four first-round draftees, none of which would accomplish as much as the future Greatest 31 in Dallas Cowboys History.

The hard-hitting safety out of the University of Oklahoma was the first safety off of the board in 2002. He was paired with the newest member of the Dallas Cowboys Ring of Honor, Darren Woodson, in the defensive backfield.

With Williams at the free safety spot and Woodson at the strong, the Double W (say that out loud, it’s difficult) tandem made for quite the pair.

Thanks to the scheme that the Cowboys employed at the time they actually would interchange positions throughout the year, confusing their opponents.

Williams intercepted 5 passes, returning 2 of them for touchdowns, and forced 3 fumbles on his way to being the runner-up for Defensive Rookie of the Year (Julius Peppers of the Carolina Panthers won the award).

2003 saw Williams really channel his Superman persona. You see, “Superman” was a nickname given to Roy during his time in Norman thanks to his ability to patrol the line of scrimmage and fly to quarterbacks or short pass situations. He brought that energy to the Cowboys as they put together the league’s number one ranked defensive unit.

Williams found himself as a First-Team All-Pro and with a roster spot on the Pro Bowl squad. He had a great season individually, although not as great of a statistical year as his rookie season… adding to the reasoning that Roy should have won DROY the year before.

Roy Williams earned yet another nickname in 2004 when during a press conference Head Coach Bill Parcells said, in reference to his weight, that Williams was “a biscuit short of a linebacker.”

Biscuit earned some more notoriety after the 2004 season when the NFL instituted the “Roy Williams Rule.”

With an injured Darren Woodson, Williams had to play more coverage situations as opposed to down near the line of scrimmage.

He had to chase down more receivers and when tackling them accidentally brought a few down by the back of their shoulder pads.

This horse-collar tackling led to three serious injuries under the execution of Williams. One of the injuries sustained was a broken leg by a future teammate of Roy – Terrell Owens.

The NFL had seen enough of it and outlawed what many deemed the signature of Roy Williams.

The Superman Returns movie that was released in 2006 was absolute garbage, but it was freaking incredible in 2005. With the free agent signing of cornerback Anthony Henry the coverage was taken care of and Roy Williams was back on duty at the line of scrimmage. Hello, quarterbacks. Williams recorded 2.5 sacks and 3 interceptions in that 2005 season, earning his third straight Pro Bowl appearance. He would stretch his Pro Bowl streak to five full seasons before it ultimately ended.

The hard hits and tough tackles executed by Roy Williams are still being felt by their recipients today. While tearing offenses, and people, apart Roy Williams put together an illustrious Dallas Cowboy career under the banner of 31 (he switched to 38 for his final season in Dallas in 2008).

410 tackles, 19 interceptions, and 3 defensive touchdowns came from Roy Williams. He made his presence well known whether it was at the line of scrimmage, in the defensive secondary, or on top of the ball carrier after he had walloped him. Roy Williams continues that level of intensity as he makes his presence known on our Countdown To Kickoff as Roy Williams is the Greatest 31 in Dallas Cowboys History.

Check back tomorrow to find out who the Greatest 30 in Dallas Cowboys History is!

can we get a complete list of the greatest from 1-99 when u are done with this list. Of course the greatest coach is Tom Landry!

I think they held out too many players in this game !