Cowboys head coach Jason Garrett has a favorite phrase about “stacking good days on top of good days” when it comes to developing as a player and as a team. For the last two preseason games, rookie defensive end Taco Charlton has done just that.

Things didn’t start great for the 28th-overall pick, at least by some standards. The rookie was reportedly struggling in training camp and then carried that into the Hall of Fame game two weeks ago. Taco looked hapless against even backup offensive tackles, unable to shed blocks and make any real impact.

Last week, Charlton got his first sack (unofficial, of course) against the Los Angeles Rams. He also looked more generally effective in creating pressure, which carried over into last night’s game. Charlton beat the Colts’ starting left tackle to pressure to force a bad throw that should have been intercepted, but his teammates couldn’t come up with it.

This is hardly my way of saying that Taco has silenced his critics or even proven he was worth the Cowboys’ first-round pick. However, the rookie took a lot of flack for his lack of impact in the Hall of Fame game. It’s only fair to recognize his improvement in the following weeks.

Charlton is going to have a tough road with some Cowboys followers. Many wanted T.J. Watt, the pass rusher out of Wisconsin and the younger brother of J.J., who was selected just two picks later by the Pittsburgh Steelers. It doesn’t help matters that Watt had two sacks in the Steelers’ preseason opener and has already been named a starter.

Some maintain the same argument from around the draft; Watt is a 3-4 pass rusher and would not have worked for the Cowboys scheme at his size. There’s probably some validity to that, but many aren’t going to care if he’s racking up sacks and Charlton isn’t making the same kind of impact in Dallas. 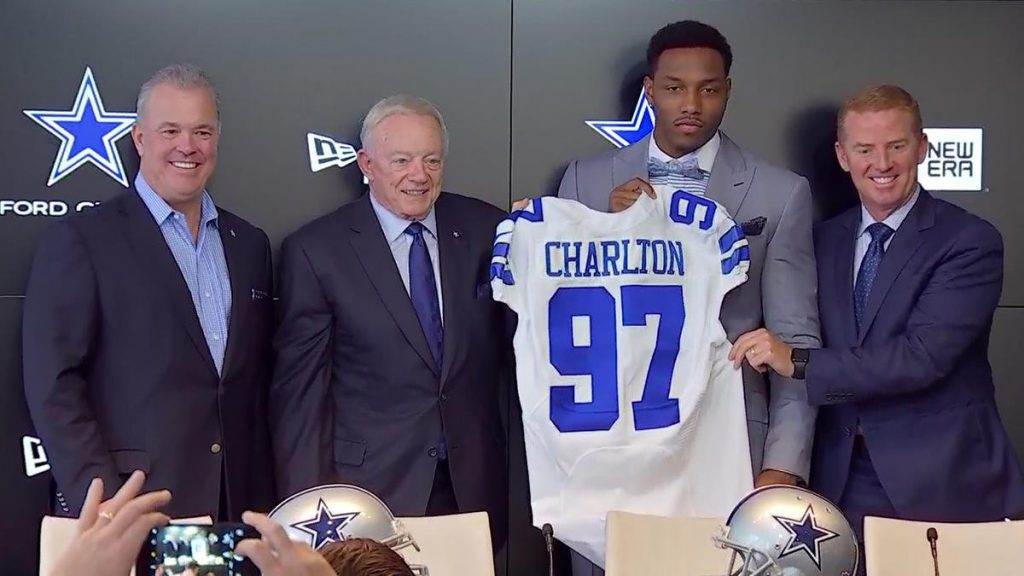 The “You drafted him instead of HIM?!” tag is a tough one for any athlete to carry. Perhaps the most famous example is from the NBA; Sam Bowie forever known as the guy the Portland Trail Blazers drafted instead of Michael Jordan. It will probably be on his tombstone.

You don’t have to too old to have seen this play out in Dallas, and even with a guy who played the same position as Taco Charlton. In 1998, Dallas notoriously passed on wide receiver Randy Moss and drafted defensive end Greg Ellis. Despite a long and productive career with the Cowboys, Ellis has never shaken the label of being the guy Dallas took instead of Moss.

Did you know that Ellis is third all-time in sacks for the Cowboys**, trailing just DeMarcus Ware and Jim Jeffcoat? He ranks 51st all-time in NFL history** with 84 career sacks, which puts him in the same company as more heralded names like Willie McGinest and Osi Umenyiora.

** This is disputable as sacks weren’t recorded until 1982, meaning many great defenders aren’t represented on these lists. Still, we work what we have. **

Obviously, Greg Ellis was never the kind of defensive end that Randy Moss was a receiver. One guy will likely make the Hall of Fame some day, and the other doesn’t have a prayer. Still, Ellis was a far better player than he’s ever been given credit for. That imbalance has largely to do with his connection to Moss.

Hopefully, Taco Charlton’s career won’t be stuck in anyone’s shadow. He may not have the opportunity to make big waves early; the Cowboys employ a heavy rotation and have DeMarcus Lawrence, David Irving, and others who could be more effective this year than the rookie. Time and patience will be needed before we see everything Taco has to offer.

At the very least, for these last two weeks, he’s been getting noticed for the right reasons. Progress is always worth appreciating.