Is This Cowboys Defender Due for a Pro-Bowl Year?

The talk of the Dallas Cowboys defense this offseason has been mostly about first round pick Taco Charlton, the return of Jaylon Smith, the revamped secondary, or the emergence of second year player Charles Tapper. One player who is quietly flying under the radar is former fourth round pick out of Minnesota, Damien Wilson.

Damien Wilson was the 127th overall pick in the 2015 draft by the Dallas Cowboys. Wilson was selected as insurance in 2015 adding yet another linebacker to the already crowded linebacker group.

Wilson had plenty of competition coming onto the team with veterans Will Smith, Kyle Wilber, Dekoda Watson, Jasper Brinkley, and Cameron Lawrence also on the roster. Damien Wilson didn't shy away from the competition, instead he showed up in training camp and the preseason games and earned his star.

His first year in the league, Damien Wilson didn't necessarily set the world on fire. He finished the season with 10 total tackles, most of which coming on special teams. Most fans will recall the overtime loss to the New Orleans Saints, in which he was a late substitution and allowed C.J. Spiller to beat him and win the game for the Saints on a blown coverage. While that wasn't one of his finer moments, Wilson was one of the better players on the Cowboys defense in the 2016 season.

After a slow start to the season, missing most of the offseason due to an eye injury, Damien Wilson came back better than ever.

Wilson finished 2016 with 27 total tackles and 0.5 sack. While serving as a primary role player in 2016 filling in for Sean Lee, Anthony Hitchens, and splitting time with Justin Durant, Wilson was fantastic against the run and was even better in pass coverage in 2016.

On Friday, ProFootballFocus.com put out a ranking of lowest quarterback rating allowed when in coverage by a linebacker, Damien Wilson was ranked third best on that list right behind Jordan Hicks, and Jamie Collins.

There are two things I really like about Damien Wilson.

First, is just that, his coverage ability. One of the hardest players to find in the NFL is a linebacker that can cover and play the run, and Damien Wilson can do both. As PFF points out, Wilson allowed a 67.5 QBR when in coverage; that is an extremely good percentage and a trait that the Cowboys' linebackers seem to lack (excluding Sean Lee).

Second, is his ability to flow sideline to sideline and work down the line without getting washed out of the play. Far too often linebackers will get washed out of a play by a tight end, pulling offensive linemen, or wide receivers; but Wilson has very good awareness of how to shed blocks, keep his feet moving and stop the ball carrier in his tracks. 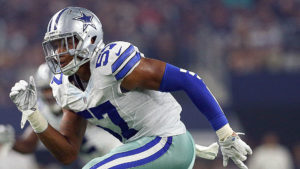 Damien Wilson has only started six games in his two years with the Cowboys, but that is mainly due to the depth the Cowboys have had at the position.

This year, that isn't the case.

The Cowboys didn't draft a linebacker with any of their nine draft picks for the first time since 2004.

Coincidence? I think not.

With Sean Lee, Anthony Hitchens, and Jaylon Smith (pending health) as the penciled in starters don't be surprised to see Damien Wilson get himself in the conversation as an opening day starter at MIKE linebacker or SAM linebacker.

Damien Wilson has been an excellent role player for the Cowboys, in an expanded role could we be looking at the chance at his first Pro-Bowl? I wouldn't be surprised one bit.