The Dallas Cowboys head into week seven of the NFL season with a 2-3 record and third place in the NFC East. Disappointing would be an understatement. Many of the team's struggles have come from the defensive side of the ball. Stopping the run, especially, has been a difficult task for Rod Marinelli's defense.

There were a few players who caught my eye in this process that I was a big fan of pre-draft. They could help this team at a few different positions on defense. 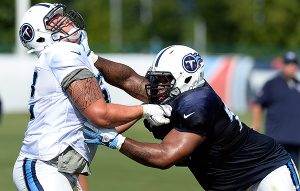 Antwaun Woods was a draft crush of mine in the 2016 NFL Draft. After going undrafted in the '16 Draft, the Tennessee Titans signed him as an undrafted free agent. He plays nose tackle in the Titans' 3-4 defense, which I think is limiting his potential.

Woods is a shorter defensive tackle at only 6-foot-0, 320lbs. but he plays with good leverage and power in his lower half. He would fit in great as a one-technique in the Cowboys' 4-3 scheme.

The Cowboys currently have Brian Price as the only true one-technique, but Woods is a much better option if you ask me. His power, explosiveness off the ball, and ability to hold up his man at the point of attack would help the Cowboys run defense immediately.

When I found Joshua Perry on the Colts' practice squad, it was a bit shocking to learn he wasn't already on an active roster. So I decided to go back and watch some film.

If you're looking for a linebacker to help stop the run, Perry is your guy.

At 6-foot-4, 254 lbs, Joshua Perry is a big bodied thumper in the middle of the field. Likely fitting in as a MIKE in the Cowboys' 4-3 scheme, he would be a good rotational linebacker who is probably a two-down player for now.

Perry has good vision, range, and instincts that allow him to make plays at the line of scrimmage and sideline to sideline.

One thing this Cowboys defense lacks is consistent tackling. Connor Harris was one of the NCAA's best tacklers at the linebacker position.

Harris isn't overly athletic, but he has a motor that doesn't stop running and a tremendous nose for the football.

Harris isn't a guy who will help much in coverage, but when it comes to stopping the run, he can help this football team as a two-down rotational player at all three linebacker spots.

Tyrone Holmes is a guy who had tons of success in college, but has also had some success in the NFL. After being drafted and released by the Jacksonville Jaguars in 2016, he ended up with the Browns and was on the 53 man roster for 11 games.

In a limited role during his rookie season, Holmes registered a sack and six tackles. The one knock on Holmes coming out of Montana was if he'd be able to hold up setting the edge and playing the run. Admittedly, that's not his strength, but rushing the passer is.

Tyrone Holmes is a weak side defensive end and the Cowboys are currently playing Tyrone Crawford–a defensive tackle–at WDE. Holmes is a quick twitch-style rusher with great explosion off the ball and the ability to bend the edge to get to the quarterback.

Currently, the Cowboys only have DeMarcus Lawrence, Damontre Moore, Benson Mayowa, Taco Charlton, and Tyrone Crawford as defensive ends, and Crawford may be making a move back to defensive tackle to help that position out. Holmes would be a good depth player and offer some juice of the edge.

Connor Livesayhttps://insidethestar.com/
Born in 1995, loved Football but more importantly the Dallas Cowboys since day one. Living in Redskins Country flying the Blue and Silver flag as high as possible. Covering the Dallas Cowboys for InsideTheStar.com and CowboysNation.com. Catch me on twitter @ConnorNFLDraft!
Previous article
Despite Record, 49ers Are No Cupcake For Cowboys
Next article
Will Green Take LG Job Back from Cooper?

I wouldn’t be surprised if the Indianapolis Colts tried to file assault charges against the Dallas Cowboys after the 54-19 beatdown on Sunday night....
Read more
Cowboys News

The Dallas Cowboys improved to 9-3 after last night's win against the Indianapolis Colts 54-19. The Cowboys scored 54 points with a 33-point explosion in...
Read more
Game Notes

Wow, what a great game. The Dallas Cowboys delivered fans with a fun game to watch as the Indianapolis Colts got destroyed 54-19. While...
Read more

This is why this defense is the way it is. Practice squad, one year deal players, etc. When will they learn that this route wont build a legit defense