Is This Cowboys Defensive End Due for a Big Year?

Ahhhhh… Training Camp is here, and football is in the air. Your 2017 Dallas Cowboys have taken the field and will begin practicing to try to repeat as NFC East Champions and return to the playoffs to potentially make a run at the Lombardi trophy.

In order to do so the pass rush has to improve, and the Cowboys' front office spent more resources this offseason trying to find that difference maker to get after the quarterback.

Cowboys Nation has very high expectations for first round pick, Taco Charlton, and Damontre Moore has been making a ton of noise this offseason, but one player who is moving along rather quietly is fourth year player, DeMarcus Lawrence. 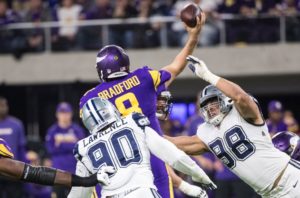 DeMarcus Lawrence is entering his fourth year with the team and is looking to finally put together a productive, and healthy season.

After the Cowboys traded up in the second round of the 2014 NFL Draft, Lawrence has played in only 32 of 48 playable games. In those 32 games, he has brought down opposing quarterbacks a total of nine times and eight of those nine total sacks came in his promising 2014 season.

There would be no argument if anyone would say Lawrence has been a disappointment so far in his short NFL career. Whether it's due to low sack numbers or because of injury, the word disappointment fairly surrounds DeMarcus Lawrence's name.

But the past is the past, and all that matters is what happens now, and for DeMarcus Lawrence good news is already coming his way.

Monday on 105.3 The Fan, Stephen Jones talked about his health entering camp.

This is fantastic news for the team heading into camp.

Now we have been lied to before so there is reason to pump the brakes just a little bit, but at this time last year Lawrence was recovering from offseason back surgery. We were also learning about the possible four game suspension that he was facing after failing a drug test.

Entering 2017 he has plenty of competition on both sides of the line. Taco Charlton, Benson Mayowa, Damontre Moore, Tyrone Crawford, and Charles Tapper will all battle for a starting spot at either defensive end position.

What does Lawrence have on his side to help him earn back is starting job?

We are still so early into training camp, so there are still plenty of questions surrounding the Dallas Cowboys pass rush, but the question still needs to be brought to our attention.

Do you think DeMarcus Lawrence will have a big season to end his rookie deal?

Connor Livesayhttps://insidethestar.com/
Born in 1995, loved Football but more importantly the Dallas Cowboys since day one. Living in Redskins Country flying the Blue and Silver flag as high as possible. Covering the Dallas Cowboys for InsideTheStar.com and CowboysNation.com. Catch me on twitter @ConnorNFLDraft!
Previous articleOff-Field Drama Likely to Ruin Training Camp
Next articleJerry Jones Defends Decision on Lucky Whitehead

We won't see anyone on the roster this year make an impact like Dak Prescott did in his return last season, but Dallas still...
Read more
Cowboys News

The Cowboys seem to have a few guiding principles in their current approach to free agency. Two of them are financial conservatism and player...
Read more