As the NFL Draft inches closer, almost all of our focus seems to have been placed on Thursday night's first round. However, we all know that making those value picks on day two and three of the draft is how championship teams tend to be built.

Considering the depth of talent this draft class possesses both in the secondary and at defensive end, the Cowboys second and third round picks will be vital to this class' future success.

Later on, I'll publish my list of potential third round targets for the Cowboys, but for now, let's take a look at some realistic options for the 60th overall pick.

Originally, I gave Tarell Basham an early third round grade, but as Draft Breakdown published more film, and more information became available to me, I moved Basham up to the second round.

Showing the ability to both win the edge and win with counter moves inside, Tarell Basham is a legit right defensive end prospect at the next level.

With his broad shoulders, long arms, and a well-proportioned frame, Basham carries his 269 pounds very well.

When at his best, Basham showed the ability to win with a quick first step, powerful rip move, and strong, active hands. He is still raw as a rusher, but his effort and motor give me a lot of reasons to be excited about the player he could develop into.

If the Cowboys decide to take a cornerback 28th overall, Tarell Basham might be the most likely EDGE to join them in round two.

My personal favorite EDGE out of this round two group, Derek Rivers, may just develop into the best of the entire bunch (besides Myles Garrett, of course).

Rivers is a disciplined, balanced, and athletic edge rusher who displays a solid pass rushing repertoire for a small school rookie. As I mentioned in my Slant Sports scouting report, Rivers' best trait is that first step quickness.

Rivers comes off the ball explosively, playing with a jet-pack on his back, especially on obvious passing downs. If your offense gets into a 3rd and long situation against Rivers, he will pin his ears back and get to the quarterback right now.

A long, physical cornerback, UCLA's Fabian Moreau may be in play for the Cowboys with the 60th overall pick. Though his 3-cone time was not all that impressive, his 4.35 40 yard dash and 136 inch broad jump were some of the best of the class.

Moreau is a fluid athlete who plays with loose hips, and solid acceleration. He showed the ability to break on the ball consistently, and is a smart corner who uses the sideline to his advantage in coverage.

With all that being said, Moreau is a raw talent in terms of his technique. Converting to corner from running back, Moreau may need a little more time to hone his coverage skills. Plus, he is coming off of a pectoral injury which may affect his draft stock. 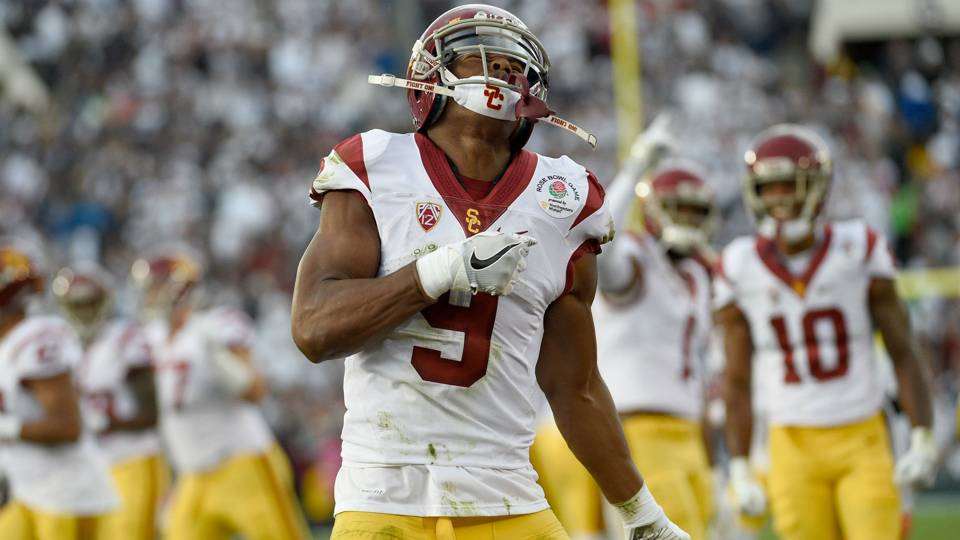 Before you burn me at the stake for suggesting a wide receiver, hear me out.

The Dallas Cowboys are going to love Juju Smith-Schuster. Considering his 6'1″ 215 pound frame, and his ability to bust zone coverage, Juju is exactly what the Cowboys value in their outside Z receivers.

Yes, they don't need to take a wide-out this high at all. And, since Dallas re-signed both Terrance Williams and Brice Butler, it would certainly be surprising if they went this route as early as round two.

But Juju Smith-Schuster is the perfect WR for the Dallas Cowboys, and if available when on the clock in round two, they might go ahead and pull that trigger.

Like Juju, Curtis Samuel would be a great addition to a Cowboys offense which already possesses some serious weaponry.

While Dallas has their work-horse back in Ezekiel Elliott, drafting his former college teammate would give the Cowboys a replacement for both Lucky Whitehead and the departed Lance Dunbar in the return game and the offense.

Kevin Bradyhttps://kevinrobertbrady.wordpress.com
Die-hard Cowboys fan from the Northeast, so you know I am here to defend the 'boys whenever necessary. Began writing for a WordPress Cowboys Blog, and have been with ITS since 2016.
Previous article
2017 Dallas Cowboys Schedule Released
Next article
NFC East Draft Preview: Team Position Needs and Draft Pick Summary