Welcome to draft day! The excitement of adding new players to the greatest football team in the universe is filling the air with its presence, as this 2017 NFL Draft class presents plenty of options for the Dallas Cowboys at positions of need like DE, S, or CB.

Coming on the clock tonight with the 28th overall pick, the Cowboys decision for most seems to be down to a ready-to-play cornerback or premier edge rusher. I ranked Dallas' pre-draft visits at defense end here, and now it is time to end this series by looking at the cornerbacks they've taken the time to know just a little bit better.

It wouldn't be the morning of the draft unless you were reading some rankings pertaining to the Cowboys, so away we go!

Note: The Cowboys did meet with Ohio State's Gareon Conley, but his recent sexual assault allegation will leave him off of this ranking as his stock with the Cowboys – or with any teams in this draft – remains an unknown.

If the Cowboys are looking for a starter that can make an impact at CB with the 28th overall pick, it will be hard to look past Washington's Kevin King – literally. At 6'3″, King uses his massive frame incredibly well in coverage and is an absolute nightmare for opposing WRs to gain separation on.

In this deep class of cornerbacks, King has a real chance of lasting until late in the first round, where the Cowboys will also love his knack for getting his hands on the ball and creating turnovers.

Out of the 11 cornerbacks the Cowboys met with, and 10 we'll rank here, I expect Kevin King to top the board.

The Cowboys interest in Adoree Jackson is reportedly high, which worries me personally due to his floor as a cornerback prospect. Still new to the CB position, Jackson uses his elite speed and acceleration to his advantage in coverage, but lacks the refined technical skills to hold up snap-to-snap in the NFL.

Should Kevin King be off the board, I can still see the Cowboys liking Jackson as their second best option at cornerback in the first round, especially once you factor in his ability to contribute on offense and special teams. With some intense coaching, Jackson can become a steal on the defensive side of the ball with a ready-made set of skills to translate into kick and punt return opportunities along with offensive touches currently being taken by Lucky Whitehead.

Adoree Jackson is most definitely a name to know for Dallas in this draft.

Getting back to cornerback prospects with high floors to start on day one, which is something the Cowboys desperately need, Quincy Wilson is exactly that out of a talented Florida Gators secondary featuring multiple NFL talents.

While Wilson may not “wow” anybody with one clear-cut strength, he is an all-around solid athlete that diagnoses plays quickly and stays a step ahead in coverage thanks to his strong arms that allow Quincy to reroute his targets.

Wilson was exposed to a lot of different coverages as a Gator, reacting to all of them with the competitive spirit that could see him come off the board well before the 28th overall pick. Should he be available, the decision between him and Adoree Jackson would be simple for me but probably quite difficult at The Star.

Once thought of as a perfect fit for the Cowboys in the first round, Fabian Moreau's draft stock has become more of an unknown entering this draft. Injured at his pro day, Moreau will have a chance to fully recover and showcase his absolutely effortless coverage abilities in the NFL this season, but long-term questions about his durability remain.

A smaller, lighter frame, Moreau may be a guy the Cowboys end up in a tough spot to grab as he'll be hard to pull the trigger on at 28th overall but may not last until the 60th overall pick in the second round.

With that said, coming in just behind Quincy Wilson is not a bad spot to be for Fabian Moreau on this list.

If scouting just a cutup of Cordrea playing in press-man coverage, you would call me crazy for labeling him as a second round talent, but a closer look at his abilities fails to hide a player that looks entirely lost when he can't bully the WR at the line.

The Cowboys aren't known to play a ton of press coverage, but could be shifting that way with a new-look secondary, and would love to see Tankersley remain on the board at pick #60.

Here is where the NFL Draft gets frustrating from an analyst/fan perspective. Florida's Teez Tabor is one of my favorite players in this draft, and would be an easy consideration for me as high as the 28th pick for the Cowboys.

Since I don't work at The Star and instead at a dorm room from Montclair State University, I think Tabor's well below average speed and physical limitations will greatly affect his stock in Dallas.

Whether or not he lasts through most of the second round will depend on how many other teams share the Cowboys mindset in projecting Tabor physically at the next level, where we can find out just how interested Dallas is in his services as a terrific cover corner that isn't afraid to throw his body around.

I already mentioned that Gareon Conley will not be ranked in this list, and in my final mock draft before tonight I actually substituted Awuzie in his spot for the Miami Dolphins.

For the Cowboys, I can't see Chidobie Awuzie ranking any higher than seventh on their stack of cornerbacks due to his relatively high ceiling but low floor. A gambler on too many routes, Awuzie can play with sloppy technique at times and lacks awareness with his back turned to the ball.

He'll likely also be in a tough spot for the Cowboys to grab, and I think they're fine with that. 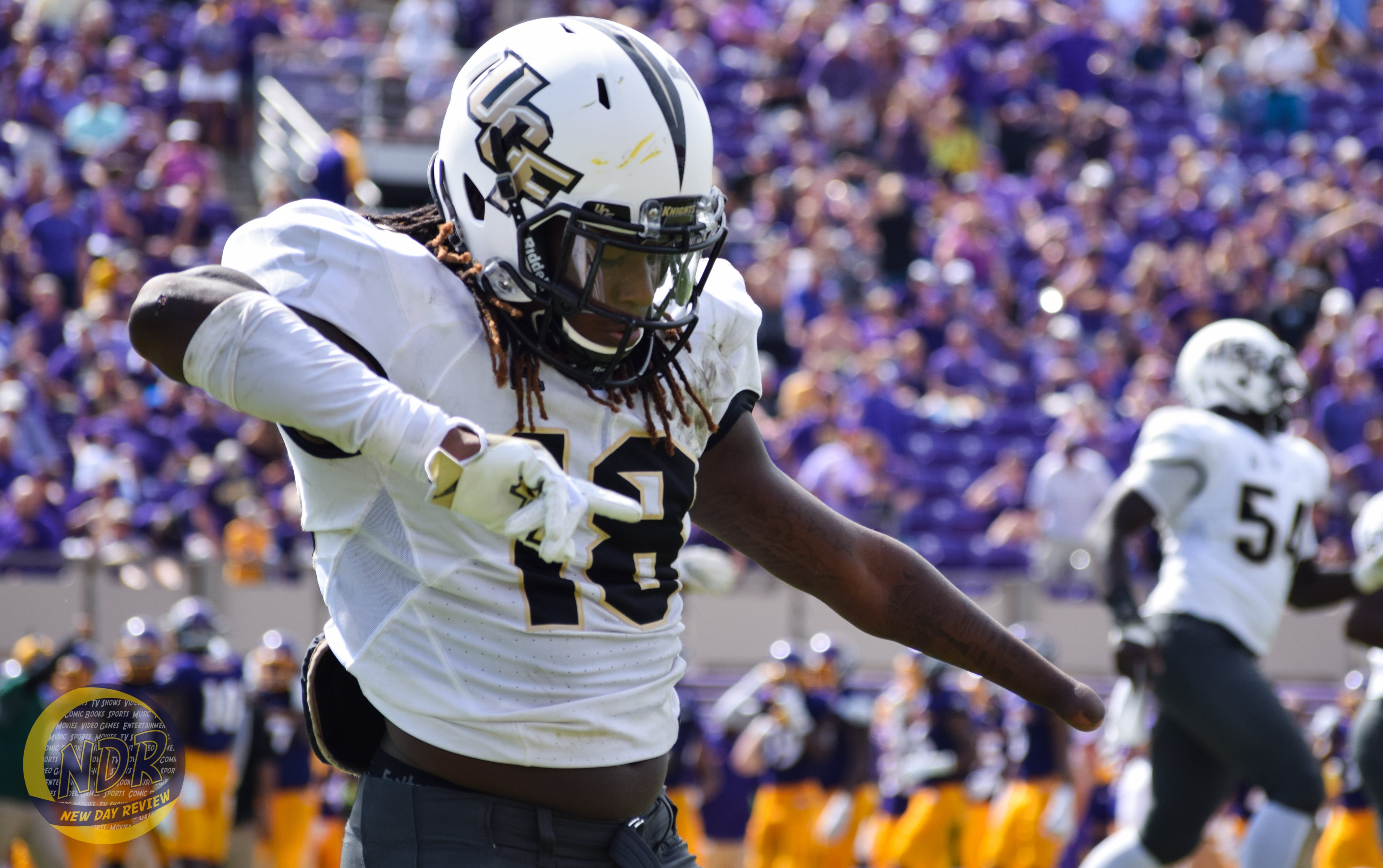 Moving into later round cornerbacks for the Cowboys to target in this deep class, UCF's Shaqil Griffin is another all-around player that contests passes at the catch point using his long arms and range with quick feet to mirror receivers.

Griffin is comfortable in nearly any coverage, but does lack the top-end speed to get back into plays once receivers gain a step against him. With plenty of upside, Griffin could be a great add to Dallas' secondary in the third or fourth round.

Another late-round target with upside and traits for the Cowboys to take advantage of, Kazee (like Treston Decoud who comes in next on this list) ended up with Dallas in my final seven round projection.

Not nearly as consistent as the players above him here at reading routes and reacting in time to break up passes, Kazee does show off the quick footwork to turn and run with bigger receivers along with the balance to stay on top of quicker, underneath routes against smaller targets.

There comes a point in every draft where teams begin to select players simply because  they have some of the traits needed to develop in the NFL. For Oregon State's Treston Decoud, this trait is his speed as he's been mocked by myself to the Cowboys twice.

Decoud looks the part of a starting NFL cornerback with 33″ inch arms and the fluent speed to go with it, but will fall for far too many fakes at the line of scrimmage with limited recovery skills.

As a boundary defender, Decoud will get pushed around for his size and struggles to generate any power in driving back to the football in off coverage.

If the Cowboys follow this ranking though, and land a CB as early as we all expect them to, Decoud would not have to start early in his NFL career – helping him develop his game into a body that is fit for a starting cornerback in this league.

Cornerback is going to be one of the positions to keep the closest eye on for the Dallas Cowboys in this draft, as will defensive end and safety. Hopefully these rankings of players the Cowboys have already committed some time to helps in understanding their mindset of who can be targeted in what round.

When it comes to these cornerbacks, there is no doubt that they've visited with some prospects that will have their name called tonight. Will that call come from America's Team?