If you’re cramming for the 2017 NFL Draft like I am for finals, you likely already know that you can sound smart in any Cowboys circle by simply bringing up Dallas’ need at defensive end. Some of the top names in this draft class are pass rushers, with Texas A&M DE Myles Garrett expected to be the first overall pick.

Our Staff Writer Kevin Brady has done a great job breaking down the defensive end talent that could be available for the Cowboys with the 28th overall pick, first by hypothetically constructing their board at the position and more recently narrowing the talent pool at DE down to four players.

While this ranking will cover more than four players, it will not include defensive ends that the Cowboys have not had pre-draft visits with – a solid indication of their interest in a prospect.

It’s not just draft season, it is the week of Football Christmas. Let’s rank some players. 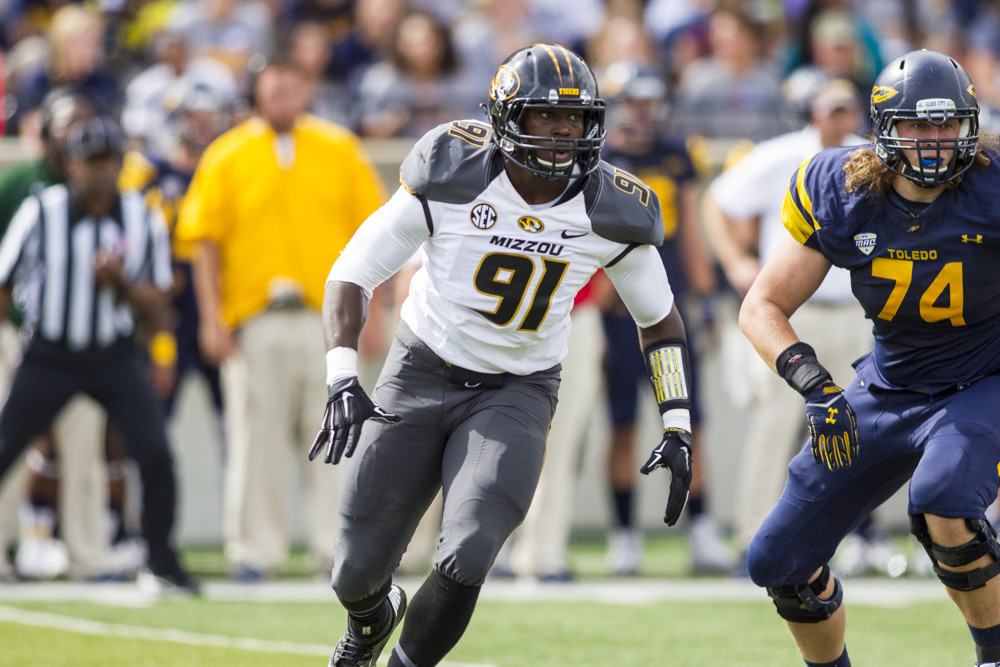 The Dallas Cowboys’ connection to Charles Harris has been one of the more sustained team-prospect links over this draft process. Missouri has produced waves of talented pass rushers at the next level, and their latest in Charles Harris is almost perfectly built for Rod Marinelli’s scheme at RDE.

With a go-to spin move that Harris can win on day one with along with a violent inside counter, the impact Charles Harris can have off the weak side edge in Dallas is clear-cut – with room to grow as an all-around defender.

Harris’ ability to be a feared pass rusher with the Cowboys at the position they’ll need him the most puts him at the top of my pre-draft DE rankings.

Is Michigan State’s Malik McDowell Worth the Risk for Dallas?

When he wants to be, Malik McDowell is a top player in this class that has no business even being discussed with the 28th overall pick. His inconsistent effort at Michigan State however – which has been tied to the team’s overall lack of success, injuries to McDowell, and even reports that he played through late growing pains in 2016 – has put him right in the middle of the Cowboys’ consideration.

McDowell, if motivated the right way by defensive line guru Rod Marinelli, could quickly become the steal of this draft for the Cowboys. From the moment he steps on the field, Malik can play as an athletic RDE, disruptive 3T DT, and immensely strong LDE.

Part of the reason I also think the Cowboys are in a good position to tap into McDowell’s elite potential is that their current starter at 3T DT, second-year player Maliek Collins, appears to already be slotted in to McDowell’s best position for some time. Malik would have to earn his snaps in Dallas, but if he does, you’ll never see him leave the field.

While Harris’ buzz with America’s Team has been ongoing, the recent push for T.J. Watt by Cowboys Nation has been deafening. First and foremost, yes, Watt is the younger brother of Houston Texans DE J.J. Watt.

In only one full-year on the defensive side of the ball, Watt flashed all the traits to be a quick-developing sack master in the NFL at Wisconsin – recruited originally by the Badgers as a TE and missing all of 2014 and parts of 2015 with separate knee surgeries.

If the Cowboys can put his injury history behind them, there is no doubt that T.J. Watt will be high on their list of pass rushing targets in the first round as – like Harris – he can make a difference on the edge with his quickness and power to work underneath offensive tackles on day one while developing even further as a defensive end. 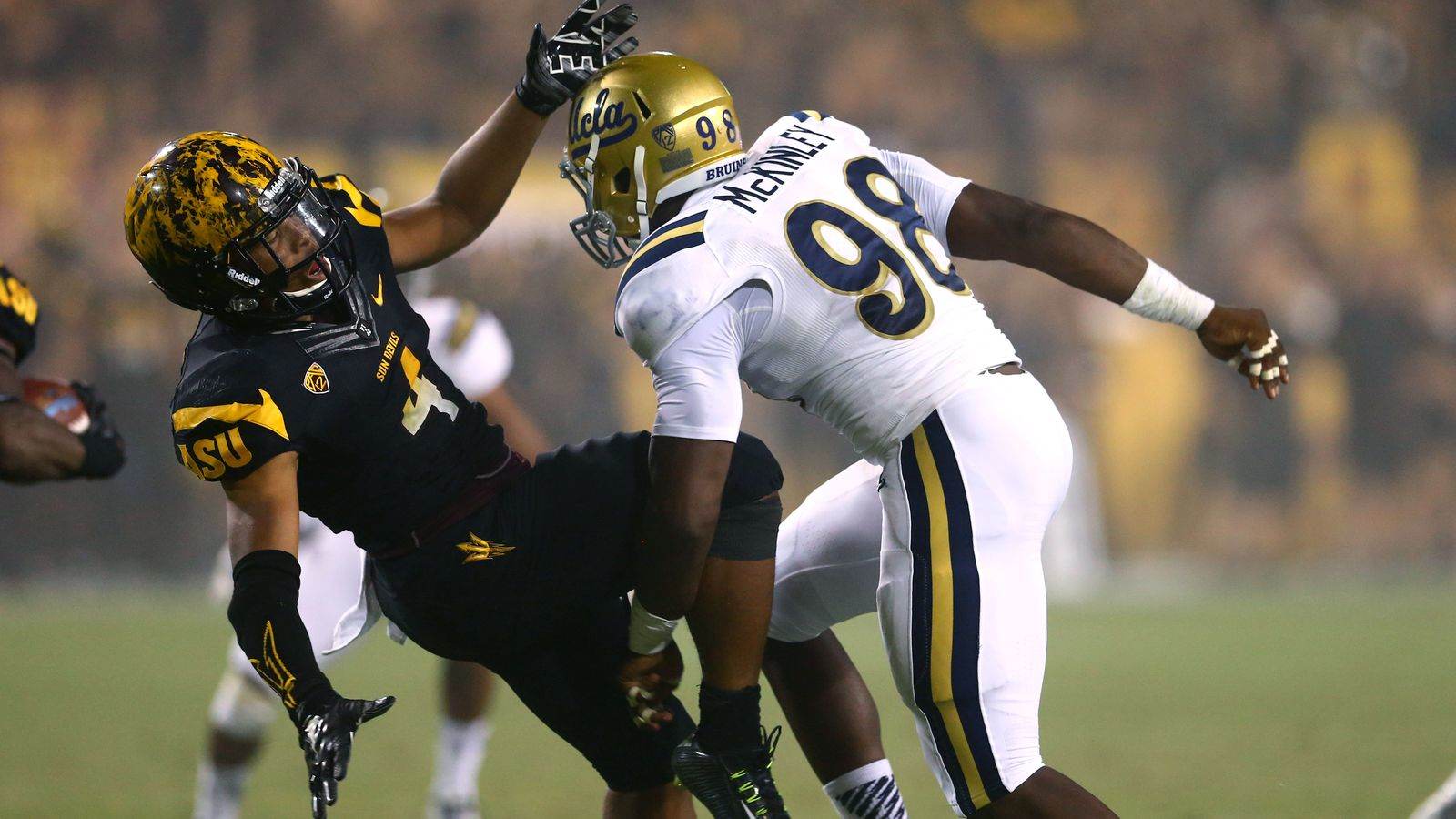 Another talented and budding pass rusher that the Cowboys have shown interest in is UCLA’s Takk McKinley. Jerry Jones’ “war daddy” remark has help up through this draft process in Dallas’ search for a feared pass rusher, as has his all-important note that the Cowboys can’t be afraid to take some reasonable risks in adding an impact defensive end.

Takk McKinley’s shoulder injury may cause him to miss some time through his first training camp, but in the long run he is one of the most explosive players in this deep DE pool off of both edges.

Capable of winning the corner and finishing off the right edge or patiently reading the run on the strong side, McKinley slides into these pre-draft rankings just behind three ready-to-go players in Charles Harris, Malik McDowell, and T.J. Watt.

Derek Barnett’s draft profile was one of the first I wrote to begin this long 2017 draft process. While I personally love the player, I believe the Cowboys view him as a solid left end – hurting his stock in Dallas’ pursuit of their first true feared right end since DeMarcus Ware.

With that said, I also think the gap on this hypothetical board between McKinley and Barnett is razor-thin. McKinley will have a better chance to last until the 28th overall pick as well, as Barnett has all of the traits along with the production in breaking Reggie White’s sack record at Tennessee to be long gone in the top 15 picks.

The Cowboys should be fortunate to even find themselves in position to pass on Derek Barnett on Thursday, but I believe they would for any of the players listed above.

If Derek Barnett is a left defensive end on the Dallas Cowboys’ board that can flex to the right side, Taco Charlton is a true left end that can excel in an area the Cowboys are already pretty well-covered at for his position.

Despite looking the part, Charlton is limited as a pass rusher and leaves a lot of plays on the field off the edge as he’ll either struggle to snap the corner or generate enough power to shed his block and run to the ball with high pad level.

A very solid option against the run, Charlton falls behind five other pass rushers on this list, making it hard to imagine a scenario where he is indeed the pick at 28th overall.

Unlike any other defensive end on this list, Ohio’s Tarell Basham is a target the Cowboys could see in the second round. Generating some buzz from other teams at the back end of the first round, Basham may be the perfect player to trade down for and gain more picks in the Cowboys war room.

A small-school prospect that has managed to generate some well deserved hype, Basham can also play off of both edges with a consistent get off to capture the corner. Tarell Basham excels at using his long arms to generate power and push into the backfield before shedding and finishing at the football with consistency.

Basham may not be a day one “war daddy” in the NFL, but he would be a great start to a Cowboys draft that includes gaining extra picks to use towards the defense while trading down for his services at DE.

The best case scenario for the Cowboys landing Kpassagnon in this draft is if they’ve already landed one of the seven players ranked above. Kpassagnon has some intriguing traits to warrant a later round pick, but his glaring inconsistency on the edge paired with the concerns that come with Villanova’s level of competition take him out of consideration to really “move the needle” when it comes to Dallas getting to the quarterback anytime soon.

Relying on sheer strength and power with some rarely seen bend, Kpassagnon allows tackles to get his hands inside and steer him out of plays too often. If he continues to develop with his consistent pad level and increasing strength, Kpassagnon can find NFL snaps – but it won’t be as anyone opposing offensive coordinators lose sleep over while preparing to face the Cowboys.

This is how I see the Cowboys ultimately ranking the eight defensive ends they have gotten to know better than the rest with pre-draft visits. Unlike the rankings for these three safety prospects, you see that Will McClay and the Dallas brass is more committed to addressing the need for a pass rusher early in this draft.

The real fun will begin as some of these players inevitably come off the board before pick #28, playing us into a situation where we can find out once and for all how this team has some of these edge players graded – potentially opting to look at a first round CB or S.

One thing is pretty certain when looking over the Cowboys full list of pre-draft visits, and it is that Dallas is all-in on upgrading defensively. Part of this plan could very well include one of the above pass rushers.

Tell us what you think about “Cowboys Draft: Ranking Dallas’ Pre-Draft Visits at Defensive End” in the comments below. You can also email me at Sean.Martin@InsideTheStar.com, or Tweet to me at @SeanMartinNFL!