Going into the 2017 NFL Draft, it is clear the Dallas Cowboys must address both the front and back ends of their defensive unit.

Losing key contributors to their secondary of 2016, both cornerback and safety have become more serious needs over the past few months, passing defensive end as the team’s most pressing need in many people’s minds.

Still, drafting a true EDGE still remains a priority, and one it appears the Cowboys will look to do with their 28th overall selection.

Based both on the depth of this year’s cornerback class and the players which the Cowboys have had in for pre-draft visits, it seems that a defensive end will be targeted in the first round, and the secondary will be addressed on day two.

While this strategy seems to make sense this year, history actually suggests that with a late first round pick, the Cowboys may have better luck looking to the secondary first. 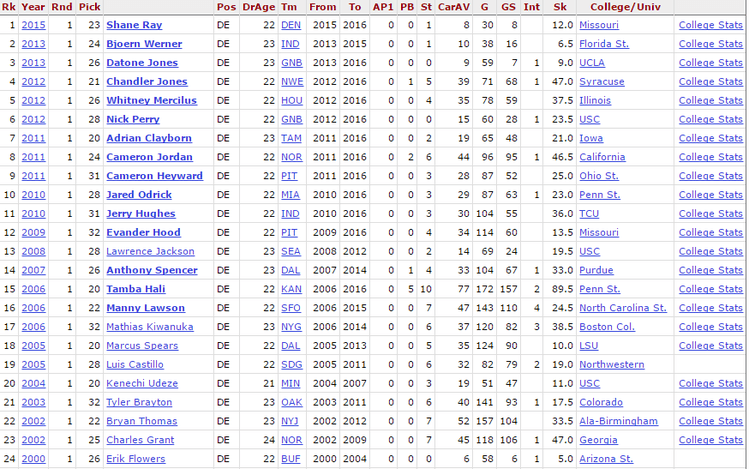 What I came up with were these two lists, and a pretty clear answer of what history would suggest the Cowboys do in round one.

On the defensive end list, we see some interesting names. High caliber players such as Chandler Jones, Nick Perry, Whitney Mercilus, and Cameron Jordan top the list while draft misses such as Jared Odrick, Evander Hood, and Kenechi Udeze bring the quality down.

Still, it is a solid group, and if the Cowboys can get the ceiling of a Tamba Hali at 28, I’m sure we would all be ecstatic.

Regardless, the list is still a bit hit or miss. While the highs are certainly high, there are too many lows for me to get too excited about this group as a whole. 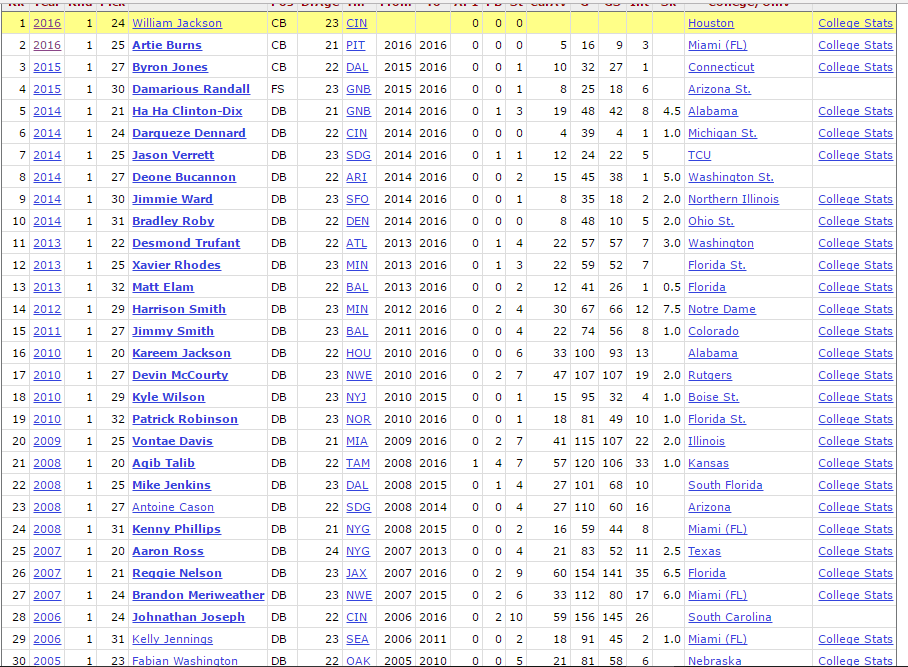 Now, on to the defensive backs.

Once again, there are a few misses in this group, but I actually believe it is a more steady bunch than that of the defensive ends. Sure, the defensive end group had high ceiling guys like Tamba Hali and Chandler Jones, but it also featured some serious “busts” which the Cowboys cannot afford to gamble on with their current roster.

The defensive backfield, however, is much more consistent at the end of round one. In my opinion, at least.

Players like Aqib Talib, Jonathan Joseph, Desmond Trufant, Vontae Davis, and Xavier Rhodes would all be welcomed additions to the Cowboys with the 28th overall pick this year, if they were incoming rookies.

My point is, cornerbacks taken towards the end of round one seem to be more consistently good pros than defensive ends who are taken in similar spots. Of course, the demand for edge rushers early in the draft is a key reason for this, as second round talents get pushed to the back end of round one due to the importance of line of scrimmage defenders in the NFL.

But, no matter what “history” says to do, the Cowboys need to just stick to their board and make whatever pick they feel is best.

No two draft classes are the same, and if the Cowboys believe that their late first round defensive end target will be Tamba Hali and not Jared Odrick, then I have the trust in them to make that selection.

Regardless, it is going to be a fun draft weekend.