The Cowboys first loss of the season was a tale of two halves, as Joseph Randle and Brandon Weeden both impressed en route to a 28-17 lead at the break. Weeden carried his consecutive completions total to 22, setting the Cowboys franchise record, before having it snapped on an interception.

Randle ran for three first-half touchdowns, tying his mark from all of last season. However, just before the half, it was Falcons running back Devonta Freeman who would begin to make his impact.

His 35-yard catch and run set up a field goal to send the Falcons to the locker room trailing by 11. This was all the added momentum they would need, as Freeman and Julio Jones led the team back quickly in the second half.

The Falcons would cut the lead to three on their second possession of the third quarter when Julio Jones got loose for a 45-yard score. A blown coverage on the ensuing two-point conversion would make the score 28-25 Dallas.

Weeden and the Cowboys needed to sustain drives to keep this potent Falcons offense off the field, and they were unable to do so. Four second-half possessions resulted in four punts.

Chris Jones' second punt of the half was fair caught by Eric Weems at the 11. This is where Matt Ryan would take over, leading the drive that gave the Falcons the lead for good.

Devonta Freeman led a six-minute march, rushing for 30 yards on the drive – including the seven-yard touchdown to make the score 32-28.

Rookie Vic Beasley would drag down Weeden on a third down on the following drive, forcing another very quick Cowboys' punt. Matt Ryan once again took advantage, this time finding Julio Jones for his third touchdown.

Terrance Williams was all but invisible, recording just two receptions and dropping the pass on fourth down that sealed the game for the Falcons.

Freeman finished with 141 yards on 30 carries, and the three touchdowns.

Atlanta has now gone 3-0 by beating the Eagles, Giants and Cowboys. The Cowboys next head to the Superdome to face the New Orleans Saints on Sunday Night Football. 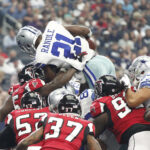