Could The Cowboys Keep 6 Wide Receivers?

Before Terrance Williams signed a new four-year contract this year, it seemed like wide receiver was a top need for the Cowboys. Fortunately, he surprised us all by staying in Dallas. Brice Butler had already signed a one year deal with the team, and the Cowboys drafted rookies Ryan Switzer and Noah Brown in the NFL Draft. So it is fair to say, things are looking good for this position in Dallas.

But, what will the WR group look like when all the roster cuts have been made? If you read my weekly Spanish series, you may have read my roster projection. In it I had six spots taken by wide receivers.

Bryant, Williams, Beasley and Switzer are guaranteed. The first three for obvious reasons, and Ryan Switzer was a fourth round pick so it's safe to say he'll make the roster.

I don't see Lucky Whitehead making the roster though. Switzer will be this team's returner and I am sure he'll run jet sweeps if he is asked to. The only difference will be that he'll catch the ball too!

Supposing Lucky is cut, Noah Brown and Brice Butler will fight for a spot. If Noah Brown ends up being the steal a lot of scouts and analysts think he was, the Cowboys would have to decide between these two.

Butler did a decent job replacing an injured Dez Bryant as the team's “X” receiver last season, so I would argue that he is a legitimate contender for the final spot.

The Cowboys will need to decide between options A and B. Or, they could go with option C and keep both. However, going long in a certain position means going short on others.  The question becomes…

Where will the sixth spot come from?

Here are the three most likely options, in my opinion.

Tight end: Instead of carrying four tight ends, it is likely to see the team going ahead with just three. Who will back up veteran Jason Witten? The Cowboys seem to be confident in Rico Gathers seeing the field this year and Geoff Swaim did a good job before suffering an injury last season.

Then there's James Hanna, who was never active during the 2016 season. Besides, he wouldn't be a tough cut to make. I wouldn't be surprised if the team moves on with just three TEs and says goodbye to Hanna. 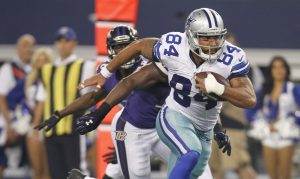 Offensive line: There is no doubt that the Dallas Cowboys offensive line is the strongest unit on the team. They'll probably keep nine offensive linemen when the season begins. But, with La'el Collins getting some snaps at right tackle, it is possible they decide to go short here; carry eight players instead of nine.

If Collins starts at RT, that would likely mean Jonathan Cooper starts at left guard, meaning that Chaz Green and Emmett Cleary would be on the bench.

Byron Bell would have a tough task in front of him to earn a roster spot if this is the case. If he is cut, there's a higher chance of seeing both Noah Brown and Brice Butler wear the Star this year. 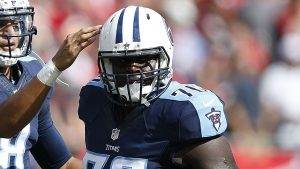 Linebacker: This is probably the least probable of the three. Suppose Jaylon Smith's health is better than good and the Cowboys can confidently count on him to play without a problem. If this is the case I can see the Cowboys going short at LB with just six guys.

It all hinges on Smith to try to determine how the linebacker group will look next season, but I'll take the optimistic route for now.

Would you like to see both Butler and Brown on the team next season?

Let us know in the comments below, or tweet me @PepoR99 and let’s talk football! If you like football and are looking for a Dallas Cowboys show in Spanish, don’t miss my weekly  live show Primero Cowboys!

Mauricio Rodriguezhttps://www.facebook.com/PrimeroCowboys/
I love to write, I love football and I love the Dallas Cowboys. I've been rooting for America's team all the way from Mexico ever since I can remember. If you want to talk football, I'm in... You'll find me at @MauNFL.
Previous articleWATCH: Cowboys Teammates Rico Gathers And Ezekiel Elliott Dominate Basketball Court
Next articleCowboys Release 3 UDFAs, Sign DE Darnell Leslie and TE MJ McFarland

I think Noah Brown takes over for Butlar and Butlar is cut, Butlar missed very catch able balls, and those are just inexcusable

That would make sense, of course. If Noah Brown stays Butler is gone.

I’m sorry Mauricio but saying Butler did a decent job replacing Dez Bryant is a joke! I am tired of people trying to defend Butler. In the last two seasons he has caught 28 balls on 60 targets. By no standard is that decent. It is a cuttable number. He has concentration lapses, and poor hands. He looks good on the hoof and has great size and speed but in 4 years in the NFL we still talk about his potential. I’m not saying he is going to wash out of the league but I feel almost certain Noah Brown can eclipse that. Please, please give Butler his pink slip!

Hey Randy! Dropped passes was of course his biggest issue. And while I understand he is very cuttable, he did do a better job than 83 in 2015, at least in my opinion. I like T-Will of course, but not as an X receiver.
While he is not good, he may be the only backup able to be an X receiver, even if he is not a good one.

I am certainly not an advocate of T-Will either but he is better than Butler. in 2015, Twill caught 52 of 93 targets for 56% and 3 TD’s. In 2015, Butler caught 12 of 26 for 46% and no TD’s. There is nothing about those numbers that says he is better than Twill. And the contract Twill got over Butler clearly shows the FO likes Twill better. In two seasons in Oakland when they were starving to find receivers, Butler could not win a job and they had nobody at that time. Honestly there is no argument for keeping Butler that has merit other than he is a good team guy. I like him personally but would like him better on somebody else’s team!

You don’t carry 6 Receivers just to do it. Brown and Switzer were drafted to replace Whitehead and Butler You carry 5 as usual and keep Andy Jones on the practice squad unless he does something spectacular in preseason

If they carry the six it wouldn’t be “just do it” though. Let’s not forget that, even if he is thought of as a steal, Brown is still a seventh round pick. Even though I don’t think it is the most probable thing to happen, it’s still an interesting outcome to think about. I wouldn’t mind keeping the five as you say though, that is very likely to happen. Let’s hope Brown is a steal.