After four years as the NFL Vice President of Officiating, Blandino has taken a job in television and will no longer be the one trying to defend referee errors after games. With controversial calls impacting Dallas' last two playoff games, Blandino became a four-letter word among Cowboys Nation. The change is certainly welcome.

While not yet confirmed which network Blandino will be working for, this tweet from Bleacher Report's Mike Freeman suggests he and Tony Romo may be co-workers soon:

During Super Bowl week, was told Dean Blandino was leaving for CBS. CBS said not true. But it's clear Blandino has been trying to get out.

It's likely that Blandino's job with CBS, or whichever other network he's been hired by, will be similar to the role that Mike Pereira currently holds with FOX as their chief officiating consultant. Broadcast teams will go to Pereira during games to clarify rulings or simply to get his opinion on a controversial call. Pereira held the NFL V.P. of Officiating job from 2004-2009.

Dean Blandino leaves behind a checked history in a very difficult position. Perhaps his most challenging days were in connection with the Dallas Cowboys. Here are the three major incidents between Blandino and Dallas. 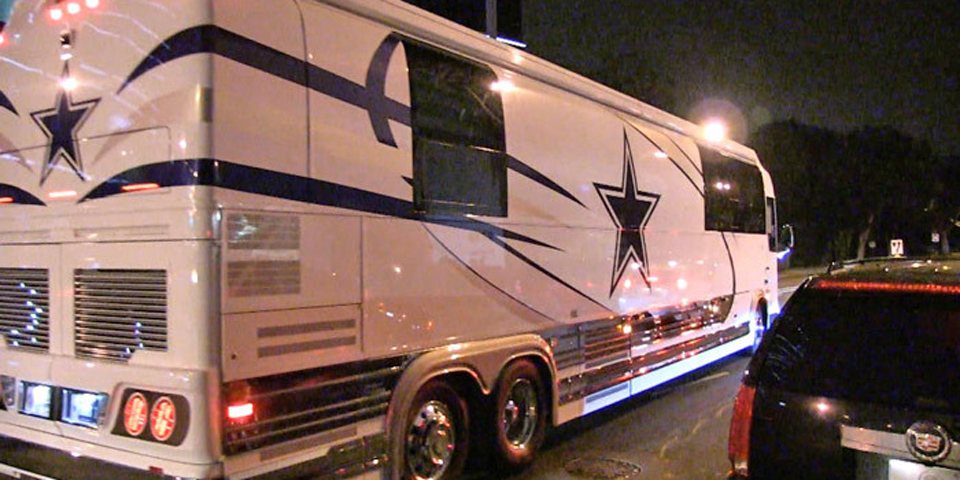 In August 2014, TMZ captured a nighttime photo of Dean Blandino stepping off the Cowboys “party bus” along with Cowboys executive Stephen Jones. It was clear that the two, along with some female companions and others, were having a fun time. Given Blandino's position as the head of officiating, this raised eyebrows and ire throughout the NFL.

The appearance of potential favoritism came back around in the 2014 playoffs when Dallas received an important, favorable call in their playoff win against the Detroit Lions. Linebacker Anthony Hitchens was called for pass interference while covering tight end Brandon Pettigrew, but the calls was then reversed.

While the replay clearly shows that Pettigrew initiated contact and actually pulled Hitchens by the facemask, many still felt the call should've stood. When Dean Blandino had to defend the referees' decision after the game, the party bus incident came back into light. He even had to address it specifically when denying any sort of bias towards the Cowboys.

That incident and its subsequent fallout have been blamed, by some, for what happened the following week in Dallas' next playoff game in Green Bay.

As any Cowboys fan is painfully aware of, a catch by Dez Bryant near the goal line was ruled incomplete in the Divisional Round of the 2014 playoffs as Dallas visited the Packers. Bryant seemed to complete the catch and then dive toward the endzone, with the ball coming loose as he stretched out while landing. Because he did not maintain possession upon hitting the ground, the referees ruled it was an incompletion.

With most NFL followers and analysts screaming that Dez had completed the catch and made a “football move” to dive for the endzone, the referees stood their ground on the incompletion call. After the game, Dean Blandino was back in the spotlight as he again supported the officials and their interpretation of the rulebook.

Given the majority view that the Dez Bryant play was indeed a completed catch, one might conclude that Blandino was biased against the Cowboys in the immediate aftermath of the Detroit game and the party bus implications. His credibility had been called into question just a week earlier and now he was ruling against Dallas to try to restore balance.

Even if integrity wasn't the issue, Blandino's general competence was now under attack. That he doubled-down on defending the officials seemed less like genuine, objective analysis and more like blind support for his referees. Naturally, it made him a public enemy for Cowboys fans.

The Cowboys' most recent game brought with it another controversial call. Receiver Brice Butler ran out onto the field but then back to the sideline. Dallas was hit with a 15-yard penalty for unsportsmanlike conduct, per the rule that players can't join a huddle and then not participate in the next play.

The only problem is that Butler never joined a huddle. Before the offense huddled up, Butler quickly ran back off the field. This obscure ruling left many bewildered and, later on, questioning the interpretation of the rule based on what actually transpired on the field.

Of course, as he did two years prior, Dean Blandino stood by his officials and the call that was made. It reinforced the perception that he was less concerned with the accuracy of his team and more maintaining a good image and protecting the NFL shield.

Even though none of the aforementioned controversies were the clear reasons that Dallas lost its last two playoff games, that hasn't stopped Dean Blandino from becoming a target for angry Cowboys fans. Here is just a sample of the reaction on social media to the news of Dean Blandino's departure.

Some talking about how good a guy Blandino is… I DON'T CARE.

He cost us a Chip. Cost Romo a HOF legacy.

You get the idea.

Nobody thinks Dean Blandino's former job is easy. You're guaranteed to have somebody mad at you when it comes to officiating; there are no win-win situations.

Unfortunately for him, Blandino was stuck in the spotlight following two painful playoff exits from the NFL's largest fanbase. Bitterness over those losses and Dean's seeming desire to defend his officials' reputation, and perhaps his own integrity, over common sense made him a major nemesis for the Cowboys for the last few years.

His successor won't have it any easier, now having to review all plays from a centralized headquarters. Hopefully, whoever steps into the role will be able to maintain a better reputation with Cowboys Nation.

Jess Haynie
Cowboys fan since 1992, blogger since 2011. Bringing you the objectivity of an outside perspective with the passion of a die-hard fan. I love to talk to my readers, so please comment on any article and I'll be sure to respond!
Previous article
David Irving Officially Signs Exclusive Rights Tender with Cowboys
Next article
Cowboys en Español: Obteniendo un Trade Por La Selección #28, ¿Richard Sherman?

Happy Monday, Cowboys fans. I hope you all had a great Christmas and spent time with your family. We all got to see the Cowboys...
Cowboys News

With the cover release of Madden 23 being brought about this week with the legend John Madden recapturing the cover, his passing on December...