The Dallas Cowboys pass rush will be under heavy scrutiny throughout the remainder of the off-season, which is why the majority of Cowboys’ fans will be paying extra close attention to training camp this year. There’s really no way of determining how things will turn out just yet, but I decided to share with you who I think could possibly lead the team in quarterback sacks in 2017.

We are all hoping the Cowboys’ pass rush will improve this season and that the defense can effectively apply pressure to opposing QB’s. The Cowboys have some pieces to work with, but there is still that element of unknown.

I decided to break this up into three categories: the most logical candidate, the dark horse, and the player who is still a little bit under the radar. Continue reading below to find out who the three Cowboys’ pass rushers are I personally think could lead the team in QB sacks in 2017. 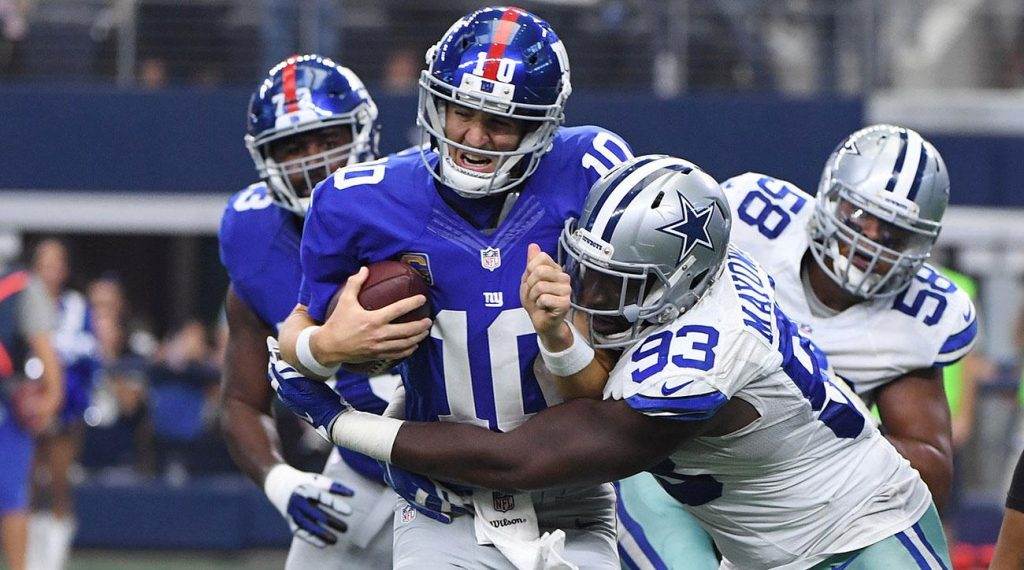 A week ago if you would’ve asked me who the most logical candidate to be the Dallas Cowboys 2017 quarterback sack leader is, I would’ve told you I think it would be David Irving. But, he is going to miss the first four games this season due to a suspension, so that seems a little unlikely now.

My next logical candidate would be DeMarcus Lawrence, since he is probably going to be the starter at one of the defensive end positions when the season kicks off. But, he has only had more than one QB sack once in the regular season in his entire career. Plus, he will be coming off his second back surgery, which is never a good thing.

No, my choice for the most logical candidate is Benson Mayowa, the best Cowboys’ pass rusher in 2016. Mayowa finished the 2016 season strong after climbing out of the doghouse from earlier in the season, finishing with a career-high six QB sacks. He should once again be the Cowboys’ pass rush specialist, and hopefully pick up where he left off last season.

The Cowboys’ pass rush is a big unknown right now, so there are number of different directions I could have went here as to who the dark horse candidate to lead the team in QB sacks will be. But, I ultimately decided to go with Damontre Moore. Yes, I know he’s a longshot to even make the team, but supposedly he’s been pretty impressive so far in practice.

Moore has been a journeyman defensive end so far in his NFL career after being selected in the third round by the New York Giants back in 2013. He hasn’t really been able to find a home so far, but he’s hoping that Dallas will be his last stop.

Moore has the talent to make the Cowboys’ pass rush better, but for some reason or another he hasn’t been able to live up to his potential just yet. He is a chance to start at the right defensive end position for the Cowboys, which is why I believe he could end up being the 2017 sack leader.

Under the Radar Candidate

My under the radar candidate to lead the Dallas Cowboys in QB sacks in 2017 had a fantastic season last year, but is often left out of the conversation when discussing the Cowboys’ pass rush. It’s a little bit odd, because he finished second on the team with five QB sacks in 2016, but it probably has a lot to do with the position he plays.

It’s not often defensive tackles lead their team in sacks, but that’s what could possibly happen this season if Maliek Collins picks up where he left off after his rookie season. Collins will once again be the starter at the 3-technique and there is reason to expect quite a bit of improvement from him entering his second year.

Collins will have the benefit of a full off-season with the Cowboys, after having to miss out on that opportunity last year due to a broken foot. He should also be quicker/stronger after a year in the strength and conditioning program. He has already been giving All-Pro offensive guard Zack Martin all he can handle in practice, which is encouraging considering Martin is arguably the best OG in the entire NFL.

Who do you think will lead the Cowboys in QB sacks?