Not much could be said about the Dallas Cowboys after getting crushed by the Arizona Cardinals. The majority who played were backups and players fighting for a spot, but many had a hard time justifying a spot. The team lost 27-3 and couldn’t get anything going offensively. Quarterbacks Cooper Rush and Mike White are both fighting to be the backup quarterback to Dak Prescott, and neither stood out.

Rush made the mistake of throwing the ball anywhere near Patrick Peterson’s area and saw his pass go to his own end zone. Mike White had one nice drive but was picked off in the end zone, throwing the ball late to his receiver.

Special teams wasn’t much better. Two returns resulted in two lost fumbles, one of which was recovered in the end zone. These plays were the actual plays that turned the game away from the Cowboys early.

Despite a horrendous game, there were a few bright spots. For one, everyone can relax. It’s just a preseason game. These games are just evaluation tools to determine who will make the final roster. Some were able to make the most of their opportunities. 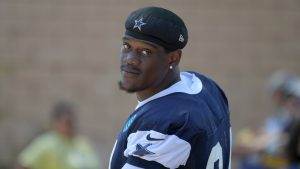 Welcome back Randy Gregory! What looked like an already deep Cowboys pass rush looks even better!

Gregory got the nod at right defensive end and put the Cardinals’ starting left tackle, D.J. Humphries, on skates.  We all recognize the sack he got, but he was also giving the left side of the offensive line fits the entire time he was out there. Pure dominance.

With Tyrone Crawford moving inside to tackle, Randy Gregory could potentially become the starter on the right side opposite DeMarcus Lawrence.  Let’s keep our fingers crossed  he can stay on the field. 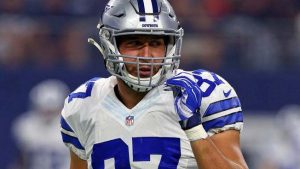 Tight end has been a question mark all offseason. Jason Witten did the Cowboys no favors by retiring and left the team wondering who would be his heir. Through the first two preseason games, no tight end stepped up to the task of being the number one option.

After the Arizona game, I believe all four have stepped up.

Each one had at least one reception, led by Rico Gathers with a team-high five receptions for 30 yards. Geoff Swaim had the biggest play of the night, a 19-yard reception. Blake Jarwin and Dalton Schultz had a small effect on the receiving game, but were both noticeably effective in blocking.

It’s a good sign to see all four players excel in different ways, but the Cowboys need consistency at the position. Especially when it looks like there’s a chance all four will be on the team this year.

Chidobe Awuzie has arguably been the Cowboys’ best and most consistent player this preseason. He has solidified himself as the clear starter opposite Byron Jones, and has demonstrated a star-caliber ceiling.

We all remember his incredibly athletic interception last week, and he followed that up with an overall great game. Not only did he stick to his receivers like flypaper, he broke up a pass and showed off his blitzing skills he honed at Colorado, grabbing a tackle in the backfield.

The Cowboys secondary has struggled in many ways this preseason. Whether it’s been from quality depth or just simply bad coverage, the Cowboys had a lot of promise in the secondary going into this season and they’ve given cause for concern. However, Chidobe Awuzie has been outstanding.

If the Cowboys will need to rely on the backend of the defense, they can relax just a little bit thanks to number 24.

Obviously, the hype on the defense includes Linebackers Jaylon Smith and Sean Lee headlining the middle. Throw in Damien Wilson and first round draft pick, Leighton Vander Esch, to add to it. But against the Cardinals, it’s the linebackers fighting for a spot that made the biggest impressions.

If you count all the names mentioned, that’s seven linebackers. Typically, the Cowboys keep around only six, so one of these players may not be around next week. If all seven do make the team, we should be excited for all of them. 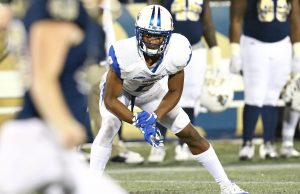 The Cowboys have a knack for finding quality undrafted free agents. Players like Kameron Kelly were getting a lot of hype at the beginning of camp, and a player like Tyree Robinson has made the most of his opportunities and looks like a potential roster player.

Another player who has made the most of his opportunities is Charvarius Ward. He led the team in tackles in the team’s first preseason game, and had a pair of passes defended against Arizona.

His one-on-one coverage and tackling have been impressive considering he is an undrafted rookie, and it may land him a spot on the team. 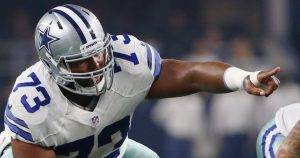 Obviously, NFL fans everywhere wish Travis Frederick a quick and healthy recovery. He’ll need all the love and support he can get. Until he returns, however, there’s still football to be played.

The veteran, Joe Looney, is positioned to step in and be the starter until Frederick returns. Not just against Arizona, but Joe Looney has looked solid the last three weeks. He and Dak Prescott have a connection and there hasn’t been any missed steps along the line.

It’s unclear how long Travis Frederick will be out, but Cowboys fans and Frederick himself can rest a little bit easier knowing that the team looks like it will be in good hands. There wasn’t much to celebrate after Arizona beat down the Cowboys, but Joe Looney is one positive that we can take away from the game.