If you ask an NFL player he’ll likely say that the only thing more important to him than football is his family, and the family of Dallas Cowboys QB Tony Romo is going to grow by one! Tony Romo and his wife Candice are expecting their third child this August!

Babies are blessings & the Romos are having a third! Congrats to Candice & Tony. She’s one of the best moms I know.

Tony and Candice Romo already have two boys, Hawkins Crawford (4 years old) and Rivers (2 years old). Their family has been the First Family of the Dallas Cowboys for quite some time, but with Romo’s status on America’s Team subject to change soon… the four Romos and the new little bundle of joy will be someone else’s First Family in 2017. Or will they?

Many have speculated about the place Tony Romo will be playing quarterback this coming football season. Denver, Kansas City, Houston, New York (Jets), Chicago, and many others were options (the Arizona hype cooled last week when Carson Palmer announced his 2017 return).

When you combine the recent Romo-retires-to-tv rumors with the announcement of the third baby Romo, your wonderment about his 2017 status starts to hit a new gear. I’m not a father personally, but my Dad has always told me that becoming one changes you. You see the world differently, and NFL players are not immune to the responsibilities that fatherhood brings.

The Romos have lived so much of their life in the public eye that we know about how close they are. With the family growing to five, and with it happening in August, is Tony going to want to be away from that? This baby will be born in August, when he’s seemingly going to be in the middle of NFL Preseason action. Then what? 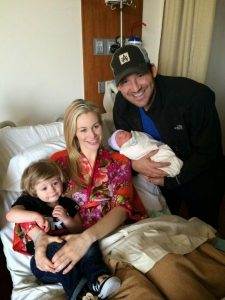 Will Tony just go back to his new home in Denver, Kansas City, New York, or Chicago for the season? Will his family move there with him? Or will they stay in their Dallas mansion (home to the occasional Dallas Cowboys soiree)? We’re not trying to pry into the family-made decisions of the Romos, but with his status as one of the leading storylines of the offseason… it really makes you wonder.

If you subscribe to the notion that fatherhood changes you, imagine that change multiplied by now three for Tony. Does a third child – a newborn at that – make Tony want to stay closer to home? Does this mean Houston is the leading contender for his 2017 services? Does he want to stay in Dallas if possible now? Or is he suddenly more inclined for the broadcaster life that reduces the rigors NFL players go through on a weekly basis?

These are all questions floating around the confines of Cowboys Nation with the announcement of a new Romo. We’re just about a month away from hopefully having some answers so for now let’s just be happy for Tony, Candice, Hawkins Crawford, and Rivers. We’ll plan a baby shower! You get the chips and I’ll bring the soda, this party will be sweet.

Tell us what you think about “Cowboys QB Tony Romo And Family Expecting This August” in the comments below. You can also email me at RJ.Ochoa@SlantSports.com, or Tweet to me at @RJOchoa!