The Dallas Cowboys will get extra time to figure out what went wrong against Washington. Their Week 13 game against the Baltimore Ravens, previously scheduled for next Thursday, has bene postponed to Monday, December 7th due the Ravens' COVID-19 outbreak.

So as not to conflict with Monday Night Football, the Cowboys-Ravens game will have the rare 5:00 pm EST start time.

Cowboys-Ravens has been pushed from Thursday to Monday at 5.

#Ravens QB Lamar Jackson's positive test came in Thursday's round of COVID-19 testing. He still won't play Tuesday night against the #Steelers, but based on the timeline, it's possible he could be cleared in time for the rescheduled Dec. 7 game against the #Cowboys.

This now gives the Cowboys a 10-day break between their crushing Week 12 loss to the Football Team. And given today's news about Zack Martin's injury, that extra time could come in handy.

If nothing else it gives Dallas some extra time to get Brandon Knight and Terence Steele ready for the Ravens defense as the starting offensive tackles. Both Maritn and Cam Erving left yesterday's game with injuries and, as of today, were expected to miss multiple weeks.

Could the extra time until the Baltimore game allow at least one or both players to return?

However it plays out, this rescheduled game promises to have some added intrigue and nuance as the NFL tries it make it through the unique challenges of playing during a pandemic.

Cowboys with the added rest and the return of botb martin and erving will upset the Ravens ! You heard it here 1st.

Who is the Cowboys starting quarterback? 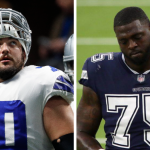 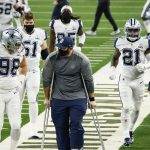