Should Cowboys Take A Chance On QB Johnny Manziel?

The decision by the Dallas Cowboys to re-sign Kellen Moore likely means that he is the backup quarterback to Dak Prescott for 2017. I actually don't have a problem with the move because I doubt there is another QB in the entire NFL that knows offensive coordinator Scott Linehan's offense as well Moore. But, at the same time I believe in creating competition, which led me to the thought of whether or not the Cowboys should take a chance on QB Johnny Manziel?

My fellow Staff Writer, Jess Haynie, wrote an article earlier this week about whether or not the Cowboys should keep looking for a QB talent. If you haven't read it yet, then I definitely recommend it. In the article, he mentions several available free agent QBs that could be of interest to the Dallas Cowboys, but Johnny Manziel wasn't one of them.

You see, like Jess, a lot of people have completely forgotten or written off Manziel ever playing in the NFL again, let alone for the Dallas Cowboys. But, it is really starting to look as if the young troubled QB is serious about resurrecting his career.

At the beginning of March, Manziel rehired his agent Eric Burkhardt. That started a few rumors that there were teams around the NFL that could be interested in bringing him aboard. But, that's all there was were rumors. That is until Ian Rapoport identified via twitter one of Manziel's potential suitors.

FA QB Johnny Manziel has kept a low-profile as he trains for a return. #Saints coach Sean Payton appears to have taken an interest in him.

It's not all that surprising the New Orleans Saints could be one of his suitors with QB Drew Brees getting up there in age. The Saints currently don't have his successor on the team and could probably use an upgrade at the backup QB position as well.

I'm sure by now you're thinking to yourself why should we as Cowboys fans care if the Saints have an interest in Johnny Manziel? Well, I think it all comes back to Owner/GM, Jerry Jones. 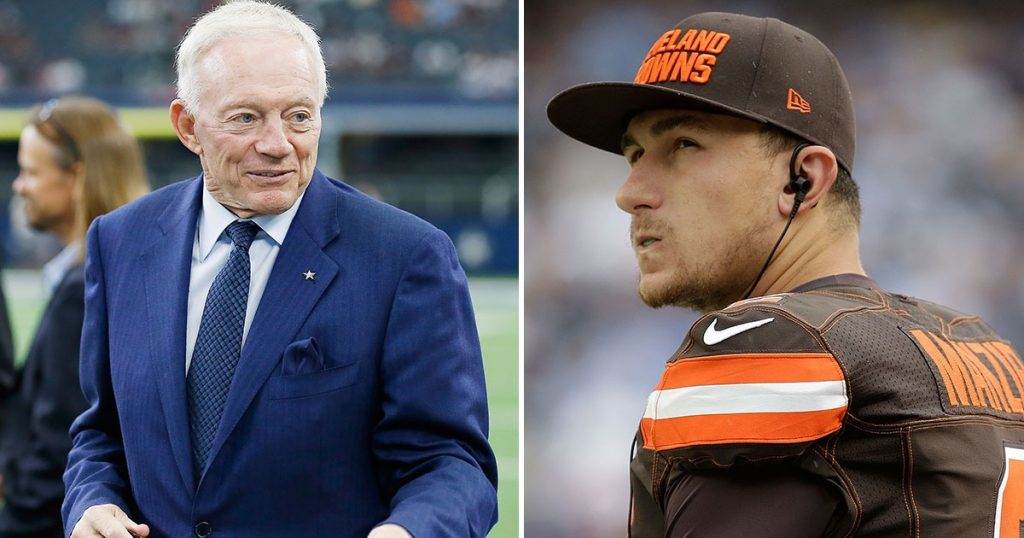 Jerry Jones has always had an infatuation with Johnny Manziel. Jones was all set to draft Manziel with the Cowboys first-round draft pick in the 2014 NFL Draft. Fortunately, that never happened, but you can bet that JJ has been keeping up-to-date with the goings-on involving Manziel. This recent news of the Saints interest in the former Texas A&M star has probably only reignited that fire.

You see, Jerry Jones and New Orleans Saints head coach Sean Payton have a very good relationship with one another. You can bet that if Sean Payton has an interest in Johnny Manziel, then Jerry Jones shares that interest, especially with his prior infatuation.

I think Johnny “Football” is like an itch that Jerry Jones just can't scratch. The only way for Jerry Jones to ever get rid of that pestering itch is to finally add Johnny Manziel to the Cowboys roster and see if the young QB still has any of that magic left in his tank that made him a Heisman Trophy winner.

I'm personally a little intrigued by the idea as long as the Dallas Cowboys protect themselves just in case Johnny Manziel reverts to his partying ways. It would definitely have to be a team friendly/prove it kind of contract, but I think that's what he would likely receive from any team.

I would just like to see what Manziel could do if he actually focused on his craft. I think he would do that with the Cowboys. They have a strong locker room full of leaders and they are all players that hold each other accountable. That could be exactly what he needs.

Manziel hasn't really proven he can be a starter in the NFL. He has only started eight games in his career throwing for 1,675 yards, seven touchdowns, and seven interceptions. But, he would be nothing more than a QB3/scout team player for the Dallas Cowboys and he could create competition for Kellen Moore, possibly becoming the backup to Dak Prescott.

This could be one of those risk/reward situations we have seen the Cowboys take in the past.

Do you think the Cowboys should take a chance on Johnny Manziel?

Bring him into camp on a make-good contract. no guarantees. Hes got a lot to prove to everyone

That’s about the only way I would consider adding him to the Cowboys roster.

Brian Brian Brian please y’all stop with the Johnny Football crap that is only pushed by you writers. A National writer wrote last week that breaking the news of his breakfast with Peyton was a ploy by his agent to get his name circulating out there again. I truly hope Jerry is over his itch and lets this pass on by. I live in East Texas and we get a butt load of info on him and I wouldn’t say he’s totally cleaned his act up. And NO do not bring him anywhere near camp…!

Don, it’s not being pushed by us writers. Jerry Jones himself has stated that if Manziel can get his life together, he would consider bringing him aboard. I am a little bit intrigued by the idea of adding him to the roster, but only if it benefits the Cowboys. I personally don’t think it will ever happen. I think the organization is starting to shy away from “troubled” players. At least I hope so.

Yes we are all well aware of Jerry’s mouth and that gives fodder to the media to run with such as this case when the original article was written that Johnny met and dined with Sean. Cowboys weren’t mentioned and now they are so yes the media helps drive this. I hope he isn’t considered and I also feel sorry for his family here since the embarrassment was too much for them for a while. I also hope the Cowboys are shying away from these troubled players as well.

Trade Dak Prescott to the Browns for #1 draft pick, my have to trade 1st round draft picks to get this deal done, draft Myles Garrett, sign Manziel as backup to Romo, restructure Romo’s contract, see if DeMarcos Ware will come back for one more super bowl run