One area in which the 8-6 Dallas Cowboys have faced a ton of criticism this season is with their passing game. Even without Ezekiel Elliott, the running game has given the offense *enough* most weeks. Failure to deliver through the air plagued Dallas greatly during their three game losing skid, however.

While it wasn't always pretty Sunday Night in Oakland, Dak Prescott and the Cowboys made enough plays over the top of the Raiders defense to pull out a key victory. One play in particular aided them heavily early one, creating two deep receptions to tight ends. One of which set up the game's first touchdown.

How did the Cowboys execute these big plays? One word – Scissors.

The scissors concept is pretty simple to grasp. The inside receiver runs a corner route while the outside receiver crosses him and runs a post route. The route combination quite literally forms a scissor, hence the name. This is a half-field read for the quarterback and his progression goes from post to corner most often.

Typically, this route combination is ideal verse 2-high. In this instance the outside receiver's release will hold the cornerback, leaving the safety (who is responsible for the deep half of the field) to defend both the corner route and post route in his zone.

The first time the Cowboys went to this route concept, however, the Raiders rotated down to a cover 3 look. At first Oakland showed two-deep, but the near safety rolled down towards the line of scrimmage pre-snap. This left cover three behind him, and Dak Prescott was able to pick apart the secondary. 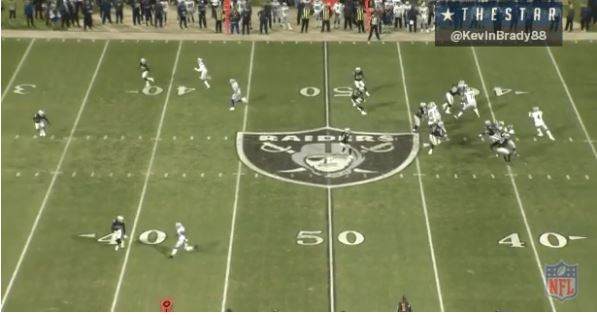 At this point in the play you can see the cornerback at the top of the screen flip his hips and run with Terrance Williams. The safety is rolling towards the middle of the field as he is responsible for the deep-middle, leaving that far corner in quite the bind. 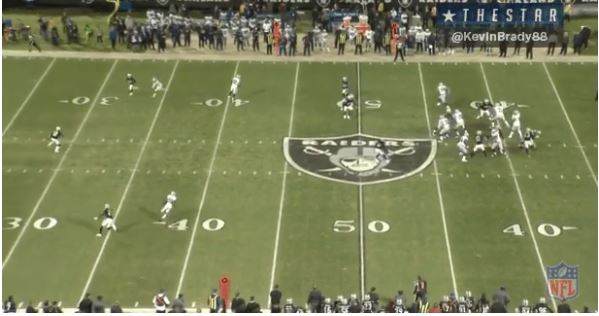 A few moments later we see Jason Witten break off his route towards the sideline. Typically, scissors is taught for the inside receiver to cross underneath the post route, and considering the cushion being afforded here it appears to make a lot of sense.

The far cornerback should peel off of Williams and work back towards Witten, as he is responsible for that deep-third of the field. This would leave the deep safety to account for Williams across the middle. Instead he sticks with Beasley and the linebacker underneath fails to get enough depth to affect Prescott's read whatsoever.

So since the safety doesn't get the post, the corner doesn't peel off and get to Witten, and the linebacker isn't able to get enough depth in his zone (in Madden, we call what he needs to do a “purple zone”), Prescott finds Witten for an easy completion down the field.

Just two possessions later the Cowboys come back to scissors concept, this time on the opposite side of the field. James Hanna is lined up inline, and with Terrance Williams being the only wide-out on the field, I'm sure Oakland was expecting a run play.

Oakland is sitting in cover 3 again this time, and the failure of the playside cornerback to peel off the post route once again does them in. Still, credit must be given to the Cowboys coaching staff for recognizing this area of vulnerability in the Raiders' defense and exploiting it during the game.

Also, credit Dak Prescott for not simply attacking what may have seemed like a one-on-one chance to Dez Bryant and instead remaining patient in his half-field read until Witten cleared underneath Beasley for the easy completion.

Kevin Bradyhttps://kevinrobertbrady.wordpress.com
Die-hard Cowboys fan from the Northeast, so you know I am here to defend the 'boys whenever necessary. Began writing for a WordPress Cowboys Blog, and have been with ITS since 2016.
Previous article
Can Tyron Smith Tough it Out a Little Longer?
Next article
The Seattle Seahawks Remain Critical To Recent Cowboys History

Cowboys Need to be Better vs Leonard Williams This Time Around

There was a lot that went wrong for the Dallas Cowboys in their week six trip to New York to face the Jets. In...
Read more
Cowboys News

New Dallas Cowboys offensive coordinator Kellen Moore has been showered with praise through his first three weeks on the job. And, deservingly so. Moore's offensive...
Read more
Game Notes

After the Cowboys demolished the New York Giants en route to a 35-17 victory on Sunday, the entire NFL world stopped to praise Kellen...
Read more

in the first video, scissors route, that sure looks like 83 as the Z WR not 11.

in the throw to 84, although a completion, that ball needs to get there quicker to allow hanna to make a play after the catch. i know it’s off PA but dak kinda takes his time to deliver the pass. ball should be out before 84 makes his break.

dak needs to work on this, his route anticipation, as it’s pretty obvious who is going to be open once the CB runs with 83.

Dak needs to hit the receivers earlier, it is something that I thought he would have worked on this last off-season. I think he is so focused on not throwing interceptions that he waits too long.

Dak’s not really an anticipation thrower. This may come, it may not. But good to remember he’s only in year two. Thanks for reading!