Cowboys Vs Eagles: The Hope That Dak Prescott Provides

Trailing by ten at the start of the fourth quarter, the Cowboys appeared to be taken off their game for the first time all season as they hosted the Eagles at 5-1 off the bye last year. QB Dak Prescott had completed just 13 of 30 passes through the first three quarters, as the Cowboys mounted little against a stout Eagles defense.

I distinctly remember watching this game with a decreasing interest throughout the late night that is Sunday Night Football. Simply put, the Dallas Cowboys needed something to happen.

Fast forward to tomorrow night, and the Cowboys again need something positive to happen against the division leading Eagles. This time though, through a trying season that most recently featured a brutal 27-7 loss in Atlanta, Cowboys Nation knows where to turn for hope prior to kickoff – none other than Dak Prescott.

The 2016 season spoiled Cowboys fans by putting a slew of draft picks that contributed to a 13-3 campaign on the field together. There is hope that 2017 can still play out very similarly, as Taco Charlton has taken strides at DE, Jourdan Lewis has been a star at CB, Xavier Woods has flashed at S, and Chidobe Awuzie gets set to return to the field this week.

They'll still play five more games without RB Ezekiel Elliott, but the most important thing to come out of this season so far for the Cowboys is that they turned a fourth round pick into a franchise quarterback – nobody will deny this.

Through games without Sean Lee, Tyron Smith, or Zeke, Prescott has done everything Dallas has asked of him and kept them in all but one game the best he can.

He woke me up from my living room when he led a fourth quarter touchdown drive to tie the game against Philadelphia a year ago, following this up by taking the ball first in overtime and never looking back.

So much can change in such a short period of time in the NFL, and it feels like ages ago that Prescott found Jason Witten to beat the Eagles on October 30th, 2016. Since then, the Eagles have gotten significantly better on both sides of the ball, and it feels safe to say the Cowboys have regressed. 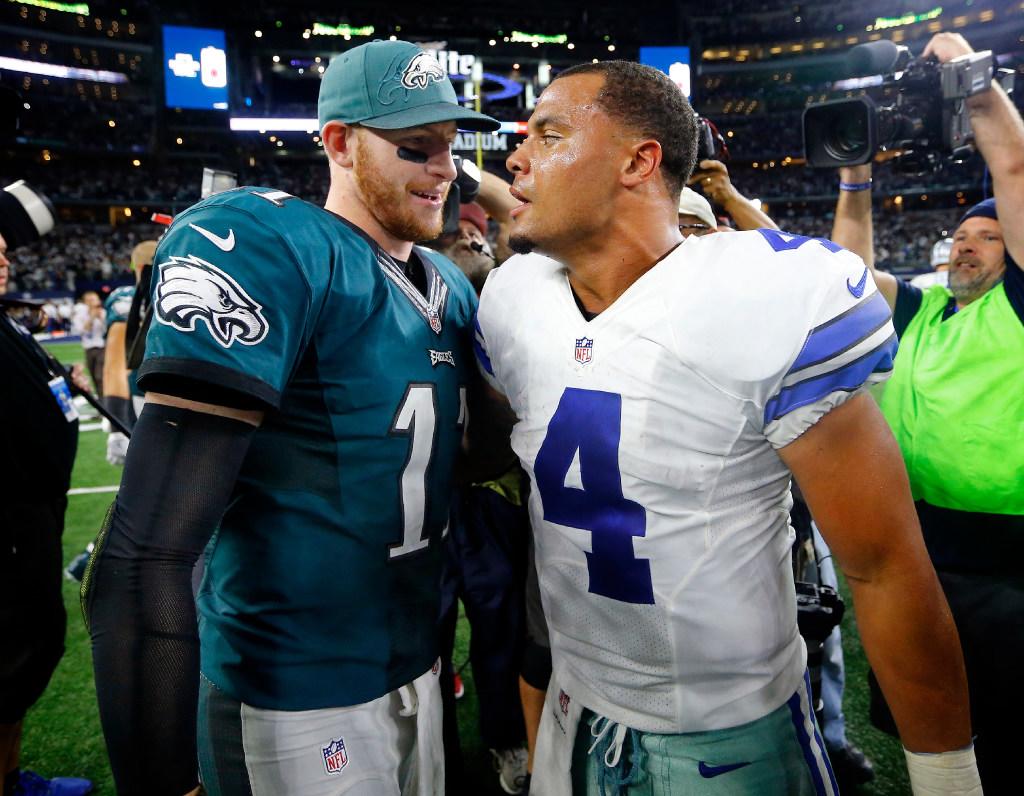 It also feels safe still to say the Cowboys will have the better quarterback on the field against Carson Wentz and the Eagles, giving them a chance to bounce back with a massive win to send them into Thanksgiving against the beatable Chargers at 6-4.

The Cowboys are a young team, and developing youth takes time as well as culture. Thanks to Dak Prescott, the Cowboys have both, as their young franchise quarterback sets the tone in Dallas that a season in need of saving tomorrow night is far from over.

Dallas was interested in Prescott even before the draft of 2016, and although Dallas was very fortunate to land the caliber of Prescott at qb in the 4th round, and I’m glad they did, I can see why they were even more intrigued by Wentz. I feel certain Dallas would have drafted him if the Eagles had not traded up before Dallas for him. Sad to say, I’m not sure Dallas has the better qb. We’ll know more as the years go by.

The Cowboys coached Wentz at the Senior Bowl that year, which is a rare opportunity to get to know a top quarterback better than other teams around the league.

Thank you for reading John.

It’s too bad that if a regular Joe like me know who the Cowboys are interested in, you can darn sure know that the eagles, and all others know also. Some in the know in Dallas need to quit writing/leaking so darn much